Things to do in Costa Rica

Every country has its outstanding and special attractions. Goway has selected its Top 15 things to do in Costa Rica (not in any particular order) for you to enjoy on your visit to this destination. 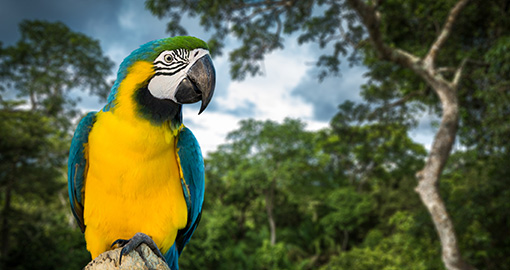 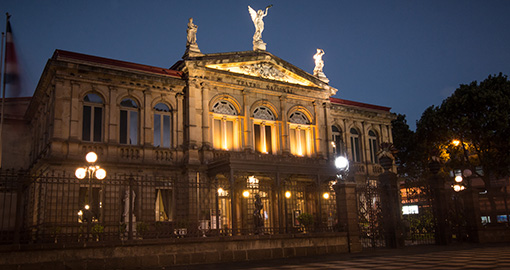 This is San Jose’s most revered building. It was built in 1897 and is known for its neoclassic facade, lavish marble lobby and auditorium that are both filled with paintings depicting 19th Century life. The theatre's most famous painting is Alegoria al café y el banano, an idyllic canvas showing coffee and banana harvests. Tours of the theatre are conducted hourly on Costa Rica vacations. There are several floors which you can explore. The most impressive room is the lobby where there is a huge painting on the ceiling, delicately carved statues and wonderful chandeliers. There are performances several times a week. The National Symphonic Orchestra (NSO) includes both Costa Rican and foreign composers. 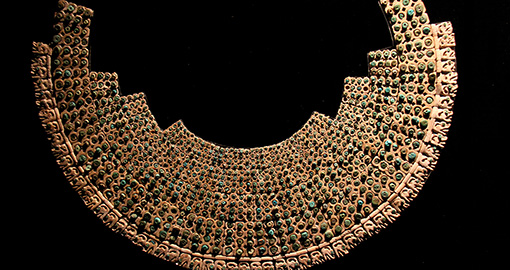 Jade is a semi-precious stone valued for its beautiful colours and translucent qualities. In this museum are over 7000 items. Most of these are dated between 500 BC and 300 BC. During that period, the jade trade was at its peak. Most of the jade pieces are images of animals and depictions of societal organization. Jade artwork and jewellery were used for ornamentation and often emphasized religious rituals. The museum highlights the trading of jade in ancient times and the use of jade in religion, war and burial rites. There are other works of gold, ceramic and stone to be seen on a Costa Rica vacation as well as the jade pieces. Items on display in the museum are enhanced with detailed graphics, maps, and textual explanations. 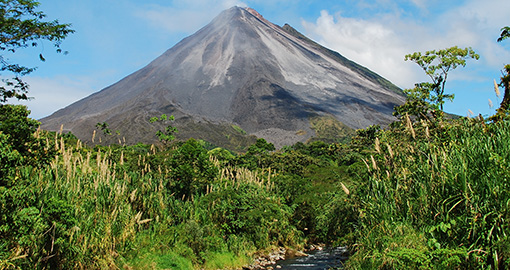 The volcano in the Arenal Volcano National Park was the most active in the country. It had previously been believed to be dormant until a major eruption in 1968. One of the world's most active volcanoes, it stands more than 1550 metres/5000 feet high Frequent eruptions continued until 2010 when the volcano re-entered a non-active state. The Arenal Observatory Lodge sits in an ideal viewing spot along the volcano's northern side. The easiest way to access Arenal Volcano is from the nearby base village of La Fortuna where you can join a tour. In and around the park are various lodges and hotels some with their own hot springs and others focused on the wildlife of the area. The park is popular with birders as most of the 850 species identified in Costa Rica can be found within its borders. Animal species living within the park include white-faced capuchin monkeys, jaguar, deer, coati and snakes. Activities to consider undertaking include visiting hot springs, hiking, river rafting, kayaking, take a sky tram ride and horseback riding. You can even attend a chocolate cooking class! 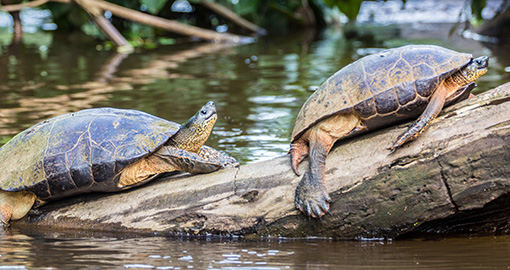 Despite its remote location, it is the third-most visited park on a Costa Rica vacation reached only by aeroplane or boat. The park has a large variety of biological diversity including rainforests, mangrove forests, swamps, beaches, and lagoons. Set in a natural wetland on the Caribbean coast. The park contains both marine and land areas. It was created to protect the Green turtle since this nesting area is the most important in the Western Caribbean. One of the major attractions is the laying of sea turtle eggs including those of the giant Leatherback turtle, the Green turtle, the Loggerhead, and the Hawksbill. All of these are endangered species. Activities here include turtle watching tours and visiting the Turtle Conservation Museum, bird watching, guided jungle walks, kayaking, fishing and swimming in the Caribbean Sea. 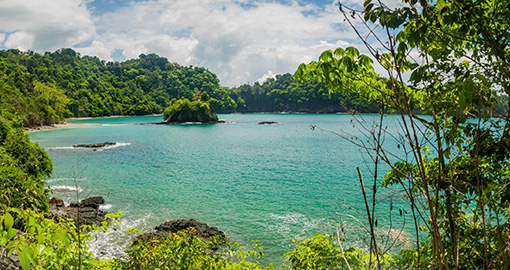 This park is listed as among the world’s 12 most beautiful national parks. Located on the Pacific Ocean, it is the smallest of all the Costa Rican national parks but is well known for its beautiful beaches and hiking trails. This park has one of the most impressive landscapes in the world and has white sand beaches and lush foliage amid large mountains and forests that reach right down to the beaches. It has a large land and marine biodiversity with beautiful coral reefs and with 109 species of mammals and 184 species of birds. Dolphins can be seen here as well as the occasional migrating whale. Scuba diving, snorkeling, sea kayaking, mountain biking and hiking all combine well to allow you to experience the tropical wildlife that enriches the Manuel Antonio National Park. 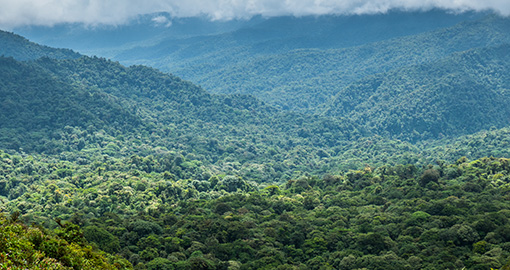 The cloud forests around Monteverde and nearby Santa Elena are among Costa Rica’s premier destinations for everyone on Costa Rica vacations from budget backpackers to affluent retirees. It was recently voted one of the "7 Wonders of Costa Rica" by the Costa Rican newspaper La Nacion. It is a private nature reserve and in its midst, you will find an orchid garden, a butterfly garden, a bat jungle and a coffee farm and a cheese factory both of which you can visit. You might like to join a guided walk through this unique tropical ecosystem. A wide range of animals lives within the reserve including sloths, agouti, jaguars and several types of monkeys. There are over 2500 plant species and tens of thousands of insect species which reside here. Other activities include bird watching, horseback riding and boat rides. 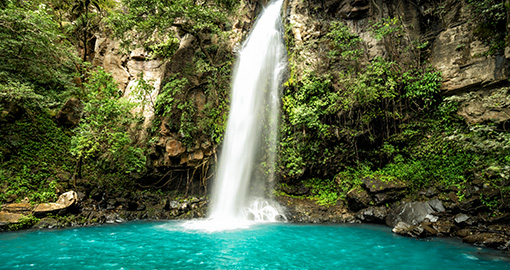 Rincon de la Viejo translates as “The old woman’s corner” supposedly named after a witch by indigenous tribe people. It is an inactive volcano at present standing 1915 metres/6290 feet above sea level. The volcano, one of six active volcanoes in Costa Rica, has a large number of hot pools and areas of bubbling mud areas on the slopes of the volcano indicating substantial reserves of geothermal energy. Trails extend from the Santa Maria ranger station and wind through the park passing hot springs and waterfalls along the way. There are mammals within the park and including sloths, tapirs, pumas, jaguar, and both howler and spider monkeys Access to the crater is no longer available due to an eruption in 2016 when volcanic ash and mud rose over 120 feet from the regular crater lagoon. Several lodges, resorts and hotels in the area offer hiking, forest canopy tours, horseback riding, river-rafting, all-terrain-vehicle riding and wall-climbing. 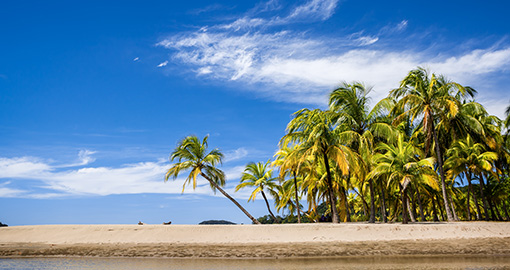 Costa Rica beaches are known for their white sand and clear waters. The beach at Playa Carrillo on the Pacific Ocean is no exception. Located on the Nicoya Peninsula in the province of Guanacaste Playa Carrillo is a perfect beach destination. Puerto Carrillo is a hillside town known for its laid-back atmosphere. The beach itself is quiet and lined with palm trees, an ideal place for families. It is one of the cleanest beaches in the country. Activities include snorkeling, coral reef, swimming, kayaking, jet skiing, water skiing, sports fishing and windsurfing. If you take the road to the southern end of the bay where it climbs the hill to the town, you will find a lookout perfect for enjoying the breathtaking Costa Rica sunset. 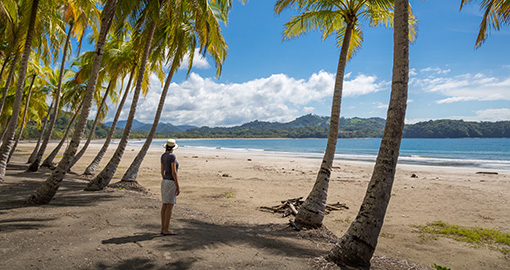 Located not far from Playa Carillo, this beach resort is one of the prettiest and safest beaches in Costa Rica. Playa Samara offers wonderful white sand which contrasts with the aquamarine colour of the sea. The resort has stores, restaurants, hotels and a small selection of bars. The town's nightlife can be found at one of its discos. Sport fishing is a popular activity here as is snorkeling and scuba diving around the coral reefs. Swimming conditions in Samara's calm coastal waters are ideal. Again, it is perfect for families. 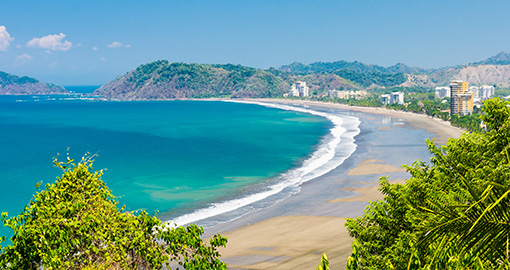 Jaco Beach is the closest major beach destination to San Jose on a Costa Rica vacation. It is located in a wide cove with rocky points at each end. The beach has a backdrop of palm trees, surfside hotels, souvenir and boutique shops and a large selection of restaurants and bars. It is considered to be one of Costa Rica’s most developed beach towns and has developed a reputation over the years for its party atmosphere (mostly in the bars) but in recent years has put a lot of effort into making it an attractive place to visit for everyone, including families. One of the main attractions of Jaco is the endless list of activities available. This includes surfing as Jaco has a world-class surfing beach known for having the most consistent waves in the country. Close to the town is the Carara National Park, a vast expanse of pristine rainforest. Along any of the trails, you can see wildlife like monkeys, leaf-cutter ants, and lots of birds. Carara is considered to be one of the best birding spots in Costa Rica with over 400 different species identified. 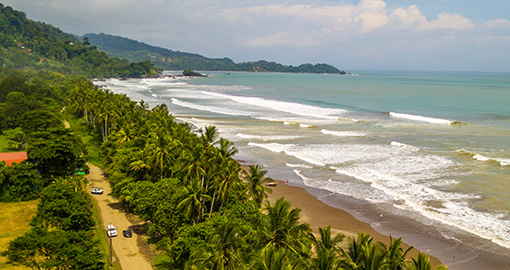 Dominical is a fishing village turned surfing hot spot that attracts a distinctly bohemian crowd. Despite its popularity on the backpacker circuit, it’s still pretty low-key. The beach road is lined with small hotels and open-air restaurants. You can watch as surfers take on one of the most powerful waves in the country. Dominical is all about surfing. Waves can grow to 3 metres/10 feet off the shore tall enough to please even hard-core thrill-seekers. 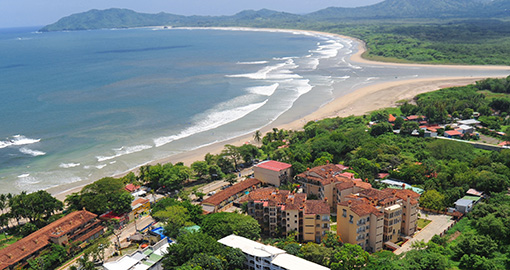 One of Costa Rica’s most popular beaches, Tamarindo is an action-packed destination known for great beginner surf and lively nightlife. For nonstop action, Tamarindo is hard to beat. The town is also surrounded by Las Baulas National Park, which protects endangered leatherback sea turtles that nest on nearby beaches. Some eco-friendly activities are available in Tamarindo and neighbouring beaches and include watching turtles during their nesting season, diving, snorkeling, horseback riding and fishing. 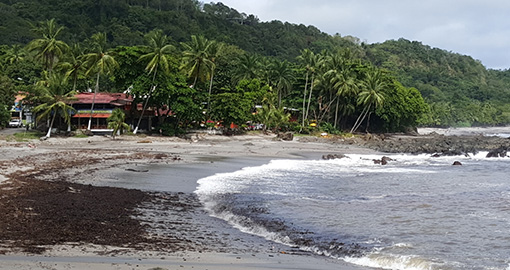 Montezuma Beach is out-of-the-way and filled with natural beauty. The fishing village of Montezuma is perfect for a quiet vacation. There is no major development and the town centre has just a few restaurants, hotels and shops. If you walk down the beach, you will find a unique freshwater waterfall right on the sand with pools for swimming. Montezuma’s beaches have been voted to be among the top ten most beautiful in Central America, not just because they have the whitest sand and the clearest turquoise water but because the combination of water, sand, rocks, jungle, streams and beach waterfalls make it very beautiful here on Costa Rica vacations. 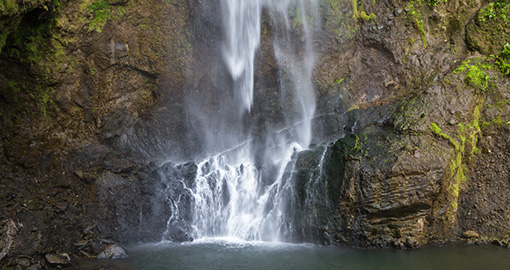 Viento Fresco, which means cool wind, is a series of five cascades. This includes the spectacular Arco Iris (Rainbow Falls), which drops 75 metres/244 feet into a refreshing shallow pool that is perfect for swimming. Another waterfall here is the Serena River Waterfall which drops 31 metres/102 feet into a pool. The area surrounding the waterfalls is abundant with colourful flowers and grassy areas making it an ideal spot to simply relax or have a picnic. There are trails are well which are well-maintained and there are no crowds to mar the natural beauty of this place.