Located to the west of continental Ecuador, the Galápagos Islands are an archipelago of volcanic islands on either side of the Equator in the Pacific Ocean. The islands are also a national park and marine reserve.

In 1978 the area was named a UNESCO World Heritage Site and in 1985 it became a biosphere reserve. The islands are an ecological wonderland populated with fearless and incredible wildlife. The largest living tortoise species, the Galápagos Tortoise is famous for its long lifespan and can weigh over 400 kg (880 lbs). The distinctive blue-footed booby is synonymous with the islands, and so too are the colonies of curious sea lions. Besides unique wildlife, there are also excellent beaches that welcome swimming, diving and surfing. A visit to the Galápagos Islands is a truly spectacular experience that continues to attract tourists from around the world.

The following "nature" calendar of the Galapagos may help you decide when you want to travel. 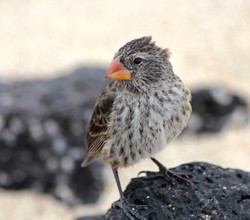 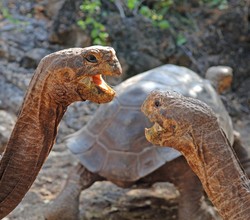 Climate changes in Galapagos What makes the islands an outstanding destination? February is the most important month during the Hot Season. At this time of the year, the islands not only adopt an emerald-green color, and turn humid and balmy warm, but many species start reproducing now. For these, this time is the only one where they have their best chance to pass their genes to the next generation. Thus, February is a month when lots of unique and exciting things exclusively happen. The experience is quite unique for our guests, and no one should miss seeing this amazing realm. A couple of highlights include the Marine Iguanas (especially those in Punta Espinoza, Fernandina Island and Punta Suarez, Española Island) with eye-catching colors, and nesting behaviour. But of course, the most committed effort goes to the frigate birds. Males will display their scarlet-red gular pouches as they try to attract a passing female. Such wildlife encounters will continue until the end of April, but it is during February, March and April when the most rewarding natural events and wildlife encounters will occur.

The marine environment deserves special attention, since the warm waters stationed at the Panamic Province, are ready to head down south while bathing the Gal·pagos. We expect water temperatures to range between 24°C and 27°C (76°F and 80°F), and visibility to be generally good (15-18 metres; 50-60 feet). Having a marine tropical ecosystem next to penguins and sea lions (that come from much colder and temperate environments) is another enriching wildlife experience. What other tropical destination on Earth has a penguin? Of course, zoos donít count! The Galapagos Marine Reserve will delight every single explorer, particularly at the most western islands of the archipelago (Isabela & Fernandina). Snorkeling and glass-bottom boat outings are adventures you should not miss.

At Goway we believe that a well-informed traveller is a safer traveller. With this in mind, we have compiled an easy-to-navigate travel information section dedicated to Ecuador.

Learn about the history and culture of Ecuador, the must-try food and drink, and what to pack in your suitcase. Read about Ecuador's nature and wildlife, weather and geography, along with 'Country Quickfacts' compiled by our travel experts. Our globetrotting tips, as well as our visa and health information will help ensure you're properly prepared for a safe and enjoyable trip. The only way you could possibly learn more is by embarking on your journey and discovering Ecuador for yourself. Start exploring… book one of our Ecuador tours today!

After your Ecuador vacation packages, why not consider another of Goway's Latin America tours. These include a large selection of other exciting countries in Central and South America. We offer Chile vacation packages and Easter Island tours, Peru vacation packages which include Machu Picchu tours and Brazil tours including Iguassu Falls tours among many others.

Book your Ecuador tour with Goway!

LATIN AMERICA by Goway is an exclusive division that specializes in planning and organizing Ecuador tours and experiences. Choose from a simple city stopover,  a cruise to the Galapagos Islands, a Holiday of a Lifetime tour, a small group tour and much more. We want to be your first choice when next you go globetrotting to Ecuador.