Things to do in Ecuador

Every country has its outstanding and special attractions. Goway has selected its top 12 things to do in Ecuador (not in any particular order) for you to enjoy on your visit to this destination. 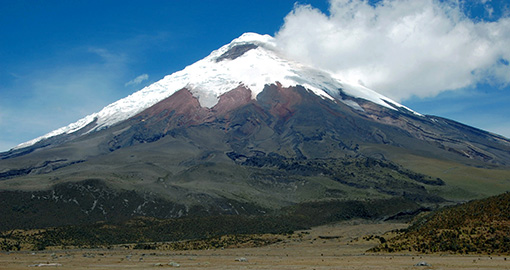 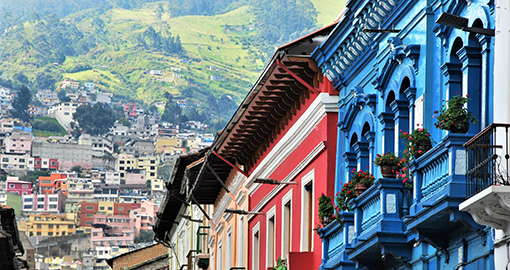 This is Quito’s major attraction and a UNESCO World Heritage site on an Ecuador vacation. It is not very big but full of old buildings - churches, monasteries, convents, museums and other architectural gems many dating back to the early 16th Century. It contains the largest concentration of historically valuable architecture in Latin America. The main squares are Plaza del Teatro, home to the Teatro Sucre, known for its ballet, opera and theatrical and musical performances, Plaza de la Independencia, Plaza Santo Domingo and Plaza San Francisco with their cafes, restaurants and artisan shops. Excellent museums include the Museo de La Ciudad (City Museum) which chronicles the history of Quito, the Museo Alberto Mena Caamano and its waxworks, the Museo Camilo Egas, a retrospective of one of Ecuador’s greatest artists and the Casa de Sucre, dedicated to the memory of its most famous occupant, the Venezuelan independence hero, Marshal Antonio José de Sucre. 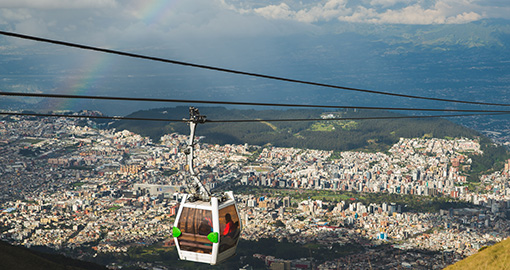 The Teleferico is a gondola lift in Quito runs from the edge of the city up the side of the Pichincha Volcano to a lookout point called Cruz Loma. It is one of the highest aerial lifts in the world travelling up to 3,945 metres/12,943 feet. The ascent takes about twenty minutes. At the top, there are observation points affording great photo opportunities due to the spectacular views of the city of Quito and on clear days, the Andes Mountains. 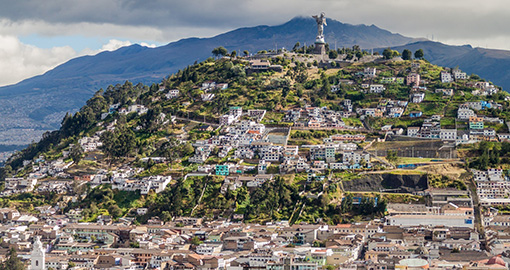 El Panecillo, a major landmark in the city, is a 200-metre/650 feet high hill of volcanic-origin just outside of Quito. It is topped by a 41 metre/133 feet tall, 7000-piece aluminum statue of the Virgin of Quito with a crown of stars, angelic wings and a chained dragon. There are wonderful views of Quito below on an Ecuador tour. You can climb up the steps of the statue for even better views. The hill was named Panecillo as it has a resemblance to a small piece of bread. 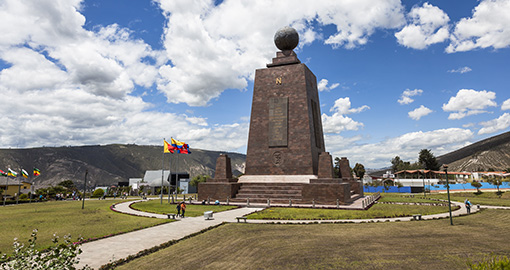 This translated as Middle of the World City and is a place 26 kilometres/16 miles north of Quito. The grounds contain the Monument to the Equator which highlights the exact location of the Equator (from which Ecuador takes its name). The Ethnographic Museum Middle of the Earth here is a museum about the indigenous people of Ecuador. There is a 30 metre/97-foot high monument built to commemorate the first Geodesic Mission of the French Academy of Sciences which conducted experiments to test the flattening at the poles of the characteristic shape of the Earth. 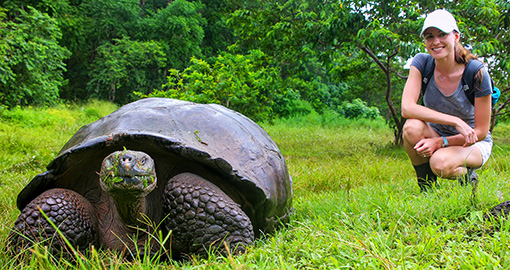 The Galapagos Islands are situated 900 kilometres/560 miles off the coast of Ecuador in the Pacific Ocean. They are known for their large number of endemic animal and bird species which were studied by Charles Darwin. They are a nature lover’s paradise as you can see animals and birds which don’t exist anywhere else such as marine iguanas, flightless cormorants, giant tortoises and Galapagos penguins. It is very easy to come up close to them on Galapagos tours as they are quite indifferent to the presence of humans. The best way to explore the islands is by cruise ship and take shore excursions to various islands, each different in character.

Located an hour's drive out of Quito, the Cotopaxi Volcano is often visible from the city. It is located in the Cotopaxi National Park and is 5895 metres/19,347 feet above sea level. It is the highest active volcano in the world and also one of the few places in the world where glaciers are found so close to the equator. Its present activity is limited to a few steam fumaroles. Climbing the snow-capped volcano is one of the most popular things to do in Ecuador among adventure-seekers. There is a small museum featuring a collection of stuffed wildlife and a relief map of the volcano at the Cotopaxi Visitor Centre. Also in the park are the ruins of an Inca military fortress used to control the passage of armies and goods to the surrounding areas and a large lagoon. 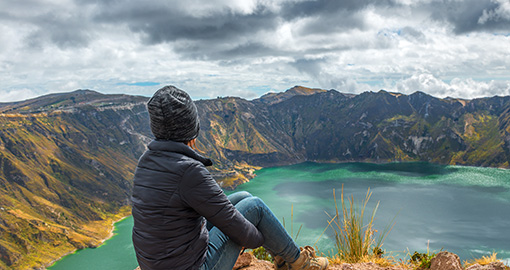 Quilotoa, one of the most beautiful lagoons in South America, is a water-filled caldera and the most western volcano in the Ecuadorian Andes. The 3-kilometre/2 mile wide caldera was formed by an eruption about 600 years ago. The caldera has since accumulated a deep crater lake which has a greenish colour as a result of dissolved minerals. Fumaroles are found on the lake floor and hot springs occur on the volcano. Activities include a four to five-hour hike around the caldera. 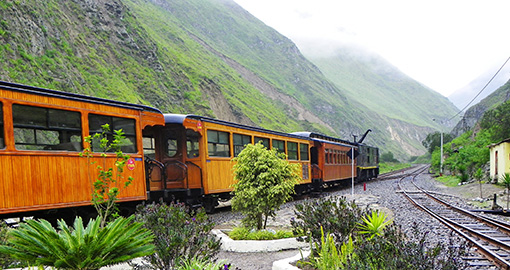 The Devil's Nose has become one of the most popular things to do on an Ecuador vacation. It is a train journey starting at Alausi, one hour from Riobamba and takes around two and a half hours for the return trip to Silambe. The train travels through the Andes Mountains alongside rocky ravines, canyons and cascading streams. The ride takes forty-five minutes to get to Silambe where a light lunch is served after which, it then heads back. The train is driven by a steam engine. The train drops around 500 metres/1,640 feet in altitude over a stretch of just 12 kilometres/7.4 miles. This can be part of a longer rail journey starting in Quito to Guayaquil or vice versa. 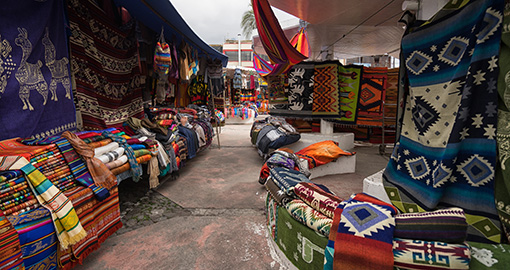 For hundreds of years, Otavalo has been one of the most important indigenous markets in the Andes. It is the largest of its kind in South America offering many different kinds of arts and crafts from local communities. You can see vendors hawking a dizzying array of handmade traditional crafts. The market tradition actually stretches back to pre-Incan times. The indigenous people from the surrounding villages still wear traditional clothing. Otavalenos, as they are known, are the most commercially successful native people in the country. Located about an hour's drive from Quito, this market takes place on Sundays when locals come to town from nearly every village in the area to trade goods such as fruits and vegetables and farm animals like goats and llamas. In the centre of town is a tourist market which is open every day of the week. Articles of interest could be paintings, carvings, hand-painted bowls and spoons, jewellery, sweaters, blankets and purses Otavalo is easily reached from Quito for a day’s outing but it is much more worthwhile to spend at least a night here. 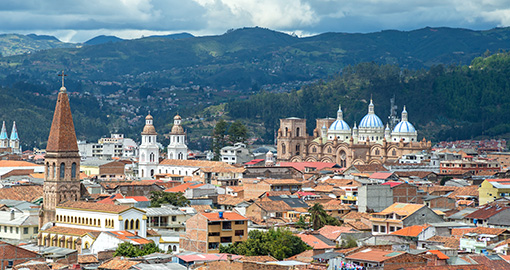 Cuenca has been called the most European city in Ecuador due to its 16th and 17th Century Spanish colonial architecture resembling cities and architecture in Spain. The centre of the city is listed as a UNESCO World Heritage Site due to the number of historical buildings. Some of the main sites to see on Ecuador tours are the Old Cathedral originally built in 1557 but replaced in 1880 (the original is still there but is now a museum) and the New Cathedral completed in 1975, a combination of architectural styles (so large it c could hold up to 9000 people). The city is known for its many craft traditions which include ceramics, metalwork and the internationally famous Panama hat. 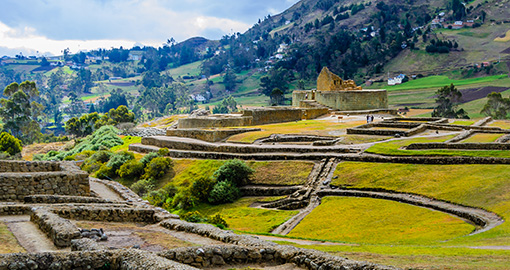 These are the largest known Inca ruins in Ecuador. Ingapirca means “Inca stone wall”. The sight of the Inca Empire’s only remaining sun temple standing on a hill with panoramic views over the surrounding countryside is very impressive. This important building, the Temple of the Sun, is an elliptically-shaped building constructed around a large rock. It is constructed without mortar as are most of the structures here. It was positioned in keeping with the Incas’ beliefs and knowledge of the cosmos. As sun and moon worshipers, they wanted to be as close to their gods as possible so they built their monuments high in the mountains. Another building is the castle complex used as a fortress. Ingapirca was ransacked and much of the stonework was taken by the Spanish to build churches in Cuenca and other places. Just outside the complex is a small museum which houses a collection of Inca ceramics, sculptures, tools, traditional dress and a skeleton found at the site. 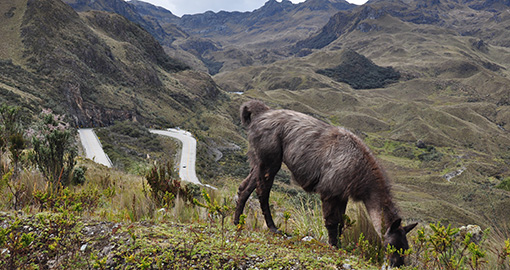 El Cajas National Park is about 30 kilometres/18 miles from Cuenca. The highest point is 4450 metres/14,460 feet. It contains 270 lakes and lagoons. There is interesting flora with a number of plants unique to this park. There is also a large variety of animals, some of which are endemic or endangered. You will find here the South American condor and the largest hummingbird in the world. Hiking routes across the park range from short ones of an hour or two treks that could take up to two or three days.