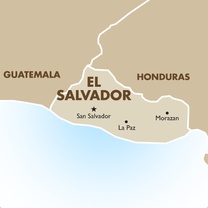 El Salvador, the smallest country in Central America is bordered in the north and west by Guatemala, by Honduras to the north and the east and by the Pacific Ocean in the south and to the west. The geography of El Salvador can be divided into two regions, the first region includes the mountain ranges and the central plateaus while the second region is made up of the coastal plains, commonly known as the Pacific lowlands.

Two parallel mountain ranges cross through the country to the west. The northern range is the Sierra Madre which runs along the border of Honduras. At 2,730 m (8,957 ft), Cerro El Pital is the highest point in the country. El Salvador’s southern range is made up of more than twenty volcanoes, with Santa Ana at 2,365 m (7,759 ft) being the highest volcano in the country. The central plateau between the two ranges accounts for only 25% of El Salvador’s land, yet it hosts the country’s largest cities as well as the heaviest concentrations of population.

El Salvador is home to more than 300 rivers that cross the nation. The Rio Lempa is the only navigable river and is the most important in the country. There are also numerous lakes, many of which are found in the interior highlands and are of volcanic origin.

At Goway we believe that a well-informed traveller is a safer traveller. With this in mind, we have compiled an easy-to-navigate travel information section dedicated to El Salvador.

Learn about the history and culture of El Salvador, the must-try food and drink, and what to pack in your suitcase. Read about El Salvador's nature and wildlife, weather and geography, along with 'Country Quickfacts' compiled by our travel experts. Our globetrotting tips, as well as our visa and health information, will help ensure you're properly prepared for a safe and enjoyable trip. The only way you could possibly learn more is by embarking on your journey and discovering El Salvador for yourself. Start exploring… book one of our El Salvador tours today!

LATIN AMERICA by Goway is an exclusive division that specializes in planning and organizing El Salvador tours and experiences. Choose from one of our independent stopover modules and more, We want to be your first choice when next you go globetrotting to El Salvador.