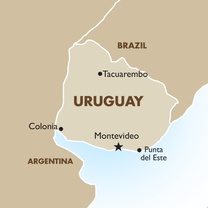 Located in southern South America, Uruguay is bordered by Argentina in the west, by Brazil in the north and northeast and the Atlantic Ocean in the southeast. Uruguay is a relatively small country that is made up mostly of plains and low hills.

Uruguay’s coastal plain on the Atlantic Ocean is broken by shallow lagoons as well as a string of beaches. The beaches found in Uruguay are often considered some of the best in South America and each provides its own unique identity. Montevideo, the country’s capital city and chief port, is also the southern point in the nation. It hosts nearly half of Uruguay’s population.

The majority of Uruguay consists of rolling plains on its eastern, southern and western edges.  These plains can be seen as a transition from the Argentine lowlands to the hilly uplands of Brazil. Located in the hill range of Sierra Carapé, the highest point in the country is Cerro Catedral at 513 m (1,683 ft). There are many lakes and lagoons found in Uruguay and there are also three major river systems, the Río Uruguay, the Yí River and the Río Negro. The Río Negro is the longest and most important river in Uruguay and travels the entire country from northeast to west.

At Goway we believe that a well-informed traveller is a safer traveller. With this in mind, we have compiled an easy-to-navigate travel information section dedicated to Uruguay.

Learn about the history and culture of Uruguay, the must-try food and drink, and what to pack in your suitcase. Read about Uruguay's nature and wildlife, weather and geography, along with 'Country Quickfacts' compiled by our travel experts. Our globetrotting tips, as well as our visa and health information, will help ensure you're properly prepared for a safe and enjoyable trip. The only way you could possibly learn more is by embarking on your journey and discovering Uruguay for yourself. Start exploring… book one of our Uruguay vacations today!

Book your Uruguay tour with Goway!

LATIN AMERICA by Goway is an exclusive division that specializes in planning and organizing Uruguay vacations and experiences. Choose from a simple city stopover, an independent travel module, a Holiday of a Lifetime and much more. We want to be your first choice when next you go globetrotting to Uruguay.