Things to do in Croatia

Every country has its outstanding and special attractions. Goway has selected its Top 13 Things to Do in Croatia (not in any particular order) for you to enjoy on your visit to this destination. 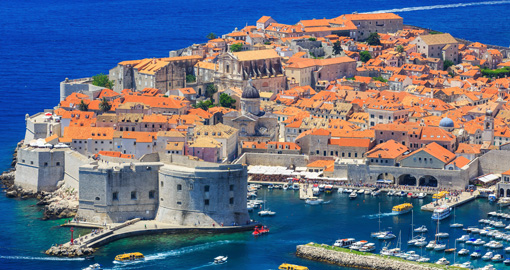 Dubrovnik is known as the pearl of the Adriatic and one highlight on your Croatia vacation has to be a walk on the elevated medieval city wall which totally surrounds the old part of the city. The wall was originally built in the middle ages to resist invaders. It is one way to not only really see what the old city has to offer. Within its walls, you will find beautiful churches, monasteries and museums. You will also view the beautiful coastline of Dubrovnik. The distance around the wall is 2 kilometres/1.2 miles and the views will amaze you. 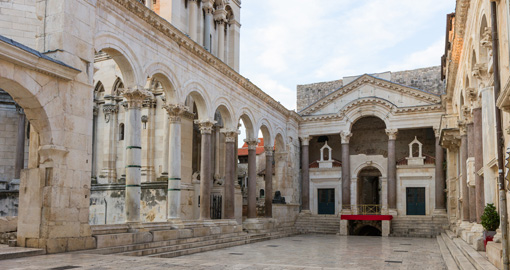 The Diocletian’s Palace is one of the best-preserved Roman architectural sites in the world. It was built originally as a combination of a luxury villa and summer home for the Roman Emperor Diocletian who lived in the 3rd Century and a military camp. It is a breathtaking city within a city divided into 4 parts with 2 main streets. This complex has become the old town of Split and contains numerous shops, cafes, restaurants and also apartments. The centre of activity is the main square called the Peristyle. Not much is left from the era of Diocletian except the palace and the walls and gates. In the evening, the palace is particularly attractive as the palace and its surrounds are illuminated. For fans of the TV series, “Game of Thrones”, this was where a number of scenes were shot. 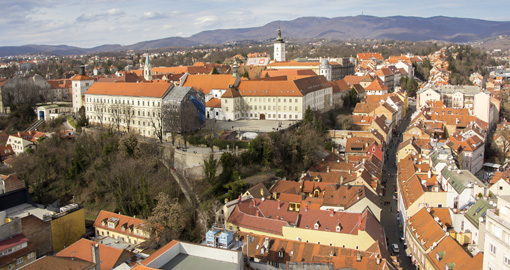 If you visit Zagreb on your Croatia vacation, the Upper Town is the old historic area of Zagreb and resides on a hill overlooking the newer parts of the city. It consists of cobblestone streets, attractive medieval squares, red-tiled roofs of its buildings and a number of pleasant cafes and restaurants. At one end is the Strossmayer Promenade where the old city walls once stood and from where you can look over the rooftops of Zagreb. The best-known landmark in the Upper Town is the Gothic-style Cathedral of the Assumption. The Lotrscak Tower dates back to the 13th Century when canons are fired daily. There are several museums located here to while away your time and add to your enjoyment. 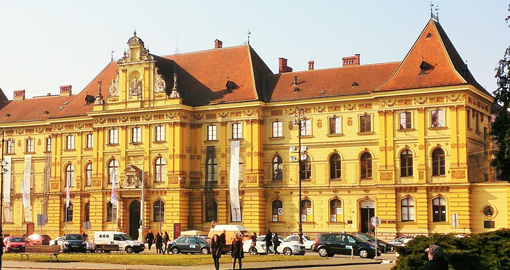 If you only visit one museum in Zagreb, then it has to be this one. It is totally unique. Situated in the Upper Town, it is dedicated to romantic liaisons that have failed, exhibited through letters, memorabilia and photographs, all submitted from jilted lovers around the world. Some of the exhibits are influenced by emotional upsets and others are whimsical in the case of a more philosophically-inclined, jilted person. Definitely, a fun museum not to be missed. 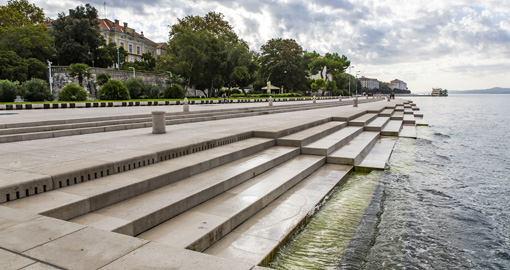 The Sea Organ is a series of stairs below which are a set of organ pipes which play music. The sound is created by the air pushed up by the sea, described by someone as “an endless concert of mystic harmonies by the "Orchestra of Nature". The engineering is very clever as the water below the surface allows air to flow into the sea organ. This results in chime-like notes being produced and because the sea is forever moving, the sea organ never sounds exactly the same twice. Each sound you hear is completely different. There are 35 pipes of different lengths and diameters. 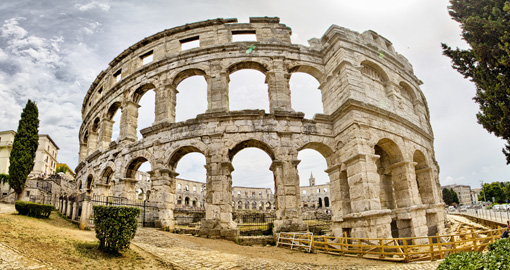 Pula is best known for its many surviving ancient Roman buildings. The most famous is its magnificent 1st Century AD Amphitheatre which overlooks the harbour. It is one of the six largest surviving Roman arenas in the world and also one of the best preserved. From time to time, with a 20,000 seating capacity, gladiator shows are held with mock fights. The city's old quarter of narrow streets is lined with medieval and Renaissance buildings. The Roman Forum, constructed in the 1st Century BC, is the main square in the centre of the city and contains the City Hall, built in the 10th Century. There are numerous other ancient sites such as the Temple of Roma and Augustus, the Twin Gates, one of the few remaining gates after the city walls were pulled down at the beginning of the 19th Century and the Gate of Hercules dating back to the 1st Century AD. 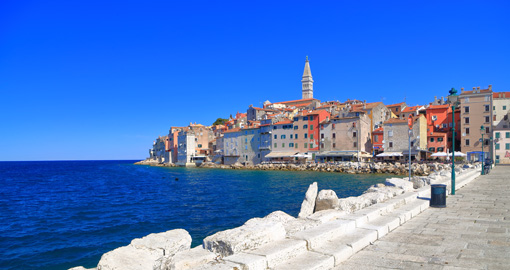 Rovinj is one of the most beautiful towns you will encounter on a Croatia vacation. It is located on a peninsula with high cliffs with coastal islands on which are to be found beaches and hotels. Rocky headlands and coves with sand and pebble beaches spread along the coastline. The old town, surrounded by wooded hills, has a number of interesting sights with its steep cobbled streets and lovely piazzas with a wide selection of bars, shops and restaurants. There is a street called Grisia, known as Rovinj’s Montmartre due to its many art galleries to be found here. 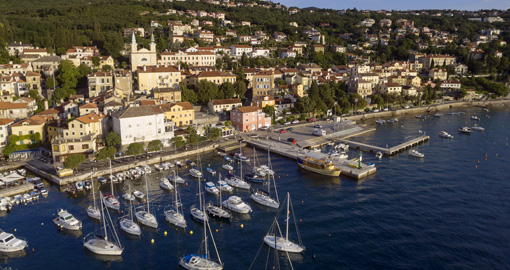 Opatija was once a chic resort where nobility and the aristocracy came to relax. One of their legacies is the Belle-Epoque villas found here. The illuminated 12-kilometre/7 mile-long coastal promenade known as the "Lungomare" has well-kept beaches and provides a stunning backdrop for the villas. An example is the Villa Angiolina, built in 1844, a major landmark and a remarkable 19th Century building surrounded by a park. Opatija is a vibrant resort that hosts many cultural and entertainment events. 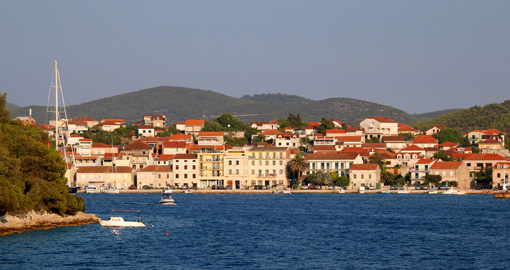 Korcula is an island generally reached by ferry from Split and has some of the best beaches in Croatia, some rocky and some sandy. Historical, fortified Korcula Town is known as “Little Dubrovnik” with its medieval squares, churches and palaces. Many traditional activities take place at Korcula including traditional folk music and dancing. 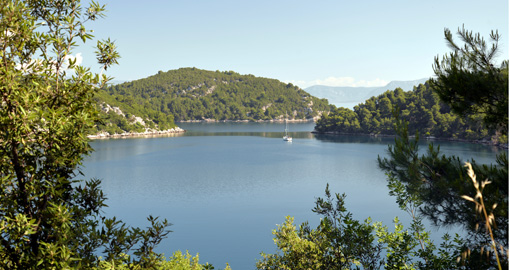 The Enchanting Island of Mljet

Mljet is reached by ferry from Dubrovnik. It has been described as an unspoiled oasis of tranquility with its lush landscapes and pine forests. The island is considered to be one of the most beautiful of all Croatian islands. It is Croatia's greenest island with a clear and clean blue sea and sandy shoreline. It is rich in underwater marine life and therefore an excellent place for scuba diving enhanced by the crystal-clear water. One major attraction on the island is the Mljet National Park which is very scenic with its two attractive saltwater lakes. The park is pretty well unspoiled. 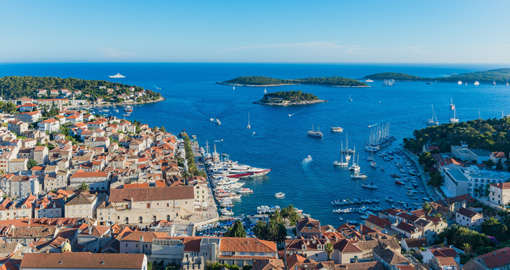 The Party Island of Hvar

Hvar has earned the reputation as the country’s premier party town if this is your style on your Croatia vacation. During the tourist season, the port is filled with large sailboats and the all-night discotheques attract young visitors. But that’s not all that is attractive about Hvar. Its hillsides are covered with pine forests, vineyards, olive groves, fruit orchards and lavender fields. Hvar is often called “The Island of Lavender”. Hvar Town is surrounded by 13th Century walls inside of which are several beautiful Gothic palaces and pedestrian streets. Hvar is also one of the two most famous winemaking regions in Croatia, famous for both red and white wines. 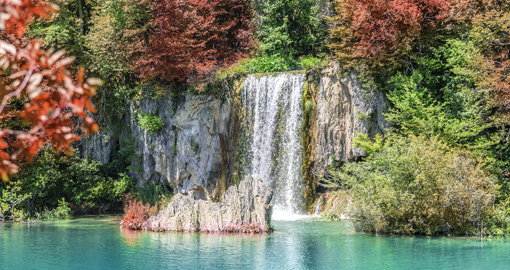 Although not on the coast, a deviation from this natural inland wonderland would be rewarding. It is a 2-hour bus ride from Zagreb or Zadar. Within the boundaries of this heavily forested national park, which is a UNESCO World Heritage Site, there are 16 terraced lakes which literally tumble into one another via a series of waterfalls and cascades. The lakes are renowned for their distinctive colours, ranging from azure to green, grey and blue. 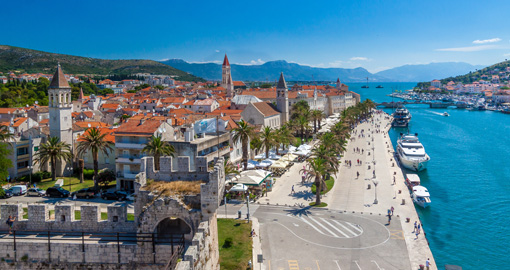 Not far from Split is the beautiful medieval town of Trogir, designated a UNESCO World Heritage site and home to a number of fascinating historical sites. Its history goes back to a Greek settlement in the 3rd century BC. The town has many influences due to the different occupations – Roman, Hungarian and Venetian. Trogir is charming with its narrow cobbled streets, limestone buildings and wide seafront promenade. The entire town is a historical monument with a considerable number of churches, fortification towers and palaces. The Cathedral of St Lawrence dates back to the 13th Century and its tower can be climbed for amazing views of the city and its surrounds.

At Goway we believe that a well-informed traveller is a safer traveller. With this in mind, we have compiled an easy-to-navigate travel information section dedicated to Croatia.

Learn about the history and culture of Croatia, the must-try food and drink, and what to pack in your suitcase. Read about Croatia's nature and wildlife, weather and geography, along with 'Country Quickfacts' compiled by our travel experts. Our globetrotting tips, as well as our visa and health information, will help ensure you're properly prepared for a safe and enjoyable trip. The only way you could possibly learn more is by embarking on your journey and discovering Croatia for yourself. Start exploring… book one of our Croatia tours today!