Things to Do in Prague

Like a twisted fairy tale, with winding, medieval streets, spires that reach high into the sky, and an unabashed appetite for the oddball and bizarre, Prague holds a special place among Europe’s cities. Though its popularity can result in unfortunate crowding, there’s no denying the spell a walk among the spires can cast on a first-time – or repeat – visitor. Untouched by World War 2 bombing, the Czech capital retains Bohemian charms even swarm of tourists can’t strip away. Those looking to see the highlights in limited time should check out these top Prague attractions. 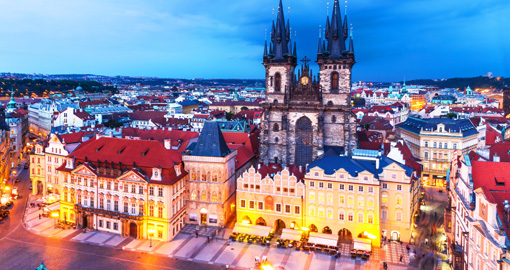 It can feel like all paths through Prague’s labyrinthine old town lead to its central square. Overlooked by the looming towers of the Church of Our Lady Before Tyn and the Old Town Hall, this is the place to get a sense of Prague’s beauty, history, and secrets, all while sitting down with a coffee. Don’t miss a striking of the 14th century Astronomical Clock which decorates the Old Town Hall.

Plenty of tourists will make the long climb up through the Castle Quarter, but there’s a lot to see, so save some energy by taking the tram and work your way down from the top instead. Start with looming, yet intricate St Vitus Cathedral, with its Alfons Mucha stained-glass window, then wander down through the Golden Lane, the Old Royal Palace and St George Basilica, ending with a roam through the art of the privately owned Lobkowicz Palace. 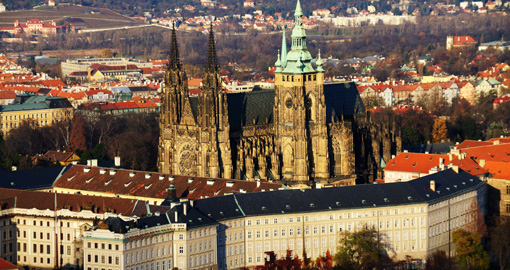 There’s a good chance you’ll cross the atmospheric Charles Bridge a few times while in Prague. Each can be a wildly different experience, depending on the time of day. On a fine day (or night) in high season, you’ll be battling with crowds, touts, selfie-snappers, artists (and ‘artists’), and more, so try to return in the early morning or late evening to enjoy the statues and evocative views of Prague and the Vltava River. 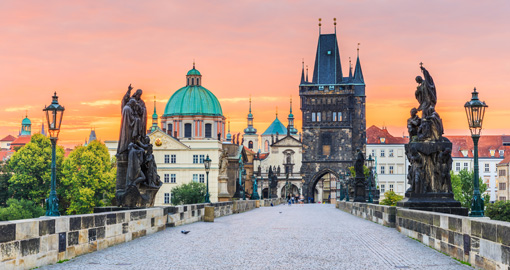 The history of Czechia’s Jews is heartbreaking, but essential to understanding Prague’s story. Each of the major sites in the Jewish Quarter is worth visiting, particularly the Old Jewish Cemetery, and the Spanish Synagogue, which uniquely embraces Moorish design elements (and has an appropriately odd monument to Franz Kafka right outside). 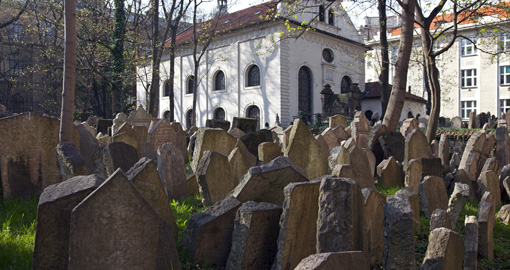 Plenty of visitors come to Prague for the medieval charm, but Wenceslas Square is the heart of the modern city. It’s witnessed most of the watershed moments of Prague’s 20th century, including Nazi demonstrations, the Prague Uprising, the anti-Communist protests of 1968, and the Velvet Revolution that ended Communist rule. Focus your visit around the top of the Square, where the National Museum overlooks it all, along with the statue of St Wenceslas himself. 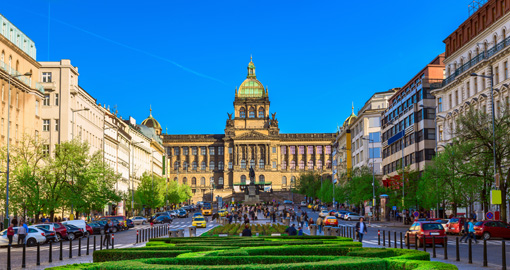 Side by side, two of Prague’s most striking buildings couldn’t seem more different. The gothic Powder Gate was one of the original city gates to the Old Town of Prague, and still marks the border today. Its looming tower rises atop an intricate façade, heavily inspired by the equally intricate Charles Bridge. Next door, colourful Municipal House contains Prague’s celebrated Smetana Hall, an Art Nouveau concert venue decorated by renowned artists including Mucha. A performance here is as much a feast for the eyes as it is for the ears. 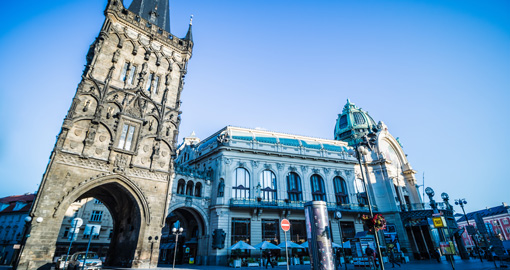 A green lung overlooking Prague with an historic funicular railway, and great views from the top of its loving tribute to the Eiffel Tower. Petrin Hill is a great spot to unwind from your explorations and escape the crowds for a couple of hours. Roam the rose garden, get lost in the mirror maze, see the medieval Hunger Wall, or visit the so-called Kingdom of Argondia, an eccentric, but impressive fantasy art project housed in an old mill building. The funicular links the hill to the ‘Lesser Town,’ which is worth wandering on its own. 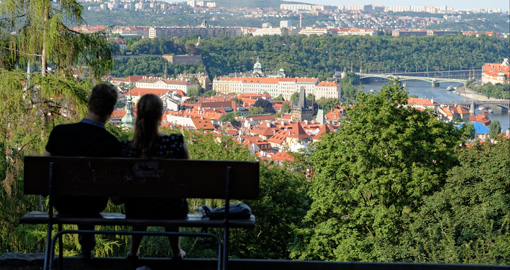 As they do in much of Prague, beauty and oddity mingle seamlessly at Strahov Monastery. Whether it’s the Basilica of the Assumption of the Virgin Mary, the Strahov Gallery, the famous and much photographed Theological Hall, or the Philosophical Hall (the list continues), you’ll see exquisite murals. Be sure to check out the 17th century globes as well, and stop by the Cabinet of Curiosities for some truly oddball ‘treasures’ supposedly from the sea. The Museum of Miniatures is another of Strahov’s strange, but very memorable attractions. 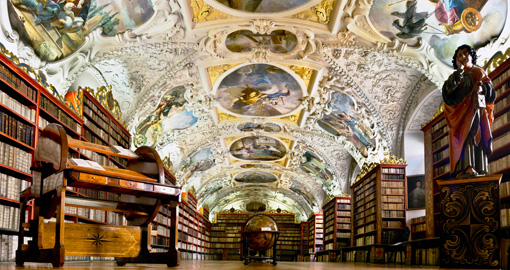 Veletrzni Palac and the National Gallery

A little north of Prague’s other tourist attractions lies the city’s greatest collection of art, old and new. The highlight is Alfons Mucha’s 20-panel Slav Epic, which takes about an hour to appreciate properly on its own. The wider gallery contains a vast collection of work from the 13th century on, both Czech and international, plus visiting temporary exhibitions.

You’d expect the city of the Charles Bridge to appreciate fine sculpture, but Prague is also the city of Franz Kafka, who is immortalized in several odd figures and attractions throughout the city (including the one outside the Spanish Synagogue). Elsewhere in Prague you can find a beggar carrying a skull on his back, an old East German car on legs, Sigmund Freud clinging to life several stories above the ground, a London bus doing push-ups, King Wenceslas riding an upside-down dead horse, and many more. You’ll find these offbeat creations right throughout Prague, though Petrin Hill is a great place to start. 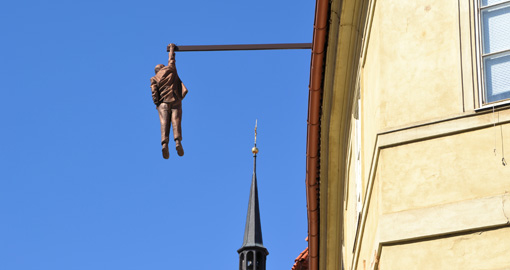 Czechia uses the Czech Koruna, and is famous in North America as a ‘cheap’ destination. Thankfully, the crowds that reputation brought – both for sightseeing and partying – have not pushed prices up to anywhere near western levels, and Prague remains one of Europe’s best travel bargains. Good, cheap meals can be had for around 130Kc, while three courses at mid-range for two will push 600-700Kc. While those who visited Prague in the uber-cheap 90s will get a rude shock when it comes to beer, a local pint will still only cost around 35Kc. Hotel rooms have unfortunately been affected by Prague’s popularity, and rates through the warmer months can seem a little high for such an affordable city. Still, these are rarely outrageous, particularly if you’re willing to get outside the Old Town, where prices are inflated on pretty much everything.

The Czechs are more accepting than some of their capital’s tourist influx, but a little understanding and courtesy will go a long way. Make an attempt at Czech, and don’t expect habitual smiles from strangers, including service people. In general, Czechs are friendly, but not outgoing, and will usually wait for you to approach them unless you are in obvious need of help. Despite their exquisite churches, Czechs today are also among the least religious people in the world, though family is a top priority for most. Prague is an extremely safe city, but be wary of scams, particularly when taking taxis. Foreigners are generally perceived as being quite wealthy, and as with anywhere, there are those who’ll try to take advantage.

Czech is a Slavic language closely related to Polish and (unsurprisingly) Slovak. Most young people speak English, but it is far from ubiquitous. A few attempted Czech phrases may help coax some English in return (or try German, if you speak it). Some Russian may be helpful with older Czechs, particularly in smaller towns.