Things to do in Denmark

Every country has its outstanding and special attractions. Goway has selected its Top 15 Things to Do in Denmark (not in any particular order) for you to enjoy on your visit to this destination. 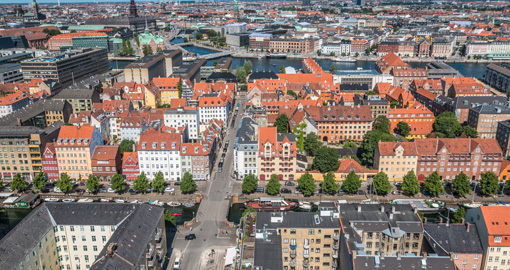 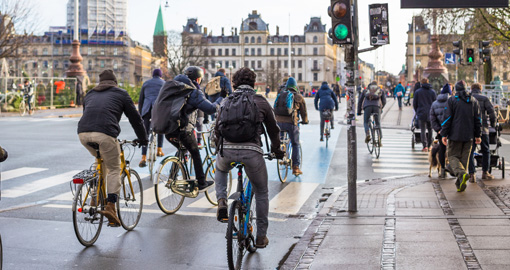 Denmark, like The Netherlands, is a land of bicycles. You will see a large section of residents travelling by bike as much as motorized vehicles. Not only is Denmark flat, but the roads are designed with bikes in mind such as bicycle lanes, and even bicycle bridges. Due to the country’s small size, it is quite easy to get around on Denmark vacations. You can just rent a bike in Copenhagen or any other major city and take in all the sites. Just follow the locals!

This city can keep you very busy but here are a few suggestions which you will enjoy. 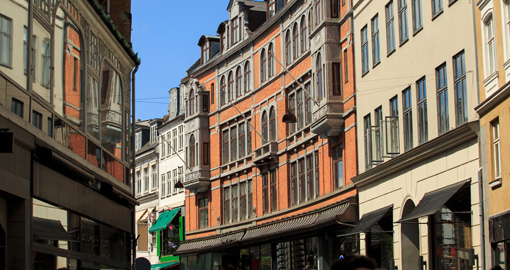 Take a stroll down this major thoroughfare located in the very heart of the city. It is a busy 1.1 kilometre/0.7-mile long pedestrian street in the principal shopping district, offering merchandise from budget-friendly to world-class designer stores. Make sure you head down some of the side streets for not only more stores but quieter neighbourhoods where you can visit local churches, stop for a coffee at one of the cafes or just explore.

The Tivoli Gardens are possibly as well-known as the Little Mermaid on Copenhagen vacations. The best way to describe it is that it is a combination of an amusement park and pleasure garden with over 20 different attractions including a roller coaster, carousels, pantomime, puppet and open-air theatres, plus numerous restaurants and cafes. There are also flower gardens and a Moorish-styled concert hall, illuminated at night. 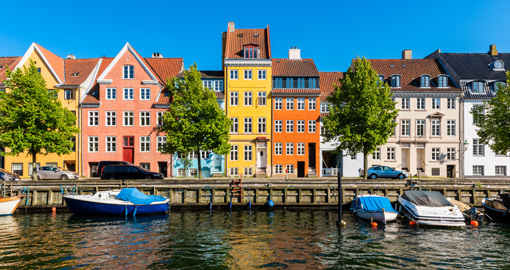 They may not be as plentiful as in Amsterdam but they are an integral part of the city and add greatly to the character of Copenhagen. The best-known canal is Nyhavn, which extends from the harbour into the heart of the city. This very attractive canal is popular not only with visitors on their Denmark vacation but also with locals. You can stroll along Nyhavn and see on one side of the canal, brightly-coloured 17th and 18th Century gabled townhouses. Number 67 Nyhavn is the house where Hans Christian Andersen lived at one time. On the other side are a whole host of cafes, restaurants, and bars. In the summer, it is a very lively place. From Nyhavn, you can take a 1-hour canal cruise. Another starting point for canal cruises is Gammel Strand on the harbour.

The Royal Danish Opera House, a 14-storey building with, unusually, 5 of its floors beneath street level, is located on an island on the opposite side of the harbour from the Amalienborg Palace. This modern edifice is one of the most expensive opera houses ever built. The ceiling in the main auditorium is adorned with 105,000 sheets of 24-carat gold leaf. The orchestra pit is one of the largest in any opera house, with room for 110 musicians. The building provides excellent sound quality for any orchestra. 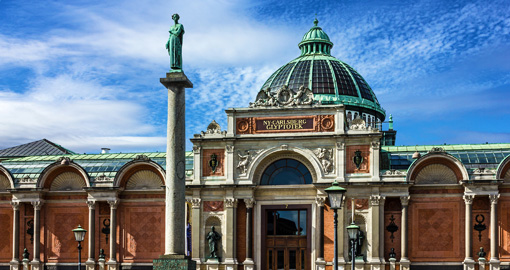 The National Museum of Denmark is a must-visit on your Denmark tour if you are interested in Danish history and culture. It contains exhibitions from the Stone Age, the Viking Age, the Middle Ages, and the Renaissance… up to Modern Danish History. The collections include a sun chariot that is more than 2,000 years old, Romanesque and Gothic church fittings, Danish porcelain and silver, antiquities and coins.

The National Gallery of Denmark offers the largest collection of Danish art from the 1700s to the present day, plus works from around the world, which include artists such as Rubens, Matisse and Munch. In fact, it has one of the world’s best Matisse collections.

The Carlsberg Glyptotek is an art museum built around the personal collection of Carl Jacobsen (1842–1914), the son of the founder of the Carlsberg Breweries. It is mainly a sculpture museum with items from ancient cultures such as the Romans, the Greeks, and the Egyptians. There are also more modern works including some by Rodin. It is also noted for its collection of paintings by French Impressionists as well as by Danish painters. The French Collection includes works by Monet, Pissarro, Renoir, Degas, Cézanne, Van Gogh, Toulouse-Lautrec, and Bonnard. 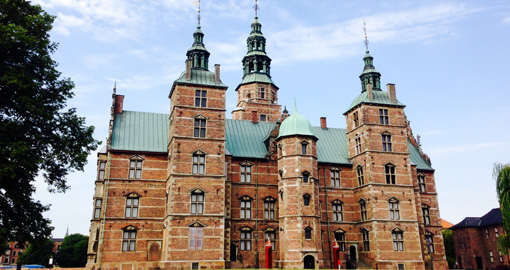 The 800-year-old Christiansborg Palace, on the tiny island of Slotsholmen in the centre of the city, is the Danish seat of government, the office of the Prime Minister and the Supreme Court of Denmark, all rolled into one huge building. It is the only building in the world that houses all three of a country’s branches of government. Parts of the palace are used by the Royal Family for functions and special events. You can visit the Royal Reception Rooms, the Tower Room, and the Oval Throne Room. The imposing Great seats 400 guests and is used for banquets, state dinners, and receptions. It also contains the exquisite Queen’s tapestries which depict 1000 years of Danish history.

Rosenborg Castle is a beautiful historic building dating back to the early 17th century and contains some of Denmark’s greatest royal art treasures and crown jewels. Inside are coronation thrones and tapestries which depict battles between Denmark and Sweden. There is a special collection of fine Venetian glassware plus there are portraits of several members of past royalty. The Rosenborg Castle Garden is the country’s oldest royal garden and is a popular venue for the people of Copenhagen. Next to the castle are barracks where the Royal Life Guards are stationed and guard Rosenborg Castle.

Amalienborg Palace consists of four identical beautiful palaces surrounding an octagonal courtyard and is the official home of the Danish Royal family. The palace is guarded day and night by the Royal Life Guards who march from Rosenborg Castle through the streets to Amalienborg Palace. 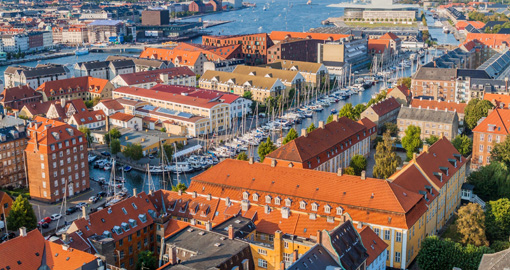 One very unusual and different neighbourhood is Christiana in the district of Christianshavn. Founded in 1971 by squatters and artists as a social experiment, this neighbourhood is an autonomous-free town within Copenhagen. When you enter Christiana, a sign says, “You Are Now Leaving the European Union,” and when exiting, “You are returning back to the EU.” It even has its own flag. Many of its almost 1000 residents are artisans who try to live as organically as possible. It is full of art galleries, restaurants, cafés, and historic buildings and there are entertaining street murals everywhere. One canal has permanent homes with people living on houseboats. 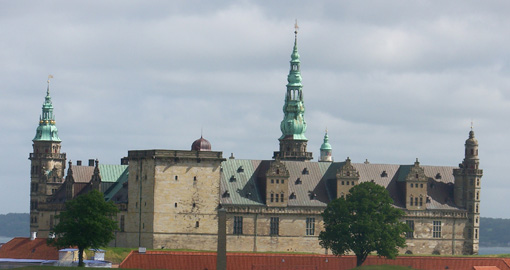 This is the town, 40 minutes by train from Copenhagen, in which you will find Kronborg Castle, the castle that Shakespeare included in his play, Hamlet. It is doubtful that he ever visited this place but it certainly evokes the mood of the play. Towering over a promontory, Kronborg faces the sea. It is surrounded by fortifications with bastions which were once used to protect Denmark from marauders and was home to the royal family until the late 1600 hundreds. A tour of the castle is available through decorated rooms with renaissance and baroque interiors. You can almost imagine Hamlet strolling the corridors and hallways. Every summer you can experience Hamlet being performed on an open-air stage in the courtyard. 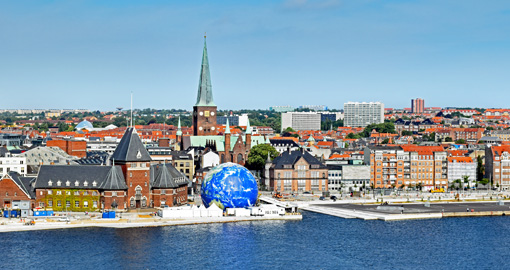 To give the art gallery its full name, the ARoS Aarhus Art Museum is one of the largest museums in Northern Europe and a highly recommended place to visit on Denmark vacations. It has large permanent and temporary exhibitions of both Danish and International artists from Hans Christian Andersen to Andy Warhol. On the roof of the gallery, you can visit the Your Rainbow Panorama, a permanent work of art consisting of a 150-metre/405 feet long and 3-metre/9 feet-wide circular walkway in glass in all the colours of the rainbow. It has 360 degrees views of the city.

In 1949 a carpenter from a small town in began producing the interlocking bricks that we know today as LEGO. From this came the product we know today by the same name. Legoland Park is in Billund in Jutland. There are over 58 million Lego bricks involved in this exhibition. There are moving vehicles made of Lego such as planes, cars, trains and ships. There are also rides, water parks and 3D movies. 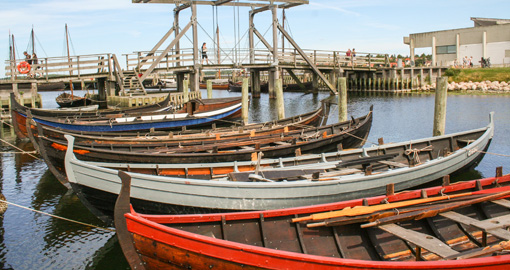 Just outside of Copenhagen in Roskilde, you can experience how life was during the Viking era, approximately 1000 years ago. There are 5 original Viking ships which have survived and were discovered at the bottom of the Roskilde Fjord. Interesting displays about the Viking Age put the boats into a historical context and the cinema shows a 14-minute about the 1962 excavation. From the museum’s own harbour, you can cruise around the beautiful fjord and admire the museum’s large collection of traditional Nordic boats.