Things to Do in Berlin 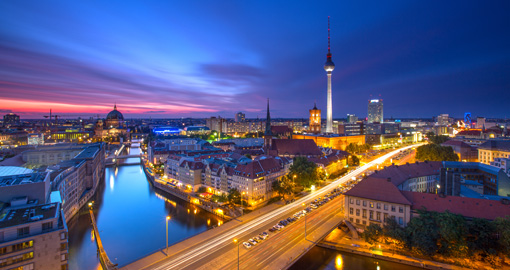 Thriving, then devastated. Divided for half a century, but now thriving again. ‘Poor but sexy’ Berlin has emerged from its turbulent 20th century with more than a few scars, yet its allure is more potent than ever. Berlin is attracting newcomers like no other city on Earth these days, and no German vacation is complete without a visit to the capital. While not all the popular images and stereotypes are true, this huge, historic city has plenty to keep travellers exploring.

Dating back to 1791, Brandenburg Gate has since become a symbol not only of Berlin’s identity but its resilience. Desecrated by Napoleon, heavily damaged in World War 2, and isolated just on the eastern side of the Berlin Wall – where East Berliners were forbidden from approaching it – the Gate is Berlin’s ultimate architectural survivor. 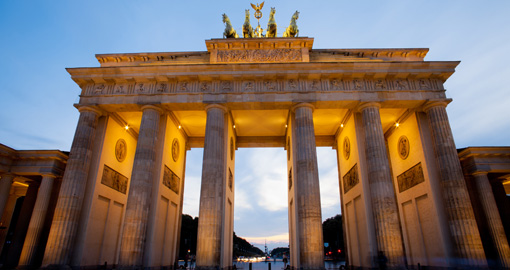 Close behind the Brandenburg Gate is its neighbour, the Reichstag. After the relentless bombing, and decades of neglect, Germany’s parliament building now stands restored and capped with its unmistakable glass dome. Spiral walkways to the top offer superb views over Berlin, and down onto the floor of the Bundestag below, to keep Germany’s leaders visible and accountable at all times. While some entry is free, it must be pre-booked via the official website. Do this about a week ahead to be on the safe side. 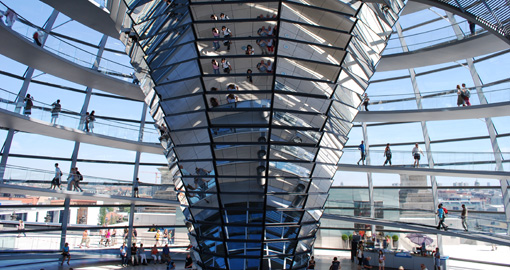 Memorial to the Murdered Jews of Europe

This haunting grid of monoliths needs no introduction. Its uneven ground and seemingly endless stone blocks create a disorienting sense of claustrophobia and confusion that makes the point extremely clear. The free museum below, accessed via the southeast corner, fills in the sobering details. The solitary stone structure on the other side of Ebertstrasse is a memorial to homosexuals persecuted under Nazism. 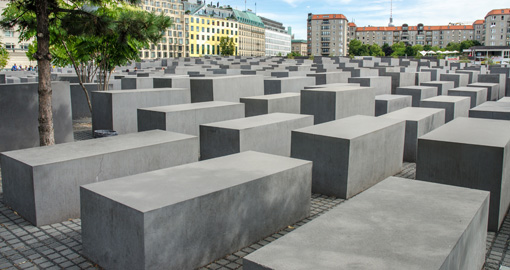 It’s not until after the fact that you’ll start to wonder how the awe-inspiring Ishtar Gate wound up in Germany. Nor the Market Gate of Miletus. Nor Jordan’s Mshatta Façade. But the instant wow factor – that initial moment where your jaw unhinges and you can’t quite believe what you’re seeing – is what puts the Pergamon up there with the Louvre or British Museum on the list of ‘must-visit museums in Europe. Sadly, the namesake Pergamon Altar is under renovation, with 2023 the last quoted reopening date. Located on Museum Island. 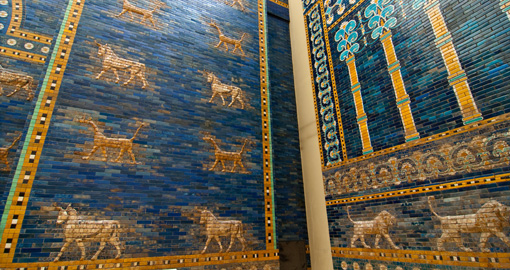 Museum in the Kulturbrauerei and the Berlin Wall Memorial

From touristy Checkpoint Charlie to the kitchy but fun GDR Museum, there are museums throughout Berlin devoted to telling the story of the East under Communist rule. This one, a stone’s throw from Eberswalder Strasse U-Bahn in the city’s north, is arguably the best. It’s free and is within an easy walk of the Berlin Wall Memorial on Bernauer Strasse. Visit this as well if you’re craving more insight into the city’s tragic division, and daring tales of escape. 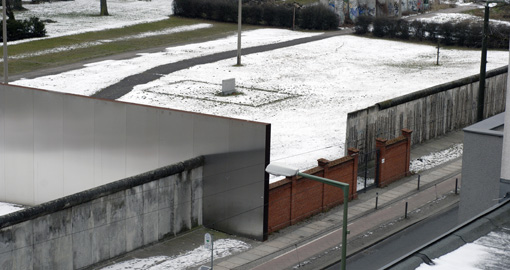 Berlin’s favourite summertime playground, the Tiergarten is a vast green oasis that wraps around the Victory Column on the edge of Mitte. Whether you’re rolling out a blanket on the grass, biking along the many weaving paths, or upending a Berliner Kindl in the beer garden, this is a great respite from the city sprawl. Zoo Berlin and the famed Kurfurstendamm shopping strip are both within easy reach when it’s time to move on. 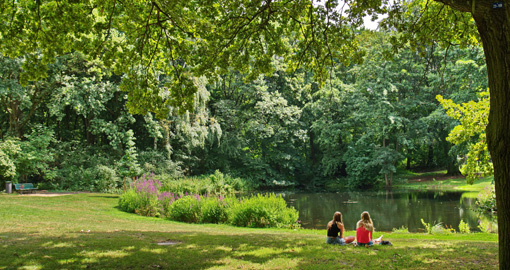 The Topography of Terror

Built on the ground that once housed the SS headquarters, this free museum is about as cheery as it sounds. Still, it’s an essential stop for anyone interested in the Nazis’ insidious rise to power, and the years beyond. If you’re pushed for time, focus on the exhibition trench, which lays things out under the shadow of a Berlin Wall remnant. 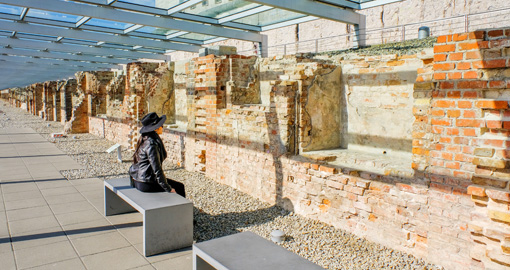 There are Jewish museums all over Europe, but Berlin’s is one of the best museums in town. Of course, it covers the Holocaust with great detail, honesty, and sensitivity. But it also tells the story of the role Jews have played throughout Germany’s history. Balancing its memorial aspects with a showcase of Jewish contributions and achievements, the museum is packed with interesting artefacts, all in a striking building designed by Daniel Libeskind. 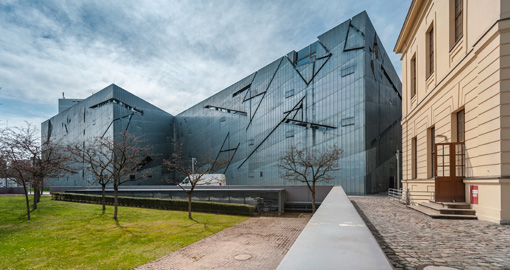 One of the best collections of Egyptian art and artefacts in the world, the Neues Museum lay closed, damaged, and neglected for 70 years before finally reopening in 2009. Today, the museum’s famed bust of Queen Nefertiti is the centrepiece, inviting guests to admire the riches of her former empire, along with prehistoric and early historic collections. 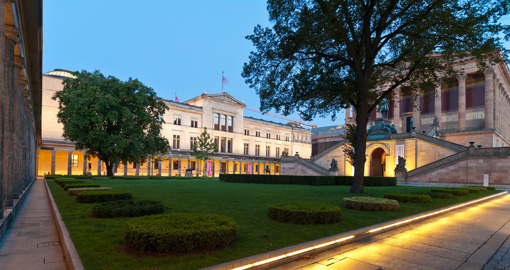 No visit to Berlin is complete without a walk along the East Side Gallery, where the madness of division has been turned into art. You’ll find the most famous images of the wall here, including the much-photographed God Help Me Stay Alive Among This Deadly Love. 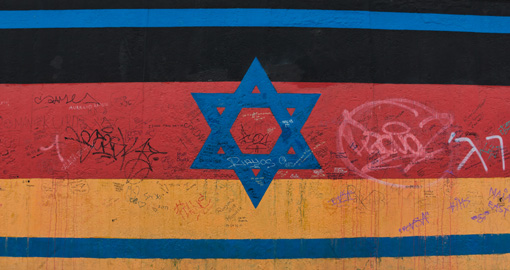 Germany uses the Euro and is very much a cash society that tends to resent debt. Hotels, attractions, and eateries in tourist areas will accept credit cards, but many local supermarkets, restaurants and shops will not. An inexpensive, filling meal will set you back about 8 EUR, while a 3-course, mid-range dinner for two can be had for 40 EUR. You’ll pay around 3-4 EUR for a local beer. Attractions detailing WW2 or GDR history tend to be free, while most large museums charge 8-12 EUR. Because Berlin is huge, decentralized, and very well connected, you can find good quality, affordable rooms just about anywhere in town. The public transit (BVG) is excellent, but single rides are very expensive, so invest in a transit pass for the duration of your stay if you’re going independent.

In general, privacy and personal space are valued and respected in Germany, as are local laws. That includes little ones like jaywalking. If Berlin seems to be a city where ‘anything goes,’ it’s because the whole city operates on an unspoken commitment to obeying the rules. For example, public transit works on an honour system, but if you’re caught riding without a ticket, you will be fined, and there are no exceptions made for unwary tourists. Remember to validate your ticket before riding. An un-validated ticket (without a date stamp) is seen as no ticket at all.

When it comes to Berlin’s more tragic history, the locals will usually be happy to answer respectful questions, particularly in reference to the sights you’re seeing. Just understand that this history doesn’t represent how Berliners see themselves today. Obviously, jokes about the Nazi or Communist regimes should be avoided (even if you hear Germans making them), and any endorsement of Nazi ideology – even a joking Hitler salute – will land you in serious trouble.

Finally, refrain from pointing out how ‘cheap’ everything is in Berlin. The city is nowhere near as cheap as it was twenty, fifteen, or even ten years ago. The locals are all too aware of this, and many miss the days before their city’s newfound popularity started driving up prices.

Berlin commits to all four seasons without suffering particularly brutal summers or winters, which average a peak of 25’C/77’F and a low of -2’c/29F respectively. You can expect snow from December, but the city is comfortable to explore most months of the year. Its inland location and urban microclimate shield it somewhat from Northern Europe’s notoriously changeable weather.

You’ll probably find more English speakers in Berlin than in any other German city. But don’t assume everyone speaks English, particularly in the former east, or in local stores. While you’re unlikely to need any German during your visit, you’ll find the basics tremendously helpful, and they really aren’t so hard to learn. Your high school German will probably do just fine, and mistakes will be received with good humour.