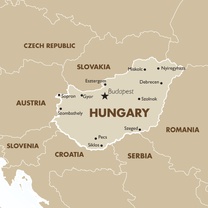 Hungary is a landlocked country which became a republic in 1989 after the Soviet Union disbanded. More than half of the country is flat. The highest parts are in the Carpathian Mountains bordering Slovenia. Hungary boasts the largest lake in Central Europe, Lake Balaton. The principal waterway is the renowned River Danube which flows through the capital, Budapest.

Thermal waters abound in Hungary with over 1000 thermal springs in the country (more than 100 just in the Budapest area) many of which have been turned into baths and spas. There are hundreds of individual baths all around the country. The first thermal baths were erected by the Romans more than 2000 years ago.

At Goway we believe that a well-informed traveller is a safer traveller. With this in mind, we have compiled an easy to navigate travel information section dedicated to Hungary.

Learn about the history and culture of Hungary, the must-try food and drink, and what to pack in your suitcase. Read about Hungary's nature and wildlife, weather and geography, along with 'Country Quickfacts' compiled by our travel experts. Our globetrotting tips, as well as our visa and health information will help ensure you're properly prepared for a safe and enjoyable trip. The only way you could possibly learn more is by embarking on your journey and discovering Hungary for yourself. Start exploring… book one of our Hungary tours today!