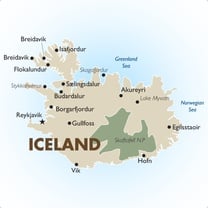 An island nation situated where the North Atlantic and Arctic Oceans meet, Iceland is east of Greenland and directly below the Arctic Circle. Covering 103,000 square kilometres (40,000 square miles), it is the second-largest island in Europe. It has the distinction of being one of the most volcanically active countries in the world and one of the world’s most sparsely populated countries. Iceland’s central highlands are completely uninhabited with most of the population choosing to live on the coast, with more than half in or around Reykjavík, the capital.

Iceland is one of the youngest land masses in the world. It is a volcanic hotspot because it is situated where the European and American tectonic plates meet. Iceland’s central plateau hosts over a hundred volcanoes, but they have not erupted in the past thousand years. There are around 30-40 active volcanoes in Iceland, which have erupted at some point within the last few centuries.

At Goway we believe that a well-informed traveller is a safer traveller. With this in mind, we have compiled an easy-to-navigate travel information section dedicated to Iceland.

Learn about the history and culture of Iceland, the must-try food and drink, and what to pack in your suitcase. Read about Iceland's nature and wildlife, weather and geography, and 'Country Quickfacts' compiled by our travel experts. Our globetrotting tips, as well as our visa and health information, will help ensure you're properly prepared for a safe and enjoyable trip. The only way you could possibly learn more is by embarking on your journey and discovering Iceland for yourself. Start exploring… book one of our Iceland tours today!

UK & Europe by Goway is the exclusive division of Goway that specializes in planning and organizing Iceland tours and experiences. Choose from a simple city stopover, self-drive tours, motorcoach tours, independent travel modules and much more. We want to be your first choice when next you go globetrotting to Iceland.