Things to do in Italy

Every country has its outstanding and special attractions. Here are our top picks for finding your own la dolce vita on a trip to Italy. 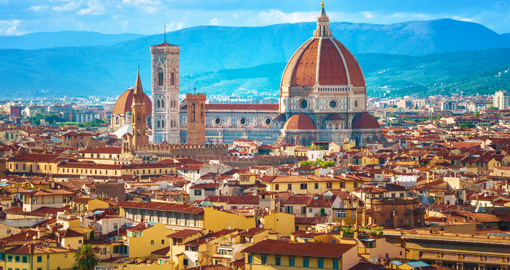 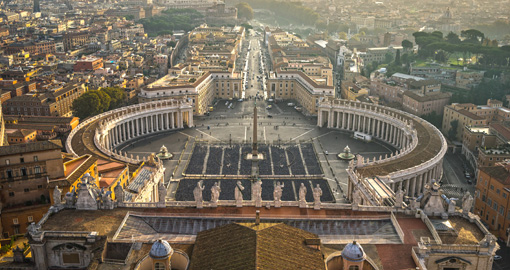 Vatican City has been an independent state since 1929 with its own flag, coins, and stamps. The imposing St. Peter’s Square is where the current pope gives his addresses from a balcony overlooking it. St Peter’s Basilica is the site where Peter, the disciple was martyred. The interior is vast and contains a large number of priceless works of art. It is 190 metres/620 feet in width and can hold 20,000 people. The grottos house the tombs of various kings, queens, and popes including Peter’s Tomb built in his memory. Also in Vatican City is the renowned Sistine Chapel with its wonderful frescoes on the walls and the ceiling including works by Michelangelo (The Creation of Adam). The Vatican Museums make up one of the most important museum complexes in the world, housing masterpieces from the Egyptian Age to the late Renaissance period.

The Colosseum and the Roman Forum 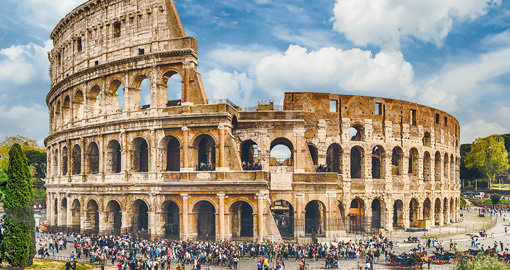 Although no longer in its original condition, the Roman Colosseum has stood the test of time and is a symbol of Rome to behold. This was the arena where gladiator games took place and which held space for 50,000 spectators. You can take an underground tour beneath the arena to explore a network of passages. Today, the Colosseum is inhabited by a number of stray cats who make their home here. Close by is the ancient Roman Forum which was used for celebrations, funerals, and other events. It was only excavated in the early 1900s. Climb to the top of nearby Palatine Hill for panoramic views of the city. 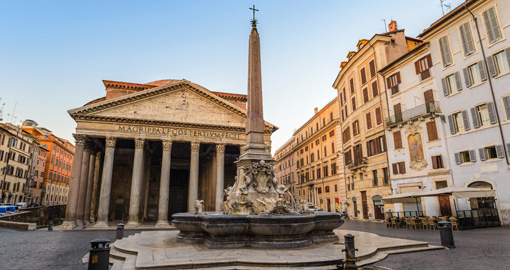 The Roman Pantheon is the best-preserved building of ancient Rome. It was a temple which was dedicated to all the gods of pagan Rome and built between 118 and 125 AD. It is a circular temple made of concrete with a Greek-style facade and a lovely dome rising above its walls. The most striking feature of the building is the 27-foot circular hole within the dome. An altar was later added for Christian worship after the country abandoned its pagan gods. After the Renaissance period, (1300-1700 AD), the Pantheon became a designated tomb for some of the city's artists and elite including the painter Raphael and former kings of Italy. 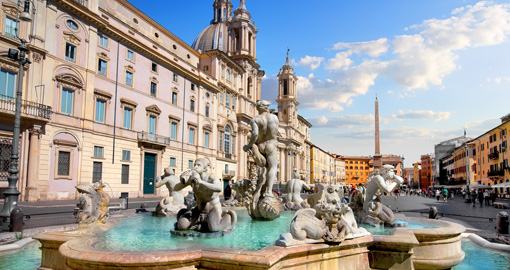 Rome has many beautiful and charming squares but one that should not be missed on a trip to Italy is the most beautiful of all, Piazza Navona. It contains three fountains of which the most remarkable is Bernini's with each of the four statues representing a river from a different continent. There are pleasant cafes and restaurants dotted around the square to sit at and absorb the ambiance. You can have your portrait painted by one of the street artists at work. From the Piazza Navona, you will find yourself in a maze of charming and narrow streets full of restaurants, more cafes, and small, for the most part, quality shops selling everything including clothes, shoes, pastries, and souvenirs. 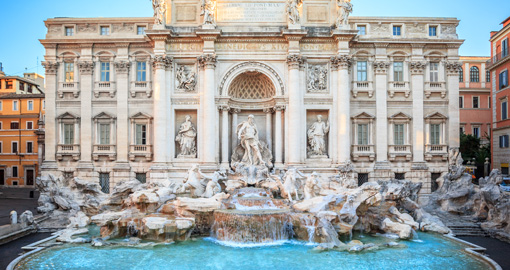 This large iconic fountain is situated in a small square and one glance will be sufficient to realize why it is so popular. This Baroque architectural masterpiece shows the god Neptune riding in a shell-shaped chariot led by seahorses. It is a tradition to throw three coins into the fountain (with the right hand over the left shoulder) to either find love to return to Rome. Your charitable donation is collected from the fountain and used to support food programs for the city's poor. 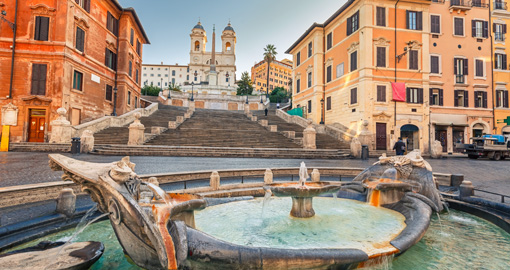 The Spanish Steps are one of the longest and widest staircases in Europe. It is an elaborate staircase with 135 steps where both the locals and tourists congregate, in the first place to meet their friends and, in the second case, to rest their weary legs. There is a beautiful fountain in the Palazzo di Spagna and at the top, there is the centuries-old Trinita del Monti Church. 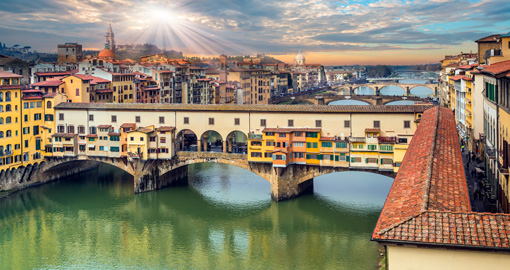 Florence is known as the Cradle of the Renaissance and is Italy’s most popular city of the arts. The Uffizi Gallery contains the world's greatest collection of Italian Renaissance art. Built between 1560 and 1580, the art collection was bequeathed to the city by the Medici family in 1743 on the condition that it never leaves Florence. Florence's The Duomo is the city's most iconic landmark. It is an enormous cathedral, with a distinct red-tiled cupola, a striking pink, white, and green marble facade, and a bell tower that dominates the city. Construction took almost 150 years and it wasn't consecrated until 1436. The Ponte Vecchio (Old Bridge) sits astride the picturesque River Arno and was the only bridge across the river until 1218. Today, it is a popular place for visitors to stop and look out over the river and also spend time shopping at the many silver and gold shops which line the bridge. There have been shops on Ponte Vecchio since the 13th Century. A wonderful viewpoint from which to really see the whole of Florence in perspective is the Piazzale Michelangelo, which is situated just outside the centre of the city. It can be reached by bus or on foot, but it is easier to walk down the hill back to town. 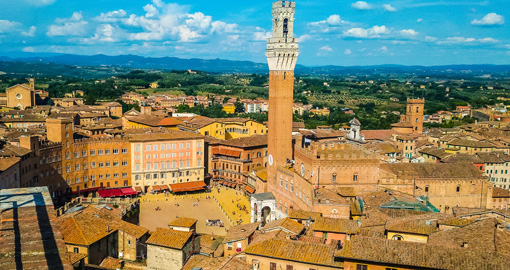 Siena, in Tuscany, is perhaps the loveliest medieval city to visit on an Italy vacation. You can wander through the old narrow streets and feel you have truly stepped back in time. The centre of Siena is the Piazza del Campo, once a Roman forum, somewhat circular in shape, with a ring of medieval-style buildings on its outer rim. You can absorb the beauty of the piazza at one of the many cafes around the perimeter. If you happen to be in Italy in either July or August, your visit to Siena may coincide with Il Palio, a very special and colourful event which takes place only twice a year. The pageant starts with a horse race around the Piazza del Campo and is a contest between 10 of the 17 Contrades (central districts/neighbourhoods) of Siena. Not to be missed!

The Leaning Tower of Pisa 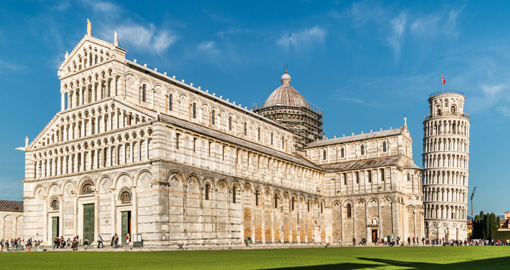 Everyone knows this famous leaning edifice. It was designed to be vertical but began to lean during its construction which took 200 years starting in 1173 AD. The angle of its lean is 10 degrees. It is 8 stories high with 207 columns and looks not unlike an enormous wedding cake. The tower is one of the four buildings that make up the cathedral complex in Pisa called Campo dei Miracoli or Piazza dei Miracoli, which means Field of Miracles. 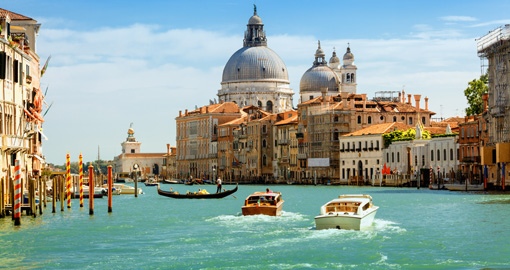 Apart from the famed Venice Canals of which there are 177, Venice also boasts 900 palaces and 105 churches plus 400 bridges. The city has many narrow streets and alleyways to explore, with hardly any motorized vehicles in its centre. The main source of transportation is by boat through the many canals. Do take a trip on a gondola to really get a feel for this wonderful city. The Piazza San Marco (St. Mark’s Square) is where you will find the beautiful St. Mark’s Basilica with its tall Campanile tower. The Bridge of Sighs was constructed in 1600 AD and passes over the Grand Canal. Its name comes from the suggestion that prisoners would sigh at their final view of beautiful Venice through the window before being taken to their cells. 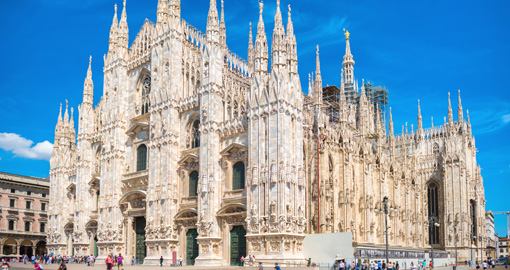 A major site in this bustling city is Milan Cathedral, also known as the Duomo. This majestic and extremely impressive Gothic-style building, made of white marble, is a city landmark. Dating back to the 14th Century, it has hundreds of spires and thousands of statues affixed to the exterior of the cathedral. From the rooftop, you can enjoy spectacular views of the city and on a clear day, see as far as the Swiss Alps. Then there is Milan's most famous mural, Leonardo da Vinci's "The Last Supper" in the Basilica Maria della Grazie. Probably the most renowned Opera House in the world is La Scala Theatre. Apart from being a performance centre for opera, it also has a museum containing a collection of paintings, costumes, and other documents relating to the history of La Scala. 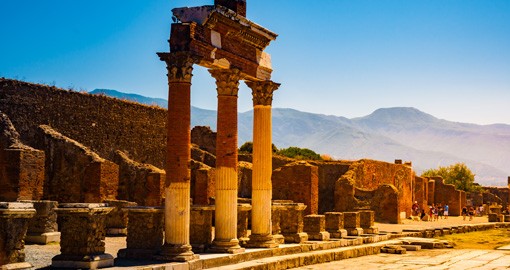 Pompeii was the scene of the major volcanic eruption of Mount Vesuvius in 79 AD. Excavations were undertaken much later in time and unearthed a typical Roman city which includes a Roman Forum, the Temple of Jupiter, and an Amphitheatre built in 70 AD, one of the oldest in the world, whose acoustics are so good you don’t need microphones to be heard from the stage. The Pompeii archaeological site contains all the ruins but the Naples Archaeological Museum houses all of the objects found during the excavations. Mount Vesuvius is the only active volcano in mainland Europe. It is best known for its eruption in 79 AD that destroyed the cities of Pompeii and Herculaneum. It has erupted about 36 times since then, most recently in 1944 AD. 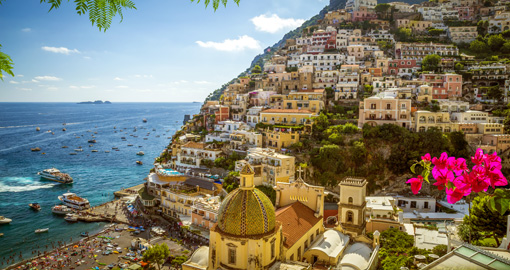 The Amalfi Coast is known for its stunning Amalfi Drive between Sorrento and the town of Amalfi. The road is carved out of the side of the coastal cliffs and offers spectacular views down to the sea, and of the towering cliffs above. There are numerous picturesque towns, ideal for a stopover. Positano is the Amalfi Coast's most photogenic town, where houses seem to tumble down to the sea. There are steep streets lined with hotels, restaurants, and small boutique shops.

The Island of Capri 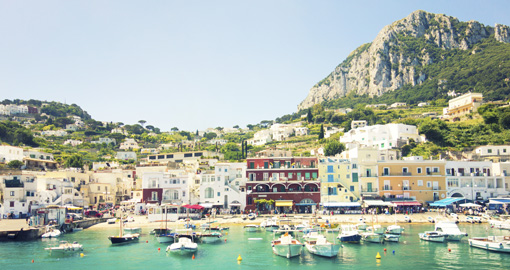 Capri can be reached by hydrofoil from both Naples and Sorrento. It is divided into two parts - Capri Town and Anacapri, the latter perched on top of a hill offering fantastic views. Capri still retains an unspoiled charm with its grand villas and abundance of brilliantly-coloured bougainvillea. The Blue Grotto is its most famous site. This is a sea cave illuminated by a natural vivid blue light where you can still see the carved Roman landing stage towards the rear of the cave. The grotto is 54 metres/175 feet by 30 metres/98 feet and rises to a height of 15 metres/48 feet. The entrance however is only 1.3 metres/4.25 feet high. You need to take a boat excursion to view it, and swimming is no longer permitted for safety reasons. 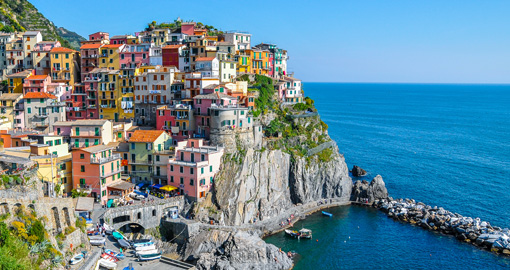 The Cinque Terre on the Mediterranean coast of Tuscany is not dissimilar to the Amalfi Coast. It is a gorgeous 9.5 kilometre/6 mile stretch of coastline along which are 5 small, traffic-free towns. If staying here on a trip to Italy, you can enjoy spectacular scenery, swimming, hiking, and boat rides. The 5 towns are Monterosso al Mare, Vernazza, Corniglia, Manarola and Riomaggiore. The most popular town is Vernazza which has a castle, remnants of an old city wall, a waterfront square and harbour, and a small beach. The whole area is a UNESCO World Heritage site. 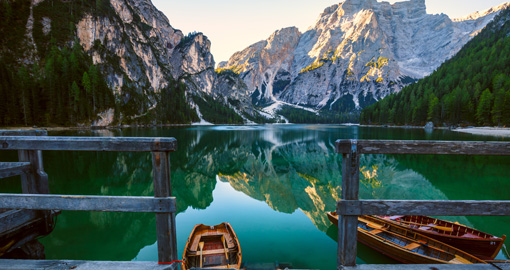 This southern part of the Alps is as much Austrian in flavour as Italian. The city of Bolzano is the gateway to the Dolomites. In winter, it is a wonderland for skiers with many excellent ski resorts. In summer, after the snow melts, there is an abundance of natural beauty consisting of green forests, waterfalls, orchards and pastureland. The mountains here are steep and rocky towering above picturesque small towns. Cable cars and chairlifts provide easy access to high altitudes. For hikers and walkers, there are well-marked trails and maintained hiking paths.