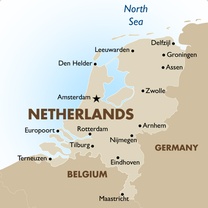 The Netherlands, also known as Holland, is a small compact country in which a substantial amount of land (approximately 17%) has been reclaimed from the sea. The name Netherlands literally means “low country. Actually, only approximately 50% of its land exceeds one metre/3.3 feet above sea level and most areas below sea level are man-made. It is a densely populated country which borders Germany to the east and Belgium to the south.

The Netherlands has a long history of social tolerance and is generally regarded as a liberal country, having legalized abortion, prostitution and euthanasia, while maintaining a progressive drugs policy. This probably stems from the Dutch being outgoing, friendly and helpful. If stopping anyone on the street, it is unlikely that when asked a question they would not reply in perfect English.

One phenomenon is the number of bicycles that are used by local inhabitants. The country has embraced this form of transportation and everywhere you go, you will see bicycles being used for both commuting and for everyday use.

The three major cities of the Netherlands are Amsterdam, The Hague and Rotterdam, all with their own style and characteristics. Amsterdam is known for its network of quaint and serene canals which traverse the city. The architecture here is unique to the country with its traditional canal houses which line the canals. A pleasant way to spend time here is to simply stroll through the narrow side streets thronged with cafes, bars and small boutique stores. Amsterdam's other main attractions are the Rijksmuseum, the Van Gogh Museum, Stedelijk Museum for contemporary art) the Anne Frank House, the Amsterdam Museum and its red-light district, strangely enough, a major tourist attraction.

The Hague is easily reached from Amsterdam. It is the seat of government and is known for being the location of the International Criminal Court. Close by is the resort of Schevenineng and Madurodam, the interesting site of the model miniature Dutch village. Rotterdam is the largest port in Europe and is well worth a visit to view its interesting, modern architecture.

At Goway we believe that a well-informed traveller is a safer traveller. With this in mind, we have compiled an easy-to-navigate travel information section dedicated to the Netherlands.

Learn about the history and culture of the Netherlands, the must-try food and drink, and what to pack in your suitcase. Read about the Netherlands's nature and wildlife, weather and geography, along with 'Country Quickfacts' compiled by our travel experts. Our globetrotting tips, as well as our visa and health information, will help ensure you're properly prepared for a safe and enjoyable trip. The only way you could possibly learn more is by embarking on your journey and discovering the Netherlands for yourself. Start exploring… book one of our Netherlands tours today!