Things to do in Northern Ireland

Every country has its outstanding and special attractions. Goway has selected its top 7 things to do in Northern Ireland (not in any particular order) for you. 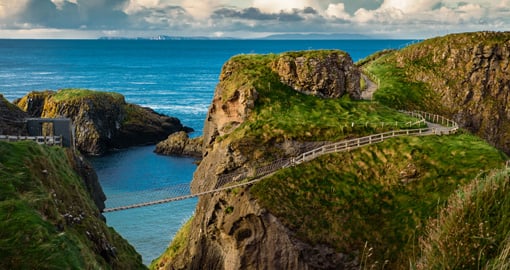 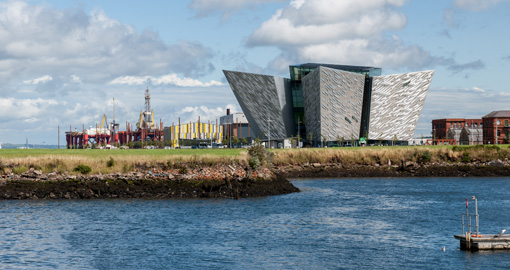 Titanic Belfast is a monument to Belfast's maritime heritage on the shipyard where the RMS Titanic was built, now called the Titanic Quarter. It relates the stories of the ill-fated Titanic which hit an iceberg and sank during her maiden voyage in 1912. The interior of this eight-storey building has a series of interpretive galleries exploring aspects of the building, design, sinking and legacy of Titanic. On the top floor of the museum is Belfast's largest conference and reception space, the Titanic Suite, a banqueting facility capable of seating 750 people. A reproduction of the original staircase on the Titanic, made famous by the James Cameron film Titanic in 1997, is located here. In front of the building is Titanica, a sculpture depicting a diving female figure. Made of bronze, it is meant to represent hope and positivity. One gallery presents a large-scale model of Titanic to illustrate how the ship appeared to its passengers and crew, depicting all three classes of cabins. A central feature in the gallery presents a 360-degree computer-generated tour around Titanic through all the levels of the vessel - from the engine room to the dining saloons and the bridge. Another gallery presents the Titanic as she is now, 3,700 metres/12,000 feet below the surface of the North Atlantic.

Tour of the “Troubles”, Belfast

Those dark days have disappeared to see a new Belfast and Northern Ireland emerge from its contentious past. A guided tour to Falls Road and Shankhill, on Ireland vacations is known commonly as a Black Taxi tour takes you through Catholic and Protestant areas and tells the stories behind the various murals, graffiti on the walls, how the “Troubles” started and finished, and everything in between during the 35 years of the conflict. There is a stop at the Bobby Sands mural on the wall of the Sinn Fein headquarters in Belfast. You will hear the story of the Hunger strikes and how Bobby Sands became a member of the British Parliament. 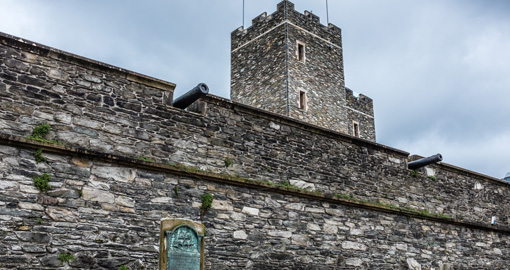 This is a city with over 1400 years of history, much of it still visible. The best way to get a feel for Derry's layout and history is to walk the 1.5 kilometre/1 mile circumference of the city's walls. Completed in 1619, Derry's city walls are the only city walls in Ireland to survive almost intact. The four original gates were rebuilt in the 18th and 19th Centuries. Also known simply as Derry, its nickname the Maiden City, derives from the fact that the walls have never been breached by invaders. St. Columb’s Cathedral was built between 1628 and 1633 from the same brick as the city walls. It is Londonderry’s first post-reformation church and its oldest surviving building. The neighbouring chapter house contains historical artifacts including paintings, old photographs and the four huge padlocks used to secure the city gates in the 17th Century. Outside the city walls, the neo-Gothic Guildhall was built in 1890, then rebuilt after a fire in 1908. It has fine stained-glass windows and its clock tower was modelled on London's Big Ben. Londonderry has several interesting museums, which include the Tower Museum that has exhibits about the local history, the Siege Museum, and the Foyle Valley Railway Museum. 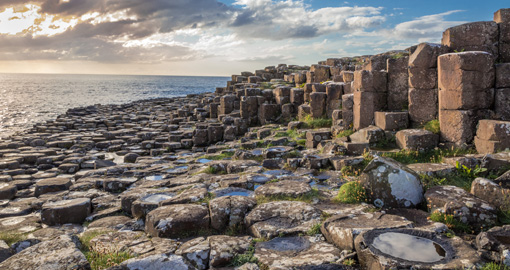 The Giant's Causeway is an area containing about 40,000 interlocking basalt columns sticking out of the sea, the result of an ancient volcanic eruption some 50 to 60 million years ago. The tops of the columns form stepping stones that lead from the cliff foot and disappear under the sea. It is located in County Antrim on the north coast of Northern Ireland, is a UNESCO World Heritage Site, and a national nature reserve to be enjoyed on Ireland tours. According to legend the columns are the remains of a causeway built by a giant Finn MacCool, who accepted a challenge from Benandonner another giant. He built the causeway across the North Channel to Scotland so that the two giants could meet. Upon seeing Finn MacCool, Benandonner fled back to Scotland in fright. There are identical basalt columns at Fingal's Cave on the Scottish isle of Staffa. Some of the structures in the area, having been subject to several million years of weathering, resemble objects, such as the Organ and Giant's Boot structures. 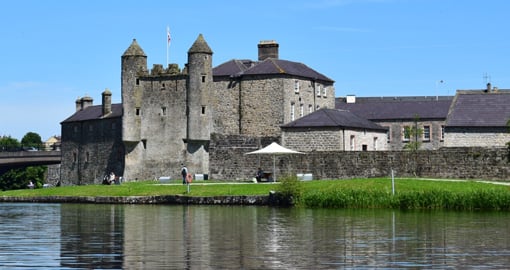 Enniskillen is a town in County Fermanagh. Enniskillen Castle was built in the 16th Century and now houses the Fermanagh County Museum and the Regimental Museum of the Royal Inniskilling Fusiliers. The first Enniskillen castle featured in Irish rebellions against English rule in the 16th Century. In the 18th Century, the castle was remodelled as the Castle Barracks. The Fermanagh County Museum focuses on the county's history, culture, and natural history. Exhibits include the area's prehistory, natural history, traditional rural life, local crafts, and history of the castle. The Inniskillings Museum is the regimental museum of the Royal Inniskilling Fusiliers and the 5th Royal Inniskilling Dragoon Guards. Displays include uniforms, medals, flags, regimental regalia, weapons, and other military memorabilia. 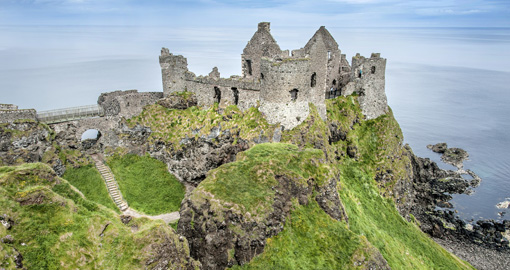 Portrush is a small seaside resort town in County Antrim. It is next door to another resort, Portstewart. The town is well known for its three sandy beaches, the West Strand, East Strand, and White Rocks as well as the Royal Portrush Golf Club, the only golf club outside mainland Great Britain which hosted the Open Championship. The main part of the old town, most hotels, restaurants, and bars are built on a mile-long peninsula. It is handy to visit the Giants Causeway. Portrush is home to one of Northern Ireland's best-known nightclubs. The Kelly's complex consists of a multitude of bars, clubs, and is Northern Ireland's largest nightclub complex. The Skerries, a collection of rocks located just off the coast, are an important habitat for several bird species, some unique to Northern Ireland. Nearby is Dunluce Castle, a now-ruined medieval castle. 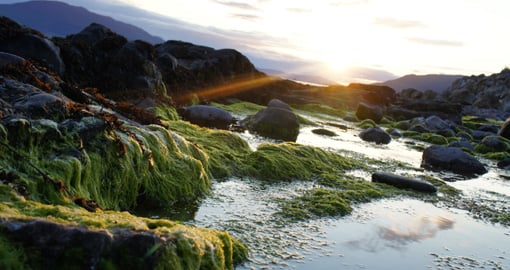 County Down has many attractions on Ireland vacations. It is located immediately south of Belfast en route to Dublin. The Mountains of Mourne here is an area of outstanding natural beauty and consist of striking landscapes with lakes and abundant wildlife. The Mourne Wall is among the more famous features. It is a 35 kilometre/22-mile dry-stone wall that crosses fifteen summits. Some of the mountains have names beginning "Slieve", from the Irish word Sliabh meaning "mountain". There are also a number of curious names: Pigeon Rock, Buzzard's Roost, Brandy Pad, the Cock and Hen, Percy Bysshe, and the Devil's Coach Road. Just below the Mountains of Mourne is the beautiful and lush Tollymore Forest Park with its walking trails along the Shimna River past bridges, grottos, and caves. You can see exotic trees such as the Monkey Puzzle and the Eucalyptus. Mount Stewart is a stately home owned by the aristocracy. There are 15,000 items of family memorabilia and 5 extraordinary gardens to explore. The Down County Museum was once a Georgian jail used as a final staging post for convicts bound for Australia. Today, it tells the story of these and other prisoners. You can take a journey through 9,000 years of history through our permanent exhibition “Down Through Time”.