Norway: Things to do

Every country has its outstanding and special attractions. Goway has selected its top 11 things to do in Norway (not in any particular order) for you to enjoy on your visit to this destination. 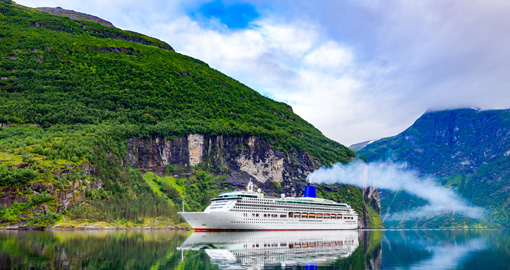 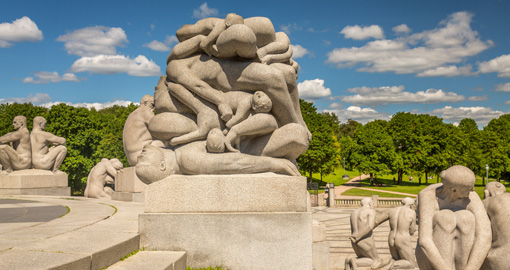 Vigeland Park is the world's largest sculpture park made by a single artist. This open-air sculpture park is officially in Frogner Park but is known more popularly as Vigeland Park. It is the lifelong work of Gustav Vigeland and where you can see, on a Norway vacation, 212 sculptures made of bronze and granite. There is also a museum which houses not only sculptures but also drawings, woodcuts and wood carvings. One of the park's more popular statues is the eye-catching Angry Boy. The Children’s Playground has a collection of eight bronze statues showing children at play. 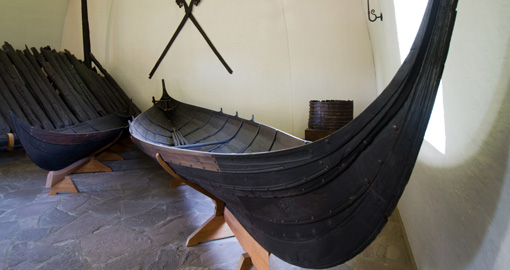 This museum in Oslo contains the world’s best–preserved Viking ships plus other archaeological finds such as small boats, toboggans, tools, textiles and household utensils from the same era. The museum is most famous for the completely whole Oseberg ship which was discovered in a large burial mound at a Norwegian farm. This ship is commonly acknowledged to be among the finer artifacts to have survived from the Viking Era. Other main attractions at the Viking Ship Museum are the Gokstad ship and Tune ship. 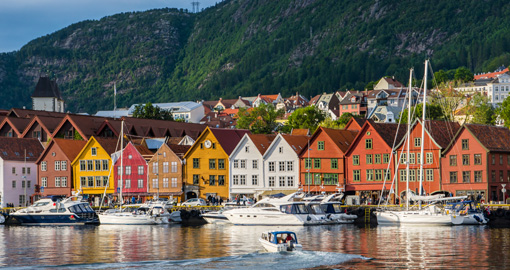 Bryggen translates The Dock. It is a series of Hanseatic commercial buildings lining the eastern side of the harbour in Bergen and has, since 1979, been on the UNESCO list of World Cultural Heritage sites. Bryggen houses museums, shops, restaurants and pubs. Many of the shops sell traditional and unique crafts. It was built after the great fire here in 1702 and is one of the best-known urban areas from the Middle Ages in all of Norway. There are several attractions in the area, from the Fish Market to Bergenhus Fortress. The Bryggens Museum is the place to start on a Norway vacation if you want to explore all the historic attractions. This cultural history museum houses finds from the archaeological excavations. 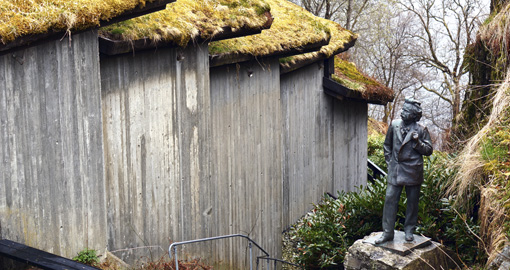 Troldhaugen was the home of Norway’s most famous composer Edvard Grieg for 22 years (1885 to 1907). He composed many of his best-known works in the little garden hut here. Grieg is reputed to have said that children called the nearby small valley "The Valley of Trolls" and gave the name for his house. Grieg's and his wife's ashes are inside a mountain tomb near the house. A museum building has been added with a permanent exhibition of Edvard Grieg's life and music as well as a shop and restaurant. In the villa’s living room is Grieg’s own Steinway grand piano which he was given as a silver wedding anniversary present. Today it is used for private concerts and special occasions. The windows behind the stage provide the audience with a wonderful view of the composer's hut and an attractive lake. On trips to Norway, Lunchtime concerts take place every day from May to September. Evening concerts are available every Sunday from mid-June to early September. 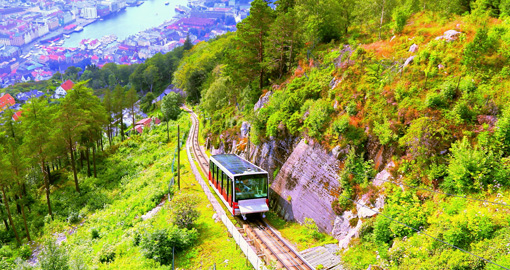 To enjoy a bird’s-eye view of the city of Bergen and the surrounding fjords, take the funicular to the top of Mount Floyen. The journey time is 6 minutes. The Floibanen funicular is an 850 metre/2760 feet long trip from the Bergen city centre. At the top are hiking trails, a cafe and a restaurant. 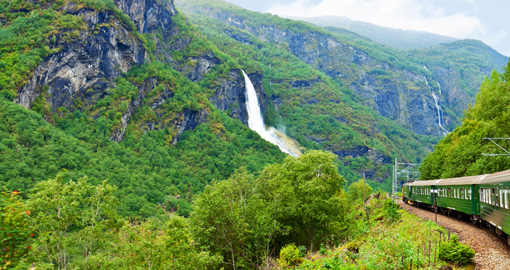 The Flam Railway is one of the world's most spectacular train journeys providing panoramic views of some of most majestic scenery in the fjords on a Norway vacation. It is also one of the world's steepest railway lines. The journey passes by amazing mountain landscapes, gushing waterfalls and goes through 20 tunnels. The train takes you from sea level in the village of Flam to the Myrdal mountain station at 870 metres/2745 feet. You will pass through wild and beautiful mountain scenery with waterfalls and steep mountainsides. You will, on an organized tour, embark on a cruise on the Sognefjord, the world’s longest and deepest fjord, to Balestrand.

Train Journey between Oslo and Bergen 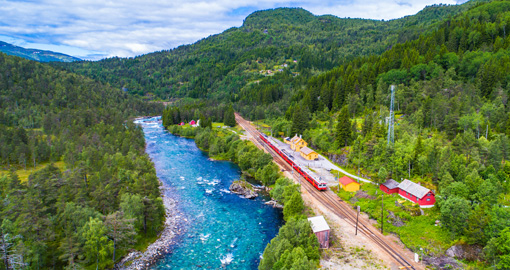 This has to be one of the world’s most beautiful rail journeys as well as one of the highest stretches of rail track. It takes just over 6 hours for a distance of some 485 kilometres/300 miles and provides the opportunity to see some of Norway’s best scenery. From Oslo, after passing through the forests of southern Norway, it climbs up onto the Hardangervidda Plateau. Then it continues down through the pretty country around Voss and on to Bergen. En route it comes within touching distance of the fjords. 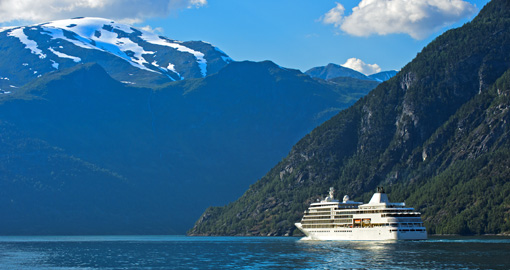 For a special experience, consider one of the express boats and car ferries that sail up and down the Norwegian coast visiting towns and villages and passing small islands and fjords. Hurtigruten, the coastal steamer, serves over 30 ports along the Norwegian coast from Bergen to Kirkenes in the far north. The round-trip journey takes 12 days on which you see 34 ports, 22 of which are north of the Arctic Circle. 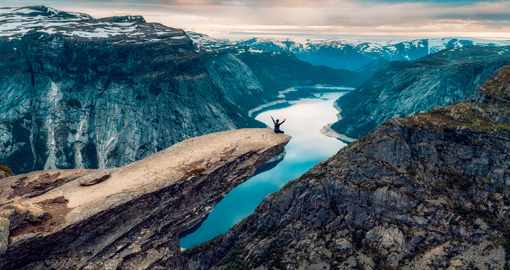 On a Norwegian vacation, there are more than one thousand fjords to visit which are found along the Norwegian coastline. A fjord is a long, deep, narrow body of water that heads from the sea, inland, usually with very steep towering walls of rock on both sides. The Norwegian fjords are nothing less than spectacular. Some of the major fjords include the following. The Sognefjord is Norway’s longest and deepest fjord extending just north of Bergen to the Jotunheimen National Park. Its depth reaches 1300 metres/4225 feet and the highest point is 1700 metres/5440 feet. It has an arm called the Naeroyfjord, listed as a UNESCO World Heritage site and where you will find the highest mountains in Norway. The Hardangerfjord is just south of Bergen, and is the world’s 4th largest fjord and the second longest in Norway, stretching 179 kilometres/111 miles. Norway's 3rd largest glacier is located here. The Geirangerfjord is surrounded by snow-covered mountain peaks and lush, green vegetation. Stretching for 15 kilometres/9.3 miles, it is recognized as a UNESCO World Heritage Site. It is surrounded by some of the steepest mountains on the west coast of Norway. The sides rise practically vertically out of the fjord. Dramatically beautiful waterfalls plunge down into the fjord. The midnight sun is a natural phenomenon that occurs in the summer months in places north of the Arctic when the sun remains visible at midnight. Around the summer solstice, which is approximately 21 June in the Northern Hemisphere, the sun is visible for the full 24 hours if the weather is favourable. In Svalbard, Norway, the northernmost inhabited region in Europe, there is no sunset from approximately 19 April to 23 August. The further north you go, the more nights of midnight sun you experience. Some of the best places to enjoy this phenomenon are Bode, Svalbard and Tromso. Also known as the Aurora Borealis, this phenomenon is bright dancing lights which are actually collisions between electrically-charged particles from the sun that enter the earth's atmosphere. Northern Norway during the polar night is the best bet for experiencing the Northern lights which occur at roughly 27-day intervals, the time it takes the sun to rotate once. October, February and March are the best months for seeing them and you need a dark, clear night. On trips to Norway, they are visible from late September to March anywhere from 6 pm to 6 am. Some of the places to view the Northern Lights are Kirkenes, the Lofoten Islands, Tromso, Hammerfest and Svalbard.