Portugal: Things to do

Every country has its outstanding and special attractions. Goway has selected its top 16 things to do in Portugal (not in any particular order) for you to enjoy on your visit to this destination. 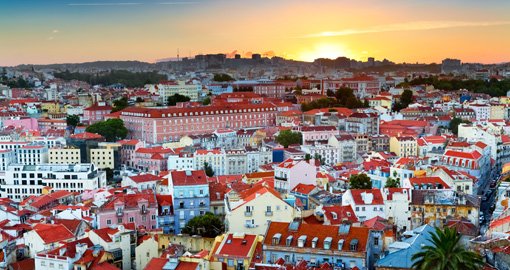 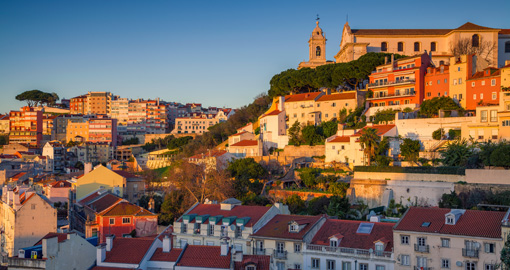 Alfama is the oldest district of Lisbon, spread over a slope from Sao Jorge Castle down to the river. It contains many important historical attractions, as well as an abundance of Fado bars and restaurants. Walking around Alfama on a Portugal vacation is like walking back in time. It is made up of narrow cobblestone streets and whitewashed houses with wrought-iron balconies. Among the churches of the Alfama are Lisbon Cathedral dating back to the 12th Century and one of the oldest in the city, the Monastery of Sao Vicente de Fora dating back to the 16th Century and the baroque Church of Santa Engracia, now converted into a National Pantheon for important Portuguese dignitaries. 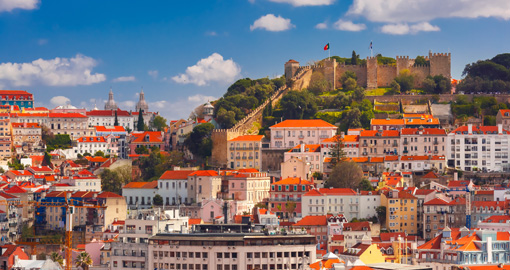 Sao Jorge Castle, which dominates a hilltop offering panoramic views of Lisbon, has a long history. It was a royal residence until the 16th Century. Inside the walls of the castle are the ruins of the royal palace, gardens, and a citadel partially encircled by a moat, now dry, and a large terraced square. At night, it is illuminated. Apart from the castle with its eleven towers, you can also visit a small museum. 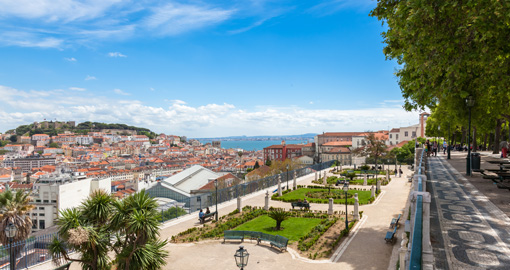 Bairro Alto (translates as Old Neighbourhood) is a central, picturesque district dating from the 16th Century with cobblestone streets. It has been the haunt of artists and writers. It is a good place on Portugal trips to find high-end shops and lots of bars and restaurants. It is very lively in the evenings as it is the principal nightlife district of Lisbon. Close by is Miradouro de Sao Pedro de Alcantara, a garden-terrace with panoramic views over the city and two of the city's most interesting churches. 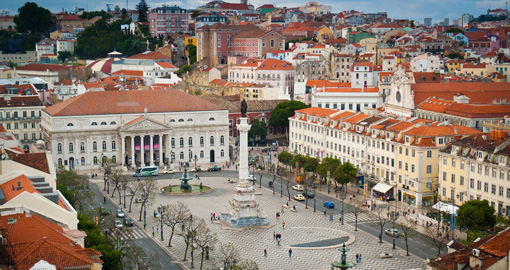 Rossio Square has been one of Lisbon’s main squares since the Middle Ages and is the liveliest square in the city, where people stop to sit and relax. It has been the setting of popular revolts and celebrations, bullfights and executions. Today, it is now a meeting place for Lisbon locals and visitors alike. Some of the cafes and shops in the square date back to the 18th Century. On either side of the square are two baroque fountains and in the centre is a monument representing Justice, Wisdom, Strength, and Moderation, qualities attributed to King Dom Pedro IV, whose statue stands on top of the monument.

The Monument to the Discoveries, Lisbon 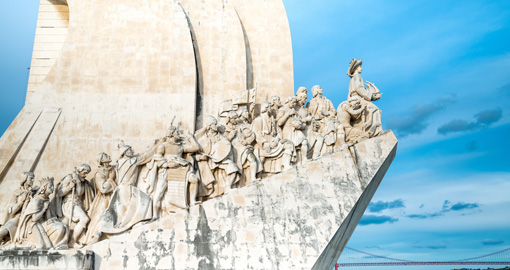 The original monument was built in honour of Henry the Navigator, who was instrumental in the success of the Portuguese explorations during the 15th Century which was known as the Age of Discoveries. It stands at the marina in Belem, which is where in 1497 Vasco da Gama embarked on his voyage to India. Today, there is a replica only which was built in 1960 on the occasion of the 500th anniversary of Henry the Navigator's death. It is large, being 50 metres/170 feet tall and is shaped like a ship's prow. The monument shows more than 30 statues of people who played an important role in the discoveries. Visitors can enter the monument, which contains a museum, exhibition halls and other rooms spread over 7 floors. The rooftop offers great panoramic views of Belem and the Tagus River. 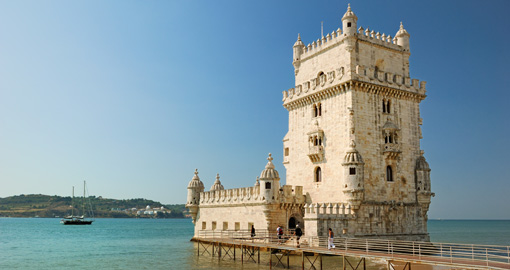 The Belem Tower was built in 1515 as a fortress to guard the entrance to Lisbon's harbour and was the starting point for many of the Voyages of Discovery. It incorporates a number of stonework sculptures depicting historical figures. Facing the river are arcaded windows, Venetian-style loggias and a statue of Our Lady of Safe Homecoming, a symbol of protection for sailors on their voyages. It is a UNESCO World Heritage Site because of the significant role it played in the Portuguese maritime discoveries. 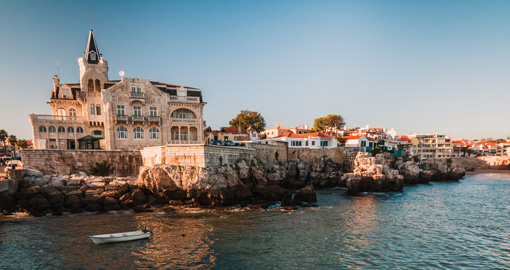 Cascais is a delightful Portuguese fishing town not far from Lisbon. It is also a charming vacation resort which combines historical aspects with elegance. It is a blend of 19th and 20th Century architecture. Within easy reach is the beach at Guincho that attracts windsurfers. In the centre of Cascais are an imposing fort and the Museu do Mar that depicts the story of Cascais and its fishing history. There is also an outstanding palace with a collection of 25,000 rare books. 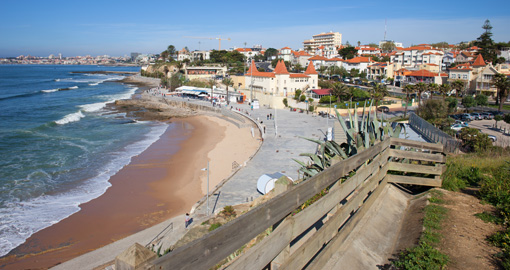 Estoril is a resort next door to Cascais and is known as the vacation destination of the rich and famous. It has an elegance which is reminiscent of resorts on the Cote d’Azur in France. You will see upscale villas, hotels bars and restaurants. The Hotel Palacio, built in the 1930s, is a legend here and shares a palm-lined park with the Casino de Estoril, the largest casino of its kind in Europe. 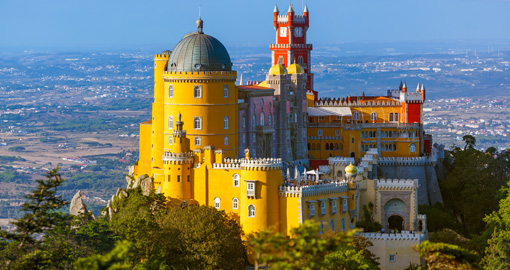 Sintra is fairly close to Lisbon and should not be missed on a Portugal vacation. Time spent here can be one day or several days. It is a picturesque town situated among pine-covered hills. It was once the retreat of nobility and affluent Portuguese who built palaces, mansions and gardens. For such a small town, it has an abundance of attractions. The town itself has cobblestone streets with quaint houses plus shops and cafes everywhere. The major sights include the National Palace with its mix of Gothic and Moorish architecture and arabesque courtyards. It was the preferred residence of nobility between the 15th and the 19th Centuries. The interior has various staterooms which reflect the extensive history of the palace. Another attraction is the ruins of the 10th Century Moor’s Castle which stands on top of a high hill from which you have sweeping views of not only Sintra but down to the Atlantic Ocean. A third attraction is National Palace of Pena which has an unusual architectural style with onion-shaped domes, Moorish gates and towers in pink and lemon colours. The extravagant interior is also unusual with its many treasures of precious Meissen porcelain, Portuguese-style furniture, murals and nudes of buxom nymphs. Besides these three, there are several other mansions and gardens to keep you occupied. 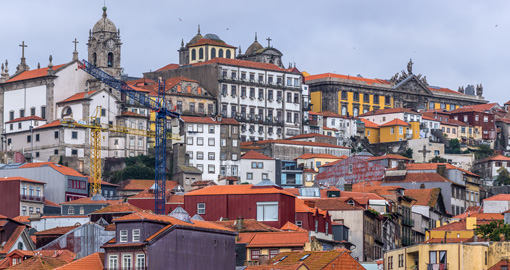 A UNESCO World Heritage site in Porto is the picturesque riverfront promenade, Cais da Ribeira, which features many pastel-coloured houses located in medieval narrow streets and alleyways. The harbour is filled with all sizes of boats bobbing in the water. It really comes to life in the evening when the numerous cafes, bars and restaurants, hidden beneath medieval arches, are at their busiest. The House of the Prince here is the birthplace of Prince Henry the Navigator but is now home to the city’s archives. 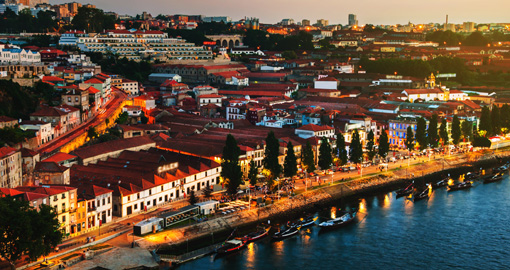 Across the river is Vila Nova de Gaia with its more than 20 port-wine lodges which are open for tours and tastings, You can select from a huge port wine list and sip a glass on a terrace with stunning views across the city. Most of the world's supply of Port is stored and aged here and a visit to any of the warehouses on Portugal trips should not be missed. In the alleys up the hill, you will find 19th Century manor houses and even more port lodges including the world-renowned Taylor's, especially worth a visit on a Portugal vacation. There are also quite a number of cellars offering free tastings. Ribeira de Gaia has also some typically local and international restaurants. 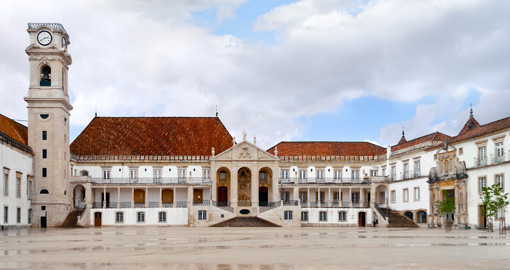 After Lisbon and Porto, Coimbra has the most historic significance. It was the medieval capital of Portugal for over 100 years and has been the home of the country’s greatest university for 500 years. You will see students everywhere during the academic year. The centre of the city is very attractive situated on the banks of a river. Coimbra also has structures from the Roman era including a well-preserved aqueduct. Then there is the city’s modern side with a contemporary riverfront park complete with bars and restaurants. 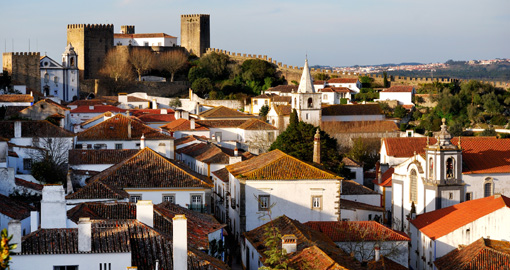 Obidos is one of the most beautiful and picturesque towns in Portugal. It is a historic walled town with a centre of cobblestone streets and whitewashed houses. There is a hilltop castle now converted into one of Portugal’s most luxurious pousadas, luxury accommodation in restored historical buildings. The main street is lined with chocolate and cherry liquor shops. Obidos was once owned by the Queen of Portugal and this has left a legacy that every house or shop has been lovingly cared for and maintained. Obidos is an excellent example of a traditional Portuguese historic town. 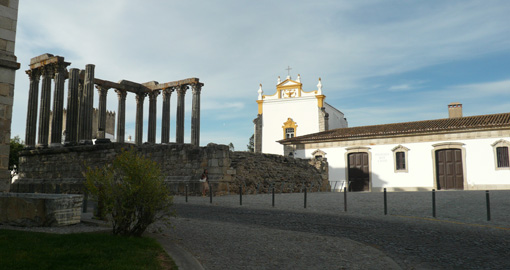 Evora is one of the most beautiful charming medieval towns in Portugal. It is a UNESCO World Heritage site due to its well-preserved old town centre, partially enclosed by medieval 14th Century walls. It also has a large number of monuments dating from different historical periods. Some of the major sites include an imposing cathedral, a Roman Temple and Roman Baths. It is also a lively university town. Evora is surrounded by the Alentejo, a region of olive groves, fortified towns and traditional villages. 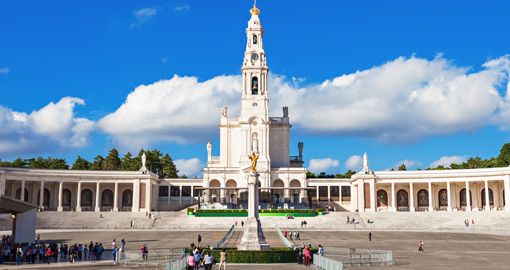 Fatima is a place of pilgrimage for many Catholics in commemoration of the apparition of the Virgin in 1917 to three young shepherds. On the 13th of every month, thousands of pilgrims make their way to Fatima. The Basilica here contains the tombs of two of these shepherds. The Crown of the Virgin, located in the Chapel of the Apparitions, contains the bullet that was removed from Pope John Paul II after a failed assassination attempt. Besides the Shrine, you can visit the Museum of Sacred Art and Ethnology, the Wax Museum and the 1917 Fatima Museum. 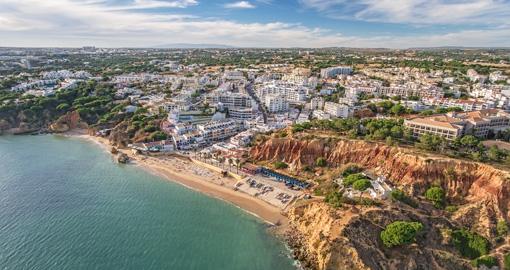 The Algarve is an all-year-round destination offering a mild climate and sunshine on a Portugal vacation. Located in the southern part of Portugal on the Mediterranean Sea, it is known for its safe and attractive beaches. It is an extensive region stretching along a beautiful coastline. There are many resorts to choose from, many of which started out as fishing towns. The type of resort required depends on your style and tastes as they vary from very lively to sedate. The coast becomes progressively wilder as you head west with wild beaches ideal for surfing. The eastern coast between Faro and the Spanish border is very different. The resorts here have a stronger Portuguese flavour than those in the central part of the Algarve. Inland Algarve offers pretty castle towns and historic villages and flower-covered hillsides. The Algarve Way hiking trail has footpaths and cycle routes. Some of the major resorts are Albufeira, Lagos Sagres, Portimao, Silves, Vilamoura and Praia da Rocha.