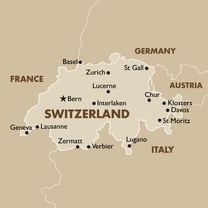 Switzerland is bordered by Italy to the south, France to the west, Germany to the north, and Austria and Liechtenstein to the east. Switzerland is a landlocked country geographically divided between the Alps, the Swiss Plateau and the Jura. It is made up of four main linguistic and cultural regions, German, French, Italian and Romansh-speaking. It is famous for its mountains and lakes. Switzerland has one of the best public transport networks in the world

The Alps make up about 60% of the country's total area but the majority of the population lives in the Swiss Plateau. The country has more than 1500 lakes which together with glaciers, cover about 6% of the country’s terrain. The largest lake is Lake Geneva in western Switzerland shared with France. Lake Constance is the second largest Swiss lake and borders Austria and Germany. Other important lakes are Lake Lucerne and Lake Maggiore, the third largest lake.

Forty-eight of Switzerland's mountains are 4,000 metres/13,000 feet above the sea in altitude or higher. The best known are the Matterhorn (4,478 metres/ 14,692 feet), the Jungfrau (4,158 metres/13,642 feet) the Eiger and the Monch. Because of Switzerland’s climate in the mountainous regions, it is home to some of the most excellent skiing in the world with the well-known ski resorts of St. Moritz, Davos, Klosters, Zermatt, Andermatt, Gstaad and Adelboden to name just a few of the many ski centres.

As skiing is to winter, perhaps the Swiss lakes are to summer due to their beauty, mountain backdrops and charming lakeside resorts. Some of the major lakes are the mirror-like Lake Geneva, Europe’s largest lake, Lake Lucerne with its background of majestic peaks, Lake Constance with its mild climate, flowers, gardens and palm trees, Lake Thun with the lovely resort of  Interlaken with its gem and Lake Lugano with its Italian influences.

Zurich is Switzerland’s principal city although not it's capital. It has been regarded as being among the most desirable cities in the world to live in. it boasts not only many museums, theatres and concert halls, but a multitude of bars, nightclubs and discos. The Bahnhofstrasse is one of Switzerland's prime shopping streets.

Geneva is Switzerland's second largest city located on the French border. It is where a number of international organizations have their headquarters including the European headquarters of the UN, the International Committee of the Red Cross and, the World Health Organization.   Geneva is also well known for its Car Fair, Inventors' Fair and Book Fair.

Basle or Basel, in northwest Switzerland, is an important rail hub. It has a lively art scene with a good selection of art galleries and museums.

Lausanne is Switzerland's fifth largest city situated on Lake Geneva. It houses the headquarters of the International Olympic Committee (IOC) plus is the base for a number of international sports federations.

Lucerne is an economic and cultural centre in central Switzerland. With its lake location and mountain backdrop, it is an attractive resort and an excellent starting point for excursions to the surrounding area.

Berne, the capital of the country, has a unique infrastructure and narrow cobbled streets with a UNESCO World Heritage designation.

Lugano is the most important city in Southern Switzerland and part of the Italian-speaking canton of Ticino. Lake Lugano is surrounded by hills and mountains and has an exceptionally mild climate, wonderful views and colourful vegetation.

Interlaken, the capital of Switzerland's beautiful Bernese Oberland, is a town surrounded by the crystal-clear lakes of Thun and Brienz and is situated close to Eiger, Monch & Jungfrau mountain ranges

At Goway we believe that a well-informed traveller is a safer traveller. With this in mind, we have compiled an easy-to-navigate travel information section dedicated to Switzerland.

Learn about the history and culture of Switzerland, the must-try food and drink, and what to pack in your suitcase. Read about Switzerland's nature and wildlife, weather and geography, and 'Country Quickfacts' compiled by our travel experts. Our globetrotting tips, as well as our visa and health information, will help ensure you're properly prepared for a safe and enjoyable trip. The only way you could possibly learn more is by embarking on your journey and discovering Switzerland for yourself. Start exploring… book one of our Switzerland tours today!