Switzerland: Things to do

Every country has its outstanding and special attractions. Goway has selected its Top 8 Things to Do in Switzerland (not in any particular order) for you to enjoy on your visit to this destination. 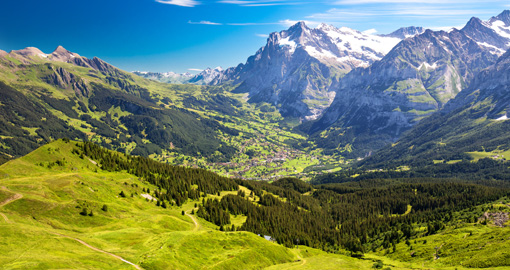 The Jungfrau region is quintessentially typical of what it is all about on Switzerland vacations. It offers mountain scenery with alpine peaks, waterfalls, ski resorts in the winter, beautiful lakes, unusual railway journeys and the opportunity to simply relax in gorgeous scenic countryside. The best bases from which to explore the Jungfrau region are Interlaken situated between two lakes, Brienzersee and Thunersee and Lauterbrunnen situated in a valley sandwiched between rock faces and mountain peaks and surrounded by thundering waterfalls and alpine meadowland. Lauterbrunnen is located in one of the largest nature conservation areas in Switzerland. 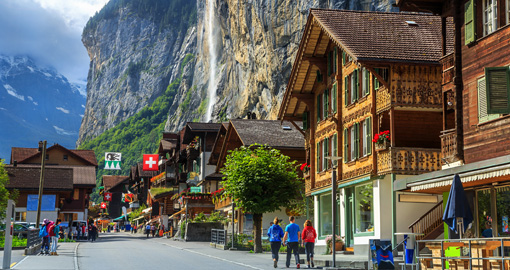 One highlight here is the Jungfrau railway which has been making its journey to Europe’s highest-altitude railway station for over 100 years The Jungfraubahn is a cogwheel train that takes visitors from the Kleine Scheidegg Mountain past the Eiger and Monch Mountains up to the Jungfraujoch. It covers a distance of around 9 kilometres/5.5 miles and on arrival at the peak, you will feel you are on top of the world. On clear days, the view extends to the Vosges Mountains in France and the Black Forest in Germany.

Another experience is the Schilthornbahn, a cableway that departs from Lauterbrunnen and ascends in 34 minutes the Schilthorn Mountain. At the top are a revolving restaurant and a view reaching to Mont Blanc, Europe’s highest mountain and again to the Black Forest. 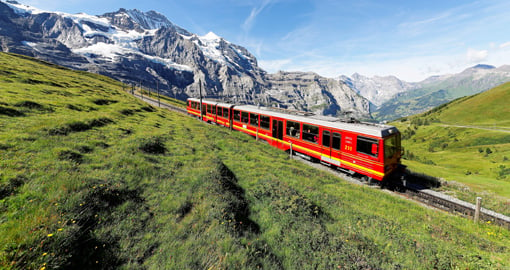 Other resorts to visit include Wengen, reached only by a rack railway from Lauterbrunnen. The town nestles at the foot of the Eiger, Monch and Jungfrau Mountains and is a great place for walks or hikes. Another is Grindelwald with its narrow streets and picturesque houses. It is also close to a couple of glaciers reached on foot. The town has a small museum where you can learn about alpine life, local cheese-making and the history of skiing and mountaineering in the valley. Murren is another nearby village which does not allow motorized vehicles. It is a place where time has stood still. Murren is reached from Lauterbrunnen by funicular to Grutschalp and from there by a 5.5-kilometre/3.4 mile narrow-gauge railroad. You can enjoy amazing views of the Jungfrau Mountain from here. 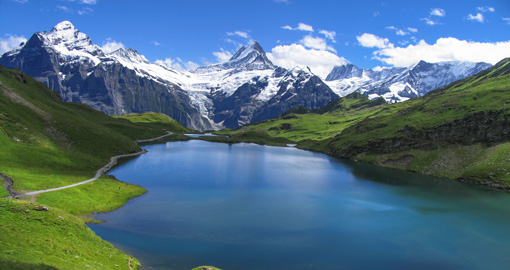 The Matterhorn is one of Switzerland’s most magical mountains shaped like a pyramid with four faces. Facing north and east, it overlooks the town of Zermatt, one of Europe’s major ski resorts, which is at the foot of the mountain, is car-free, and the base for exploring the Matterhorn. In Zermatt is the Matterhorn Museum which tells the history of the mountain. To reach the Matterhorn, you take Europe’s highest cogwheel railway, the Gornergratbahn. En route, you will view 7 glaciers and 29 peaks. Regular avalanches send the snow down to accumulate on the glaciers at the base of each face. 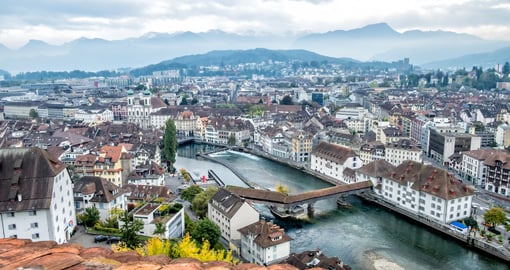 If looking for an attractive city on trips to Switzerland Lucerne, located on a large lake is the place to stay. It has an old, medieval town with 15th Century colourful houses, covered bridges and the famous Kapelbrucke water tower dating from 1333. The Rosengart Collection is an art gallery with over 200 works by 23 artists including Klee, Picasso, Cezanne and Chagall. Lucerne is also a great base for exploring the area. Nearby Mount Pilatus overlooks the city and can be reached by cogwheel railway. Wonderful boat cruises can be enjoyed lasting from one hour up to 3 hours on Lake Lucerne. 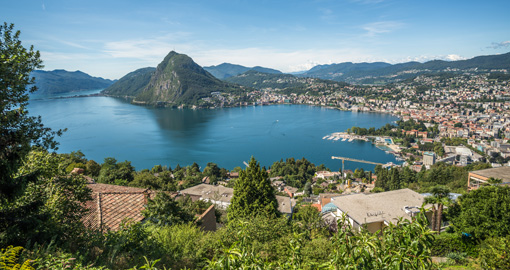 Lugano has been described as a town “with a Mediterranean flair” with its palm trees and “Swiss with an Italian accent” as the principal language here is Italian. Located on the lake of the same name and surrounded by mountains, it is a town of numerous parks, sub-tropical plants and colourful villas. Its historic centre is traffic-free. The two closest mountains to Lugano are Monte San Salvatore and Monte Bre both of which can be reached by funicular railway from the outskirts of the town and which provide panoramic views of the town, the lake and the alpine scenery including views into Italy not far away. Lake Lugano is perfect for boat cruises. There are hop on hop off cruises to allow you to explore the numerous attractive villages located on the lake’s waterfront. 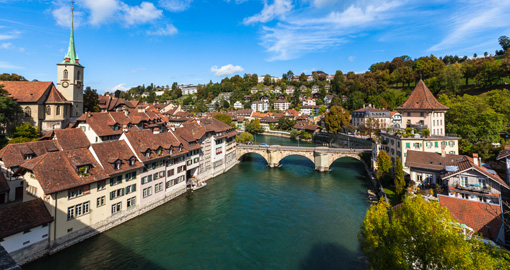 The centre of Bern, Switzerland’s capital is a UNESCO World Heritage site. This beautiful Old Town has 6 kilometres/3.5 miles of medieval arcades dating back to the 12th Century. There are a number of decorative fountains depicting historical and folkloric characters. The arcades contain many shops and bars. Bern’s ornate clock tower (Zytglock) is where revolving figures appear and whirl around at 4 minutes before each hour. There are tours to see how the clock mechanism works. The 15th Century Gothic cathedral has Switzerland’s tallest spire. You can climb a spiral staircase and enjoy views of the city from the top of the cathedral. Bern, of course, is famous for its bears. The Bear Park here is home to two bears that have been living in this park since 2009. The previous home for the bears was in the bear pit in the centre of the city. 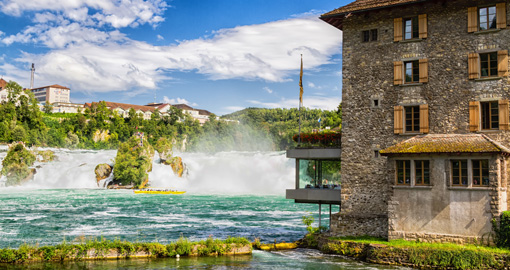 Switzerland is a country blessed with many natural wonders and these include some magnificent waterfalls. Two of the most important on Switzerland vacations are Schaffhausen Rhine Falls and The Trummelbach Falls. The Schaffhausen Rhine Falls are situated in the north of the country next to the banks of the Rhine River. The falls are the largest waterfall in Europe and certainly one of the most beautiful in Switzerland. The sheer size of them is impressive. In the middle of the falls stands a large rock that has withstood the elements for a thousand years. The rock can be reached on a tour of the Rhine Falls during which you can observe this natural spectacle up close.

The Trummelbach Falls are near Lauterbrunnen in the Jungfrau region. In fact, there are 10 individual falls which are a result of melting snow from the 3 high mountains surrounding Lauterbrunnen. The underground parts of the falls are illuminated and are reached by elevator to inside the mountain. These are the world's only underground glacier waterfalls that are accessible by elevator. 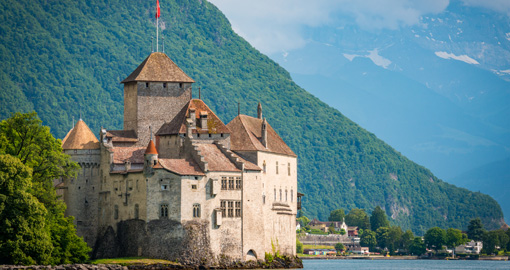 There are a number of historic castles in Switzerland. Chateau de Chillon is the most visited on Switzerland tours and is situated on an island on Lake Geneva at the eastern end of the lake between Montreux and Villeneuve. For four centuries, Chillon was the residence of the Counts of Savoy (from the 12th to the 16th Century). The castle can be reached by boat from Montreux. Inside the castle are wall paintings from the 14th Century, subterranean vaults and dungeons. The entire castle consists of 25 buildings and 3 courtyards. You can watch 8 short films shown on 13 terminals located throughout the castle.

Switzerland is a haven for skiers with numerous ski resorts to choose from. Here are a few which are well-known internationally. 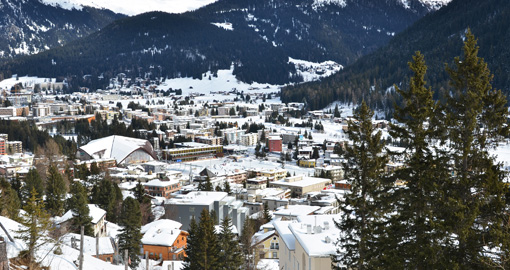 Davos/Klosters together are one of the largest and one of the highest ski resorts in Europe offering 300 kilometres/ 180 miles of ski runs aimed mainly at the intermediate level. Davos is home to some sophisticated and upscale hotels and restaurants whereas neighbouring Klosters has more of an alpine village feel. Davos tends to be livelier than Klosters but lacks the latter's traditional charms.

One of the oldest and most famous winter sports resorts is St. Moritz which has twice hosted the Winter Olympics. The ski-jump and slopes are frequently the sites of world ski events. But it is not just for experts and Olympians. It caters to all skill levels and is known for some of Switzerland's best intermediate slopes. There are plenty of other things to do in St. Moritz in the winter including ice skating rinks, tobogganing, Nordic skiing and bobsledding. 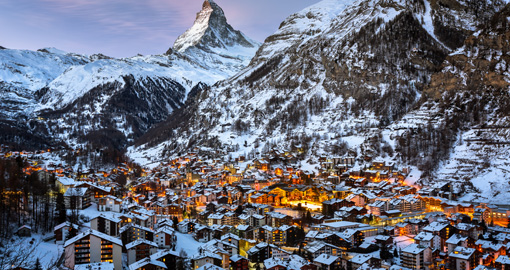 Zermatt is located under the Matterhorn which rises directly behind the town and is visible from much of the mountain's 350-kilometer trail system. It is Switzerland highest ski resort and offers all-year-round skiing. It is well-known for its après-ski life. Zermatt is famous for its long ski runs with slopes for all skill levels including beginners and children. A sunny climate and the chance to ski into Italy runs are added attractions on Switzerland vacations.

The Jungfrau region offers skiing for intermediate and expert skiers. There are dozens of ski lifts and cableways available to reach runs some as long as 12 kilometres/7 miles. The slopes near Wengen suit beginners and those near Murren are the region’s most challenging. The Schilthorn is known for its hair-raising black-diamond Inferno run, the world's biggest amateur ski race. Grindelwald caters to snow boarders and freestyle super pipe enthusiasts.

Gstaad has a reputation for celebrity-spotting but also offers plenty of excellent skiing in the 10 villages that make up the area. There are a total of 220 kilometres/135 miles of slopes. Glaciers guarantee skiing from late October through early May.