Turkey: Things to do

Every country has its outstanding and special attractions. Goway has selected its top 13 things to do in Turkey (not in any particular order) for you to enjoy on your visit to this destination. 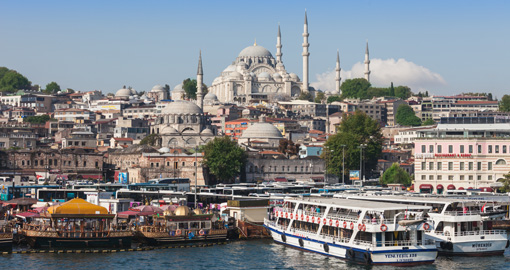 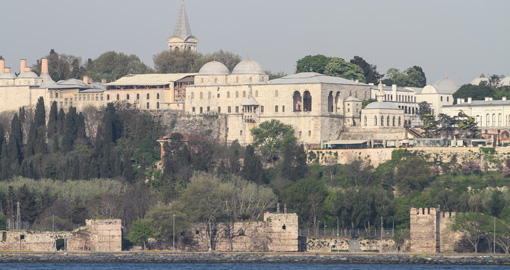 The Topkapi Palace is a large museum which once was the main residence of the Ottoman sultans. The palace was extended over the centuries and today, it needs at least half a day to do it justice on Turkey vacations. At the end of the Ottoman Empire in 1923, Topkapi became a museum. This rectangular-shaped complex consists of 4 main courtyards and a number of smaller buildings. The palace complex has hundreds of rooms and chambers, but only the most important are open to the public. It is a series of pavillions, kitchens, barracks, audience chambers and sleeping quarters built around a central enclosure. The museum collection also includes Ottoman clothing, weapons, armour, miniatures, religious relics and manuscripts. There are fantastic panoramic views of the city and the Bosphorus from the gardens. 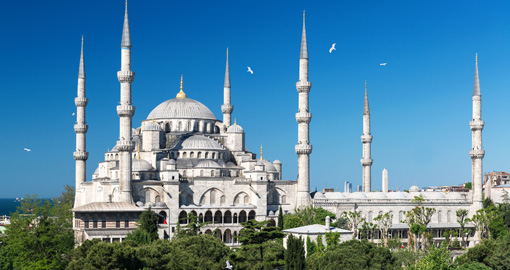 The enormous and imposing Blue Mosque is so called because of the blue tiles surrounding the walls of the interior. Built in the first part of the 17th Century, it is an active mosque but totally open to visitors except during daily prayers for half an hour each time. It contains the tomb of the Sultan Ahmet who authorized the construction of the Blue Mosque. The exterior is very photogenic with its domes and six minarets. 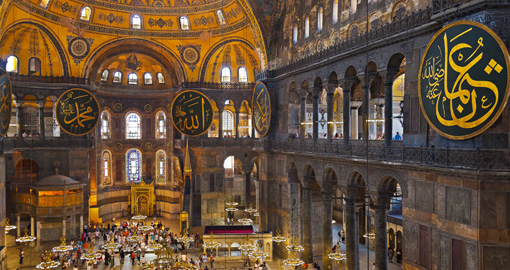 Situated next door to the Blue Mosque, the Hagia Sofia was built in the 6th Century AD as a Christian church and was later turned into a mosque. Today it is a museum. The name Hagia Sophia means Holy Wisdom in Greek. It is also considered a masterpiece of Byzantine architecture with a large central dome. It is said to have "changed the history of architecture" and was the world's largest cathedral for 1000 years until the Seville Cathedral was completed in 1520. It took a force of 10,000 workers to build in almost six years.

The Church of the Holy Saviour in Chora was a medieval Byzantine Greek Orthodox church but now is the Chora Museum. In the 16th Century, during the Ottoman era, the church was converted into a mosque eventually becoming a museum in 1948. The interior is covered with some of the oldest and greatest surviving Byzantine mosaics and frescoes which were uncovered and restored once the building became a museum. Most of the interior mosaics depict the lives of Christ and the Virgin Mary. On the dome is a stunning depiction of Jesus and his ancestors. A side chapel is decorated with frescos that deal with the themes of death and resurrection, depicting scenes taken from the Old Testament. 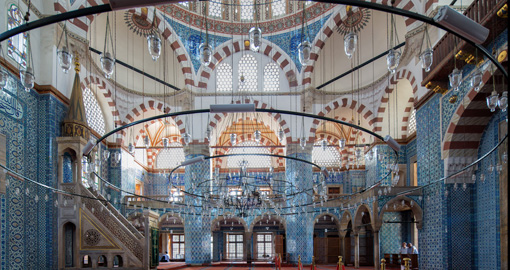 The Suleiman Mosque in Istanbul is a huge edifice which sits on top of a hill overlooking the city and the Bosphorus. It is not the largest of Istanbul’s mosques but it is, architecturally, the most beautiful you will see on a Turkey vacation. The mosque and its surrounding buildings were designed by the most famous and talented of all of Turkey’s architects and were built in the mid-16th Century. There is an attractive garden with a large fountain which has great views over the city. There are also 4 minarets, all with beautiful balconies. The interior is quite stunning but simple with fine tiles, wonderful stained-glass windows, a spectacular colourful carpet and medallions featuring fine calligraphy. Check out the streets surrounding the mosque with their timbered houses and historic Ottoman buildings. 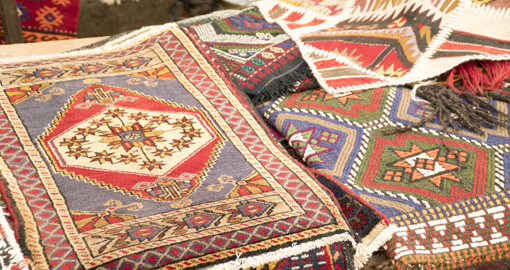 The Grand Bazaar is one of the largest and oldest covered markets in the world. It is spread out over 61 covered streets and has more than 4,000 shops and is often regarded as one of the first shopping malls in the world. Today, it employs 26,000 people and is one of the major landmarks in Istanbul, open daily except Sundays and holidays. Be sure to look through doorways to discover hidden stores and wander down narrow lanes to watch artisans at work. When actually shopping, it is usual to drink lots of tea, compare prices and try your hand at bargaining. 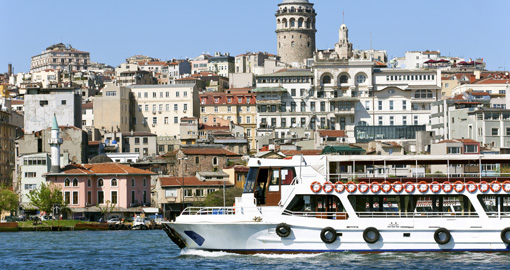 If you do nothing else in Istanbul on a Turkey vacation, take a cruise on the Bosphorus, a stretch of water which separates Europe from Asia. The cruise will sail along both sides and depending on which cruise you take, can travel as far as the Black Sea, 32 kilometres/20 miles away from Istanbul which takes 90 minutes each way. It is recommended to stop off at one of the small towns along the way, maybe have lunch in one of the many fish restaurants and then take a later boat back to Istanbul. On this cruise, you will see many outstanding sights. 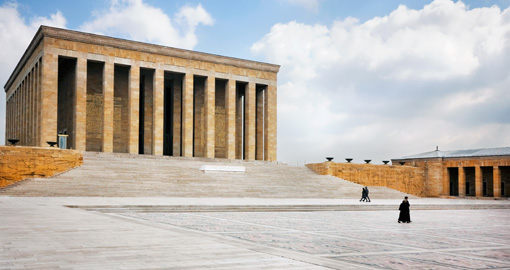 Also known as Anıtkabir, this is an imposing mausoleum of Mustafa Kemal Ataturk in Ankara, Turkey’s capital, the founder of the Republic of Turkey, completed in 1953. He died in 1938. Inside is a large collection of Ataturk memorabilia and artifacts. Turks have a large respect for Ataturk and millions visit the mausoleum each year. Anıtkabir literally means "memorial tomb. It is also the site of the final resting place of İsmet İnonu, the second President of Turkey. In addition to the mausoleum, there are an extensive museum and exhibition rooms displaying Ataturk's state carriages and cars. 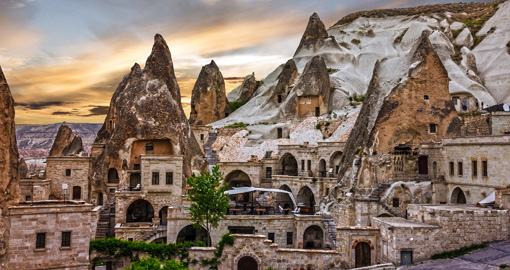 Cappadocia is a very unusual area which can be described as a wonder of nature with its fantastic landscapes and underground features. The fresco-adorned rock-cut churches, the Goreme Open-Air Museum, the country’s largest open-air museum and the subterranean refuges are the most famous sights. There are cave houses, fairytale chimneys, underground cities and long deep gorges once used by Christians fleeing Roman soldiers. You can stay in a cave hotel hewn out of rock and you can try an early morning hot-air balloon trip to observe this unique landscape. 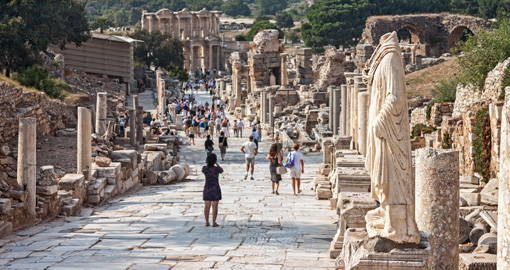 Ephesus is an archaeological site which was an ancient Greek city when built in the 10th Century BC. It was famous for the nearby Temple of Artemis, one of the Seven Wonders of the Ancient World. However, it came under the control of the Roman Empire in 129 BC. Ephesus was one of the seven churches of Asia that are cited in the Book of Revelation and the Gospel of John may have been written here. Today, after many destructions and an earthquake, it is one of the largest Roman archaeological sites in the eastern Mediterranean to be experienced on Turkey vacations. The ruins still give an idea of the city's original splendour. These consist of the theatre which seated 25,000 people, the largest in the ancient world, the Library of Celsus, the agora (marketplace), the Temple of Hadrian, the Odeon, Terrace Houses where the wealthy lived during the Roman period and a number of bath complexes. 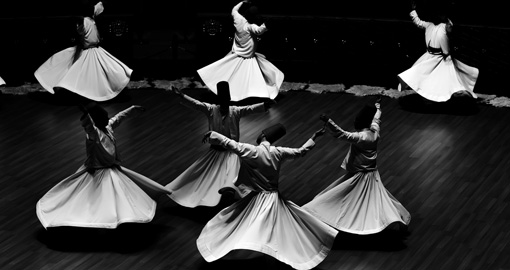 The main reason to come to Konya on a Turkey vacation is to visit the Mevlana Museum, the former lodge of the Whirling Dervishes. These were members of a Muslim religious order who have taken vows of poverty and austerity. Dervishes first appeared in the 12th Century and were noted for their wild rituals such as dancing, whirling, or howling. It is one of the biggest pilgrimage centres in Turkey and for Muslims, it is a very holy place with its dome of turquoise tiles. Inside, you can see Mevlana's Tomb flanked by that of his son Sultan Veled and other eminent dervishes. They are all covered in velvet shrouds with gold embroidery. Those of Mevlana and Veled have huge turbans, symbols of spiritual authority. There is a small mosque which contains exhibits such as musical instruments, the original copy of Mevlana's prayer rug and a 9th Century Christian manuscript. There is also a casket containing strands of Mohammed's beard. The nearby Konya Archaeological Museum has sarcophagi and other antiquities from the ancient city of Catalhoyuk. Other exhibits are from the Neolithic, Bronze Age, Iron Age and the Roman and Byzantine periods. 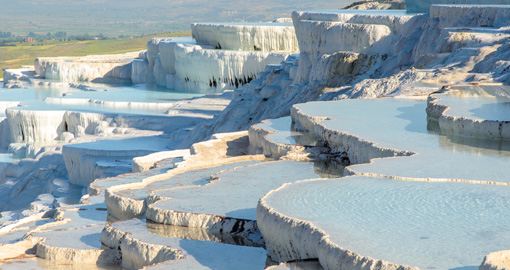 Pammukale has hot springs with a very high mineral content which form calcium and limestone pools and cascades. Dripping slowly down the vast mountainside, mineral-rich waters foam and collect in terraces, spilling over cascades of stalactites into milky pools below. Pamukkale means "cotton castle" in Turkish. What you see is a set of unusual calcium cliff bathing pools overlooking the town. These petrified waterfalls are a UNESCO World Heritage site. Nearby is the ancient Greco-Roman city of Hierapolis.

The Beach Resorts of Turkey

A wonderful way to end a visit to Turkey might well be a short stay at one of the excellent beach resorts along the Mediterranean or Aegean coastlines. The best known is Antalya, known as “The Pearl of the Mediterranean” with its endless beaches and golf courses. Belek is Turkey's premier golf resort. The setting is spectacular with long, golden sandy beaches and a backdrop of mountains. Bodrum is known for its natural beauty, magnificent coves and its modern nightlife. Marmaris has a rich cultural heritage, magnificent natural surroundings, several modern marinas, many coves along the coast and a natural harbour. Fethiye is one of the best sites for paragliding and water sports as well as magnificent bays and long sandy beaches. Kusadasi is an ancient port city offering a mixture of sea, sun and unspoilt beaches. There are other resorts that can be considered on Turkey vacations.