Venture into the jungles of Volcanoes National Park to see Mountain Gorilla families up close and personal on this Rwanda vacation. When you're not trekking through the jungle, you'll stay at the exclusive and luxurious Bisate Lodge, which sits on the edge of an eroded volcano and offers incredible views of the mountain range. 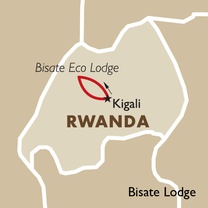 This 3-day Rwanda vacation takes you to a gorgeous safari lodge located on the natural amphitheatre of an eroded volcano.

Your Rwanda vacation begins in Kigali, where you can take a city tour and head to the Genocide Museum to learn about the country's tragic history and reconciliation. From Kigali, you'll pass through Rwanda's stunning countryside en route to Bisate Lodge, an exclusive wilderness lodge with six gorgeous suites offering incredible views of the jungle and impeccable service. Bisate Lodge is located close to the volcanic mountains of Volcanoes National Park, including Karisimbi, Bisoke, and Mikeno. While you savour the tasteful design of the lodge or relax with a complimentary in-room massage, you'll enjoy spectacular views of this mountain range.

While at Bisate Lodge, you'll head on a Gorilla Trek into the heart of Volcanoes National Park. In the company of an expert guide, you'll traverse high-altitude terrain in search of the critically endangered Mountain Gorilla. When you meet these massive primates, you'll enter a small echelon of Globetrotters who have witnessed these incredible mammals in the wild. Bisate Lodge is dedicated to positively impacting the gorilla population through education and eco-friendly initiatives. By staying with Bisate Lodge and journeying to the home of these gorillas, you'll join in the fight to cherish and save these brilliant animals.

On arrival at Kigali Airport, you will be met by a Goway representative and then depart for Bisate Lodge, driving through the beautiful countryside. Arrive at your accommodation with the rest of the day spent at leisure. Perhaps take advantage of the complimentary in-room welcome massage (any additional massages would be for guests own account).

Arrival into Kigali should be no later than 3:00pm for the transfer to Bisate Lodge. Depending on arrival time into Kigali, the Kigali City Tour and Genocide Museum visit will be done en-route.

This morning you will be collected and taken to the gorilla trekking base for your first trekking experience. An early morning transfer to trek into the forest, led by experienced trackers will bring you amongst a family of Mountain Gorillas. These massive primates are extremely rare. You will get within metres of the family, and be privileged to spend time amongst them. Returning to your hotel for a late lunch. The trekking may be fairly strenuous; up to six hours or longer is not uncommon, at relatively high altitude. Please refer on the information sheet. Mountain Gorillas are wild animals, as such sightings cannot be guaranteed, however the success rate is well over 90%.

After breakfast , you will be met at Reception by a representative and transferred to Kigali Airport for your departure flight.

Please do not book any departing flights before 2:00pm out of Kigali.