DELUXE | PRIVATE: Explore the ancient and medieval wonders of Cairo while also delving into its rich culinary heritage on this week-long Egyptian vacation. See the pyramids, tour the avenues of Old Cairo, and barter in Khan el-Khalili in between a cooking class, dance show, and food tour through the capital. 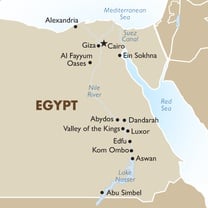 This 7-day Egyptian vacation explores the food and history of Cairo. It features deluxe accommodations and private tours.

Your trip to Egypt showcases the Egyptian capital, the largest city in the Middle East and one of the great centres of world culture. On your first full day, you’ll discover the city’s medieval heritage, moving through the district of Old Cairo to see the landmarks of the city’s cultural diversity, including the Coptic Museum and the Ben Ezra Synagogue. The next day, travel back in time to the age of the pharaohs with a full-day tour of the pyramids. Explore Cheops Pyramid, also known as the Great Pyramid of Giza, before admiring the mysterious face of the Sphine. Continue to the ancient capital, Memphis, to see Menes’ white-walled palace, and close out your tour at Sakkara, where you’ll visit the oldest pyramid in the nation, the step pyramid of King Zoser.

Another day, join a walking food tour through the historic streets around Tahrir Square to discover Egyptian classics. You'll visit various restaurants to try Egyptian treats such as kushari and baklava. Later that day, head to the palace of Wekalet el-Ghouri to enjoy an Egyptian Folk Dance Show, which culminates in a performance by a Whirling Dervish. Turn back to Egypt’s past the following day with a visit to the Egyptian Museum. Explore the corridors of this massive museum and see ancient artifacts, including treasures from the tomb of King Tutankhamun. That evening, wind through the old gates of Cario to explore Al Moez Street, home to some of the city’s most important Islamic monuments. Complete your visit at Khan el-Khalili, the greatest marketplace in the Middle East, where you can barter for spices, textiles, and a variety of souvenirs. Closeout your time in Egypt with a half-day cooking class, during which you’ll learn to make authentic Egyptian dishes and sample your creations at the end of the class.

At the end of your stay in Cairo, you’ll head to the airport to connect to your next destination or return home.

The Cairo Marriott Hotel and Omar Khayyam Casino is the perfect destination for weekend getaways, vacations and business travel. The hotel is actually situated on an island in the middle of the Nile River which is connected to the mainland. A stay at this 5-star hotel in Cairo ensures that you will enjoy all that Cairo has to offer. Nearby attractions include Pyramids of Giza, Khan el Khalili, Egyptian Museum of Antiquities and Cairo Opera House. Unwind at the hotel's pool which is one of the largest pools in the city or enjoy a drink at Cafe Promenade. The hotel is in close proximity to the Giza Pyramids, 'old' Cairo center, Egyptian Museum, Cairo Zoo and the opera house.

Old Cairo is the eldest district in the Egyptian capital; which was formerly the City of Phas built by Amr Ibn ElAas. In later centuries, Romans built the fortress Babylon in the area, remnants of which still exist. Later, Old Cairo became the center of Christianity in Egypt, with as many as 20 churches built within an area of one square mile. Only five of these historic churches remain today.

The Coptic Museum was founded in 1910 by Marcus Simaika Pasha, and is the most recently built of Cairo's major museums. The museum is home to one of the richest collections of Coptic Christian art in the world, featuring antiquities of the Coptic period (300-1000 AD). Around 16,000 pieces are displayed in the museum, arranged where possible in a chronological order.

The Ben Ezra Synagogue, located in Cairo center, was built by chief rabbi in Jerusalem Abraham Ben Ezra in the late 9th century within the walls of the Fortress of Babylon (as Old Cairo was known in ancient times). The basilica style temple is home to a Jewish heritage library, which includes a Torah on gazelle skin dating back to the fifth century BC. The synagogue is known principally for its storeroom, or Geniza, which housed a rich store of political, economic, and social books and manuscripts about the condition of Jews under Arab rule in Egypt in the Middle Ages.

Today you will be taken on a full day tour that will first take you to the Pyramids and Sphinx which were reckoned by the Greeks to be one of the seven wonders of the world. A single pyramid is built of 2,300,000 blocks, each weighing an average Of two and one-half tons. In the face of such immensity, one cannot help but feel the wonder and awe that so many writers &amp; artists have sought to convey over the centuries. The Cheops Pyramid is especially interesting since its interior burial chambers are open for inspection by the public. Not far from the Pyramids is the Great Sphinx of Giza, which dates from the time of Chephren(2620BC).

Hewn from natural yellowish limestone; standing 65 feet high and 187 feet long, this unforgettable statue combines the head of a Pharaoh with a lion's body. You will then head off to Memphis which served as the capital of Upper and Lower Egypt some 5,000 years ago during the 1st Dynasty. Menes, the first pharaoh of this dynasty, built a great white-walled palace &amp; the Temple of Ptah here. Then onto Sakkara one of the most exciting historical and archaeological area in all of Egypt is Sakkara , situated about 12 miles South West of Cairo. The site is dominated by the famous step pyramid of King Zoser. It was the first pyramid to be built in ancient Egypt, preceding those at Giza by many centuries and is the work of the famous pharaonic architect, Imhotep. You will have the opportunity to stop for lunch at a local spot during the day.

Today your food discovery tour begins at the historic Tahrir Square and continues through the Haussman-inspired streets of Downtown Cairo. There will be four stops for different foods and drinks, where you will discover more about Egyptian food and history. You'll try a variety of different food including kushari (a popular Egyptian dish with pasta, rice and lentils), fresh juices and local baklava during this two hour tour. Make sure you're hungry when you start as you'll be very full by the end!

Experience one of the best folkloric shows in Egypt at Wekalet El-Ghouri which is an Egyptian Heritage historic place built by the Mameluke Sultan Qonsowa al-Ghouri in 1504 A.D. Located in Central Cairo, the palace has come to be one of the most well-known sites in Cairo Day Tours. Under the supervision of the Ministry of Culture, the Tannoura Egyptian Folk Dance Show in Cairo takes place in a very large open-air Theater every Monday, Wednesday, and Saturday for 1 hour of a spectacular dance show, which began in February 1988. Selections of Folkloric music will be played by local Egyptian musicians, previewing Egypt's musical heritage. Then comes The Tanoura Dance show and lastly they end it with a very special spiritual Whirling Dervish (Darwish) performing. After the show ends, you will be transferred to your hotel.

The Egyptian museum was built during the reign of Khedive Abbass Helmi II in 1897, and opened its doors on November 15th, 1902. Today, the museum contains the most important collection of Egyptian antiquities in the world. Exhibited are over 120,000 objects from the Pharaonic and Graeco Roman periods, including the celebrated mummies of ancient Egyptian kings and the treasures of King Tut Ankh Amun. A special 'Hidden Treasures' exhibit in the museum's redesigned basement features more than 150 artifacts on display for the first time.

Half Day Cairo by Night and Khan Khalili Bazaar

Tonight you will enjoy a medieval atmosphere while walking through the old gates of Cairo into Al Moez Street, one of the oldest streets in the city. At one kilometer in length, a United Nations study found it to have the greatest concentration of medieval architectural treasures in the Islamic world. In 2008, the street was dedicated as a pedestrian only zone between 8am - 11pm. Stroll along Al Moez with your guide as you take in its heritage of mausoleums, mosques, palaces and schools dating from Fatimid, Ayyubid, Mamluke and Ottoman Eras (without entering the mosques as they are closed after 5 pm). Lastly, no visit to Cairo is complete without a stop at the Khan El-Khalili bazaar, where you will be transported back in time to an old Arab souk. Shop owners calling you to their stalls, the scent of spices, the hustle and bustle of trade, and the many beautiful objects that can be purchased will have you lost among alleys for hours. Put your haggling skills to the test when buying statuettes, spices, souvenirs, silver jewelry, t-shirts, galabiyyas, belly dancing costumes, or anything for that matter. When your shopping's done, don't miss out on a traditional cup of tea at the famous Fishawi's cafe before being transferred back to your hotel.

If you're looking for something beyond the typical tourist sites in Cairo, this cooking class is highly recommended. This class offers guests the chance to try their hand at cooking authentic Egyptian food as well as other Middle Eastern dishes. With hands-on instruction, recipes to take home, and of course a chance to sample your dishes, this tour is sure to tantalize your taste buds.