DELUXE | PRIVATE-GUIDED: Tour the world of Ancient Egypt while staying in a luxury hotel in Cairo, with the pyramids of Giza as your backdrop. Explore Cairo’s pyramids, Memphis, and the Great Sphinx before embarking on a Nile cruise to see the temples of Luxor, Edfu, and Aswan. 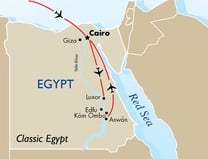 This 9-day Egypt Stay of Distinction takes you to a luxury hotel in Cairo before you embark on a Nile cruise to Luxor and Aswan.

Your Egypt vacation begins in Cairo, where you’ll stay at the luxurious Mena House, one of Goway’s Stays of Distinction. This 5-star hotel sits around 20 minutes outside downtown Cairo on a 40-acre property opposite the pyramids. Stay in a luxury room made up with an ornate Arabesque style with a marble bathroom and a balcony with incredible views of the pyramids. Tee up on the 18-hole golf course or try your luck at the on-site casino. Dine on incredible gourmet dishes at the restaurant or watch the sunset hit the pyramids with a cocktail in the bar.

During your time in Cairo, you’ll tour the world of Ancient Egypt. Head to the Great Pyramid of Giza, built between 2,560B.C. and 2,540B.C. and the oldest of the Seven Wonders of the Ancient World. Explore the surrounding necropolis, home to the pyramids of Khafre and Menkaure, the Great Sphinx, and numerous cemeteries and tombs. You’ll also head to the ancient capital of Memphis and Sakkara, the famed “City of the Dead.”

Fly to Luxor to begin your unforgettable 5-day cruise up the Nile aboard the luxury Oberoi Philae. Explore the wonders of Upper Egypt, including the Valley of the Kings, where pharaohs like King Tutankhamen were entombed thousands of years ago. Visit the ruins of ancient Thebes and see the incredible temples of Luxor and Karnak.

Continue to Edfu to see the Temple of Horus, perhaps the best-preserved temple in all of Egypt. See the nearby Temple of Sobek, one half of a distinct double temple. Admire the temple’s artworks honouring the crocodile god and see the 300 mummified crocodiles displayed in the temple’s Crocodile Museum. Head to the Aswan High Dam, which changed Egyptian agriculture forever when it was built in 1970, allowing the government to control the annual flooding of the Nile. Afterwards, sail around Elephantine Island before flying back to Cairo. Alternately, consider adding an excursion to Abu Simbel, home to the famous temple of Ramses II.

Back in Cairo, explore the city proper. Head to the Egyptian Museum on Tahrir Square, which houses the world’s finest collection of Ancient Egyptian antiques, which holds around 120,000 items. Pass through Islamic Cairo to see the spectacular Citadel and the Mosque of Sultan Hassan. Then try out your bargaining abilities at Khan el Khalili Bazaar, before heading to the airport to bid farewell to the land of the pharaohs.

Cairo, the Triumphant City, is the glorious capital of Egypt, the cradle of civilization and the beacon of religion. It is the largest city in the Middle East and Africa, and lies at the centre of all routes leading to and from the continents of Asia, Africa and Europe. Greater Cairo extends on the banks of the River Nile to the south of its delta. Here the Nile divides into two tributaries, the Rosetta and the Damietta. It is the city where the past and present meet. On its East Side stands the evidence of 2000 years of Islamic, Christian Coptic and Jewish culture still flourishing to this day. On its West Side lies the Ancient Egyptian city of Memphis (Giza), the renowned capital of the Old Kingdom and the site of the Pyramids, the only wonder of the Seven Ancient Wonders of the World surviving. Indeed, a journey through Cairo is a journey through time, a journey through the history of an immortal civilization.

Today, you will visit Cheops' Pyramid, one of the Seven Wonders of the World, and the Sphinx, the great god-lion sentinel. Built over 35 centuries ago, the towering pyramids were erected to preserve bodies and treasures for afterlife. You'll continue on to Memphis, the first capital of ancient Egypt, and Sakkara, the ''City of the Dead'', to see the step pyramid of King Zoser and the Wall of Cobras.

Today, you will transfer to Cairo Airport for your flight to Luxor. Upon arrival, you will be transferred to your ship, your floating hotel for the next 5 days as you cruise up the Nile. This morning, cross the Nile to Luxor's West Bank where you will explore the astonishing and extensive New Kingdom city of "Thebes". Sightseeing includes the Valley of the Kings and Queens, the Colossi of Memnon and two huge seated statues of Amenhotep III. After lunch, visit the Luxor and Karnak Temples, a holy city of pylons, hypostyle halls, colossal statues and obelisks built over many centuries, dedicated to the God Amon Ra, his consort Mut and their son Khonsu.

Luxor is a city often been called "world's greatest open air museum", with the number and preservation of monuments in the area, it is unparalleled to anywhere in the world. Luxor is actually composed of three different areas: the city of Luxor - located on the east side of the Nile, the town of Karnak, located just north of Luxor, and Thebes which is on the west side of the Nile across from Luxor.

Early in the morning sail to Edfu via Esna lock. The small town of Edfu is situated on the west bank of the Nile, 56 km south of Esna and 105 km north of Aswan. Today, Edfu is an important centre for sugar production and pottery making. The site of Edfu was known as Wetjetser hor (classical name Apollinopolos Magna), the place where the god Horus was worshipped and the ancient mythological battle between Horus and his traditional enemy, Seth, took place.

An exhilarating carriage ride takes you through town to the Temple of Horus, the Falcon God. Continue sailing to Kom Ombo to visit the Graeco Roman style Temple of Sobek. Standing serenely on a hilltop, the site offers an incredible view over the Nile.

The main monument at Edfu is the Ptolemaic Temple of Horus on the edge of the town. The temple is perhaps the best preserved in all of Egypt and ranks second behind Karnak, simply because of its immense size. At the temple's entrance stand two large black granite statues of Horus who is depicted as a falcon. The elaborate carvings on the walls of the temple are beautiful as if carved just yesterday. Inside the temple is a small sanctuary where the priests of the day offered the best parts of the animals to the gods.

Kom Ombo is located on a bend in the Nile River about 50 km north of Aswan. Located on the east bank, Kom Ombo is home to an unusual double Temple of Sobek built during the Ptolemaic and Roman periods. The temple is dedicated to the crocodile god Sobek and the falcon god Haroeris (Horus the Elder). Despite being badly damaged, the temple is a beautiful sight as you approach from either direction on the river, particularly as sunset nears and the colours change.

This morning's sightseeing includes Aswan's High Dam, the ancient Granite Quarries and the Temple of Philae. After lunch, sail around Elephantine Island and the Botanical Gardens.

Today you will visit the Egyptian Museum, the most important depository of Egyptian antiquities anywhere in the world. It features artifacts from the Pharaonic and Graeco Roman periods, including the celebrated treasures of King Tutankhamun's and many others.

Next, you will visit the Citadel which is situated on a spur of the Muqattam Hills and dominates Cairo's skyline. This was the nerve center of the city and all of Egypt for almost 700 years. Its construction was initiated in 1176 by Saladin and completed by Muhammad Ali. Mameluke sultans and Turkish governors later on made it their residence, building palaces and mosques within the Citadel walls. Facing the Citadel is the Mosque of Sultan Hassan, built between 1356 and 1363 and perhaps the most majestic monument of Arab architecture in Egypt.

This morning, after breakfast, you will be transferred to Cairo Airport for your departure flight.