FIRST-CLASS | SMALL GROUP: Embark on a classic tour that gives travellers short on time a superb introduction to Ancient Egypt. Explore the Great Pyramid of Giza, cruise along the Nile from Luxor to Aswan, visiting temples along the way.

Egypt Odyssey | Goway Exclusive! Take in the sights of Ancient Egypt and save on this small group tour. View Special 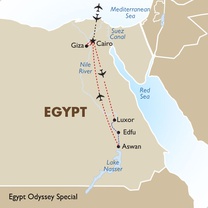 This 9-day Egyptian vacation takes you to Cairo and the pyramids, and on a Nile cruise from Luxor to Aswan. It features deluxe accommodations, small group tours, and is an excellent introduction to the Land of the Pharaohs.

Your journey through Egypt begins in Cairo, the Mother of the World, where you’ll dive head-first into Ancient Egypt with a full-day tour of the pyramids and the Egyptian Museum. First stop is Giza and the Great Pyramid, built between 2,560BC and 2,540BC and the only remaining wonder of the ancient world. Visit the nearby necropolis to see the smaller pyramids of Khafre and Menkaure as well as the Great Sphinx, the enigmatic statue that remains stunning despite lacking a nose. Then head back into town to Tahrir Square to visit the Egyptian Museum, which showcases many of Egypt’s greatest treasures, including artworks, artifacts, and mummies in their burial coffins.

Fly south to Luxor and explore the Temple of Luxor, which its dedications to the god Amun, before boarding the M/S Esplanade, your 5-star river vessel that’ll be your home for the next few nights. See the Temple of Karnak and Luxor’s West Bank, home to the Valley of the Kings and Queens, where you’ll find elaborate tombs of pharaohs, including King Tutankhamun. Admire the Colossi of Memnon before continuing along the Nile to Edfu, where you’ll see the Temple of Horus, widely considered the best-preserved temple in Egypt. In nearby Kom Ombo, you’ll see the Temple of Sobek, built in a dual Greco-Roman style. It’s then onto Aswan, where you’ll tour the High Dam that allows the country to control the annual flooding of the Nile. The Aswan High Dam also creates the world’s largest artificial reservoir, Lake Nasser. Close off your exploration of the Nile with a visit to the Temple of Philae. Then disembark and fly back to Cairo.

In Cairo, you’ll have a full day at leisure to explore on your own. You can journey to Old Cairo to get a glimpse into the various cultural histories of the city. You can visit the Coptic Museum, Ben Ezra Synagogue, or Cairo Citadel and the Mosque of Muhammad Ali. Make sure you also visit Khan el-Khalili Bazaar, one of the most significant bazaars in the Middle East. Barter for some goods and then close out your trip with a delicious meal in one of Cairo’s celebrated restaurants.

At the end of your stay, connect to the airport to return home.

This morning, depart at 09:00 A.M for your full day tour to visit the Pyramids, Sphinx and Egyptian museum.

Pyramids and Sphinx were reckoned by the Greeks to be one of the Seven Wonders of the World. A single pyramid is built of 2,300,000 blocks, each weighing an average of two and one-half tons. In the face of such immensity, one cannot help but feel the wonder and awe that so many writers and artists have sought to convey over the centuries. The Cheops Pyramid is especially interesting since its interior burial chambers are open for inspection by the public. Not far from the Pyramids is the Great Sphinx of Giza, which dates from the time of Chephren (2620BC). Hewn from natural yellowish limestone and standing 65 feet high and 187 feet long, this unforgettable statue combines the head of a Pharaoh with a lion's body.

Karnak was erected in 1928 BC as a small shrine dedicated to Amun, god of Thebes then. The Temple of Karnak comprises three main temples, smaller enclosed temples, and several outer temples - all constructed over 1300 years. The three main temples of Mut, Monthu and Amun, are enclosed in enormous brick walls, with the temple of Amun at the center. Karnak is now the largest.

After breakfast visit the West Bank and the burial ground of the Pharaohs including the Valley of the Kings, Valley of the Queens, the mortuary temple of Hatshepsut and the Colossi of Memnon.

The small town of Edfu is situated on the west bank of the Nile, 56 km south of Esna and 105 km north of Aswan. Today, it is an important centre for sugar production and pottery-making. The site of Edfu was known as Wetjetser-hor (classical name-Apollinopolos Magna), the place where the god Horus was worshipped and where the battle between Horus and his traditional enemy, Seth, in the ancient mythology, took place.

Edfu to Kom Ombo to Aswan

This morning you will visit the wonderfully preserved Temple of Horus at Edfu. The temple is perhaps the best preserved in all of Egypt and ranks second behind Karnak, simply because of its immense size. At the temple's entrance stand two large black granite statues of Horus who is depicted as a falcon. The elaborate carvings on the walls of the temple are beautiful as if carved just yesterday. Inside the temple is a small sanctuary where the priests of the day offered the best parts of the animals to the gods.

Continue sailing to Kom Ombo to visit the Graeco Roman style Temple of Sobek. Standing serenely on a hilltop, the site offers an incredible view over the Nile. Kom Ombo is located on a bend in the Nile River about 50 km north of Aswan. Located on the east bank, Kom Ombo is home to an unusual double Temple of Sobek built during the Ptolemaic and Roman periods. The temple is dedicated to the crocodile god Sobek and the falcon god Haroeris (Horus the Elder). Despite being badly damaged, the temple is a beautiful sight as you approach from either direction on the river, particularly as sunset nears and the colours change.

Today's sightseeing includes Aswan's High Dam and the Temple of Philae. The Old High Dam was built by Sir W. Wilcox on Behalf of the British authorities in 1898. It is constructed of Granite quarried in the Aswan area. The official opening took place in 1902. The Temple of Philae was dismantled and reassembled (on Agilika Island about 500 m from its original home on Philae Island) in the wake of the High Dam. The Temple dedicated to the Goddess Isis, is in a beautiful setting, which has been landscaped to match its original site. Its various shrines and sanctuaries, which include a temple of Hathor, a Birth House and two pylons, celebrate all the deities involved in the Isis and Osiris myth.

Today is at your leisure.

Breakfast at hotel, check out, and transfer to the Cairo International Airport for departure.

Prices are "from" per person based on twin/double share accommodation and for travel in low season. Operates with a minimum of two passengers. Seasonal surcharges and blackout dates may apply. Limited seat/spaces and all pricing is subject to change and availability. Rates for single or triple travellers are available on request - please inquire.