DELUXE | PRIVATE-GUIDED: Combine the ancient wonders of Egypt and Jordan on one convenient vacation. Start in Cairo, where you’ll visit the pyramids and the city’s medieval landmarks. Then explore the banks of the Nile River outside Luxor to see ancient temples and tombs before connecting to Jordan to float in the Dead Sea, tour Petra, and head on a jeep safari in Wadi Rum. 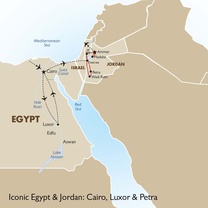 This 12-day Middle Eastern vacation explores Cairo and the temples along the Nile River before connecting to Jordan to see the Dead Sea, Petra, and Wadi Rum. It features deluxe accommodations and private tours.

Your trip to Egypt begins in Cairo, the Egyptian capital and largest city in Africa and the Middle East. Cairo is not only the centre of one of the world’s oldest civilizations, but also the gateway to the wonders of Ancient Egypt. Spend a day exploring the pyramids around Giza, including mighty Cheops Pyramid, known as the Great Pyramid of Giza, which is the only remaining wonder of the ancient world. You’ll also see the enigmatic Sphinx before returning to the city to tour the Egyptian Museum, the world’s greatest collection of ancient Egyptian artifacts. The next day, explore medieval Cairo, weaving through the old streets and visiting mosques and marketplaces to get a sense of the city’s transformation over the past 1000-plus years. During your tour, you’ll pass through the old gates of Al Moez Street and visit Ibn Tulun Mosque, the oldest in all of Cairo.

Continue your Egyptian vacation by connecting south to Luxor, your base for exploring the ancient temples on the banks of the Nile River. Start with tours of Luxor Temple and Karnak Temple, two of the oldest and largest complexes in all of Egypt, renowned for their elaborate statues, obelisks, and wall carvings. Another day, explore the east and west banks of Luxor, known as the Valley of the Kings and Valley of the Queens, to see the tombs of ancient pharaohs Seti I and Tutankhamun, the Colossi of Memnon, and the Temple of Hatshepsut, the only woman to rule Ancient Egypt. Cap off the journey to Egypt with a day trip to the Temple of Denderah to the north of Luxor, one of the best-preserved temples in the nation. Connect back to Cairo for one final night.

Fly on to the Dead Sea to start your trip to Jordan. Spend a morning along the famous salty waters and go for a float before you head to Bethany to see the famous Christian pilgrimage site located where John the Baptist baptized Jesus of Nazareth. Continue to your hotel near Petra for the night and awake early the next morning to explore the famous Red Rose City, one of the most magnificent landmarks on the planet. You’ll wind your way through the Siq and see the famous Treasury as you explore the ancient city. Continue the journey to Wadi Rum, the country’s most famous desert valley and filming location for Lawrence of Arabia and Dune, where you’ll embark on a jeep desert tour. On your final full day in Jordan, you’ll see Mt. Nebo where Moses first gazed upon the Holy land, the churches of Madaba, and the capital Amman, where you’ll spend your final night.

At the end of your Jordan vacation, you’ll connect to the airport for onward travels.

Upon arrival at Cairo International Airport, you will be met by Goway's local representative inside the customs and immigration area holding a signboard with your name on it. After being assisted with immigration formalities, you will be transferred to your hotel. You will be presented with the full documentation required, including domestic airline tickets by your representative when you arrive.

This morning, depart at 09:00 A.M for your full-day tour to visit the Pyramids, Sphinx, and Egyptian museum.

The pyramids and Sphinx were reckoned by the Greeks to be one of the Seven Wonders of the World. A single pyramid is built of 2,300,000 blocks, each weighing an average of two and one-half tons. In the face of such immensity, one cannot help but feel the wonder and awe that so many writers and artists have sought to convey over the centuries. The Cheops Pyramid is especially interesting since its interior burial chambers are open for inspection by the public. Not far from the Pyramids is the Great Sphinx of Giza, which dates from the time of Chephren (2620BC). Hewn from natural yellowish limestone and standing 65 feet high and 187 feet long, this unforgettable statue combines the head of a Pharaoh with a lion's body.

Today you will enjoy a medieval atmosphere while walking through the old gates of Cairo into Al Moez Street with its heritage of mausoleums, mosques, palaces, and schools dating from Fatimid, Ayyubid, Mamluke, and Ottoman Eras. Cross Al Azhar Street to visit the caravansary-like Wekalet el Ghouri, and the Mamluke Style housed of Zeinab Khatoun. Enjoy a lunch stop at Al Azhar Park amid the minarets of Cairo and the Citadel panorama (lunch for your own account). After lunch visits the Ibn Tulun mosque, being the oldest intact mosque standing in Egypt dating to the ninth century and characterized by its unique spiral minaret copied from the mosque of Samarra. Add to your knowledge of Cairo's old houses with a visit to the Next door Gayer Anderson Museum, one of the famous locations where the James Bond film "The Spy Who Loved Me" was shot.

This morning you will be transferred to Cairo Airport for your flight to Luxor. On arrival, you will be met and transferred to your hotel for the next 3 nights. This afternoon, enjoy an unforgettable excursion to Luxor Temple and Karnak Temple where you'll be able to explore the world's oldest temple compound.

Luxor Temple was the center of one of the most important festivals, Opet. Built largely by Amenhotep III and Ramses II, the temple served as a setting for the rituals of the festival, which was held to reconcile the human aspect of the ruler with his divine office. The procession of images of the current royal family began at Karnak and ended at the Luxor Temple.

Karnak Temple was erected in 1928 BC as a small shrine dedicated to Amun, the then god of Thebes. The Temple of Karnak comprises three main temples, smaller enclosed temples, and several outer temples - all constructed over 1300 years. The three main temples of Mut, Monthu, and Amun are enclosed in enormous brick walls, with the temple of Amun at the center. Karnak is now the largest and oldest temple compound on earth.

This morning head across the Nile to the West Bank where some of Egypt's finest treasures are laid out waiting to be discovered.

Visit the Valley of the Kings, which includes the tombs of the Theban rulers, such as Seti I and Tutankhamen. Next, tour the Mortuary Temple of Hatshepsut, the only woman Pharaoh to rule ancient Egypt. Then, you proceed to the Valley of the Queens to visit the burials of some royal consorts and offspring. End the tour with a panoramic stop at the Colossi of Amenhotep III named the Colossi of Memnon by the Greeks.

Today you will be collected from your hotel for your half-day tour to Denderah. Hathor, the ancient Egyptian goddess of love and joy, was what Aphrodite was to the Greeks and Venus to the Romans. It was at Dendarah, some 60kms north of Luxor that the Egyptians worshipped Hathor in a Temple. After touring the temple, return to Luxor where the remainder of your day is at your leisure.

After breakfast, you will be met and transferred to Cairo International Airport in time for your onward flight.

Upon arrival at Amman's Queen Alia airport, you will be met by Goway's local representative in the arrivals hall and transferred to your hotel at the Dead Sea. The rest of your day is at leisure.

The morning will be at leisure to enjoy the Dead Sea until you check out and depart for your visit to Bethany - the place where Jesus Christ was baptized by John the Baptist and a holy pilgrimage site for Christians the world over. Continue on to Petra and check in to your hotel.

After breakfast, you will be driven to the Rose Red city of Petra to a guided tour which will include such main sites as the ''Siq'', a long winding fissure between two walls of overhanging cliffs, the ''Khazneh'', referred to as the Treasury, the Street of Facades, the Court House and the Amphitheatre. After your tour, drive to Wadi Rum, also known as the Valley of the Moon, it is the largest Wadi in Jordan. The area has been used as a background setting in a number of films. Enjoy a 2-hour 4x4 jeep tour inside the desert.

After breakfast, drive to Mt. Nebo, the mountaintop memorial of Moses with captivating views of the Jordan Valley, Dead Sea and River Jordan. Thereafter visit the endless churches of Madaba known as the city of mosaics for the famous mosaic map flooring the Greek Orthodox Church of St. George, the oldest map in the world depicting the Holy Land. Continue to Amman for overnight.

After breakfast, you'll be transferred to Amman Airport for your onward travel.

Prices are "from" per person based on twin/double share accommodation and for travel in low season. Seasonal surcharges may apply. Blackout dates apply from December 10, 2022 to January 10, 2023. Limited seat/spaces and all pricing is subject to change and availability. Rates for single or triple travellers are available on request - please inquire.