DELUXE | PRIVATE-GUIDED: Gain insight into the culture of Morocco as you experience the charm of Marrakech, the spirituality of Fez and the sophistication of Casablanca with deluxe hotels and amazing food. 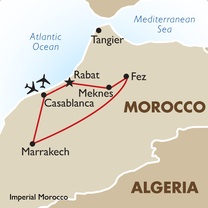 The land of Kasbahs and spice souks has enthralled travellers for centuries. Morocco’s imperial splendour is keenly felt on this 8 day small group (minimum 2, maximum 12) tour on special dates, staying in First or Deluxe accomodations, taking you to its most historic and beautiful cities.

Casablanca is an exotic port city dating back to the 7th century BC. A morning tour takes you to Hassan II Mosque, the second largest in the world. Depart for Rabat, the capital of Morocco. One of CNN’s ‘Top Travel Destinations of 2013’, this imperial city has much to offer a visitor. See the Royal Palace, the Mohammed V Mausoleum, and one of the world’s oldest mosques, the Hassan Tower. Leaving Rabat, you will stop in at one of Morocco’s oldest cities, Meknes and the Roman ruins of Voulibilis.

The spiritual capital of Morocco, Fez will enchant you with its labyrinthine medina. This is also a thriving student town. You’ll visit Quarouiyin University and Mosque, as well as Merdirsa Bouanania, another major Islamic university.

The road to Marrakech is dotted with some wonderfully picturesque towns including Ifrane, noted for its unique architecture, the artist’s haven of Azrou and charming Benni Malal. The city itself is Morocco at its most romantic. A visit to Jemaa El Fna square offers a stunning array of food and performers, including musicians, snake charmers and fortune tellers. You’ll also visit the 12th century Koutoubia Mosque, the Bahia Palace and the Menara Gardens.

Upon arrival in Casablanca, please proceed through customs and immigration formalities. Please collect your baggage and proceed outside where you are met by our representative and start your sightseeing with an excursion around the port city of Casablanca, Morocco's largest metropolis and its industrial hub. Highlights include the old French quarter of Habous, beaches lapped by green-blue water. During your tour you visit the Hassan II Grand Mosque (exterior). The mosque is among the largest in the world and can house as many as 25,000 worshipers. The mosque's minaret is the tallest religious structure in the world. Continue to your hotel for dinner and overnight. (Casablanca visit can be run the day after for late arrivals.)

After breakfast, depart overland towards Rabat, driving along the main highway which links these two major cities. Embark on a brief tour which highlights Rabat's cultural influences and the superbly preserved relics of its Moorish past. Rabat's most famous site is the 12th-century Hassan Tower (an excellent example of the gorgeous Moroccan style), the incomplete minaret of the great mosque built in the beginning of 12th century. Located alongside is the mausoleum dedicated to Mohamed V, the grandfather of the current king. You also enjoy a visit to the Oudaya Kasbah, which is built on a bluff overlooking the Atlantic Ocean. Its gate is one of the most beautiful surviving in the Moorish world, and within its walls you'll explore a delightful Moroccan garden, complete with melodious fountain and sweet-smelling orange trees. At the conclusion of your sightseeing, you continue overland to Fez (approximately a 3 hour drive) and on to your hotel. Dinner and overnight.

Today you take a step back in time to the Middle Ages when you visit one of the most imperial, timeless and untouched cities in the world - Fez El Bali (Old Fez) - the cultural heart of Morocco. You explore some of the 9000 narrow lanes, alleys and souks (open air markets) that make-up the labyrinth of the city's old quarter, originally founded in the 8th century AD. The Imperial capital was a renowned center of medieval learning and at its heart still remains the Karaouine, one of the oldest, still functioning universities in the world. In the neighboring building is the Attarine Mederasa (Koranic college), a jewel of Hispano-Moorish architecture, built in the 14th century. The visit also includes the Nejjarine Square, with its beautiful fountain an elaborate tile-work mosaics, the nearby Fondouq (Caravanserai) converted to a museum of carpentry artifacts. You also visit Fez El Jedid (New Fez), built by the Merinide Dynasty in the 13th century. Here, you see the Royal Palace, mosques, madrasas (Koranic schools), souks and the city wall. Most notably, Fez El Jedid is home to the mellah (Jewish quarter), which provides an interesting insight into Jewish architecture. The wrought iron decorated windows and splendid carved wood balconies of the old mansions are particularly outstanding. The medieval Medina is a UNESCO World Heritage Site. Return to tour hotel for dinner and overnight.

After breakfast, we drive to the ancient Roman city of Volubilis to explore its stunning ruins. Impressive stone arches and columns, some tumbled down and others still standing tall against the vivid blue sky, invite us to take a step back in time. Only about half of the 40-hectare UNESCO site at Volubilis has been excavated. The better-known monuments are in the northern part of the site, farthest from the entrance in the south: The Capitol, dedicated to the Triad of Jupiter, Juno and Minerva, dates to 218AD; the Basilica and 1300 sq. meter Forum are nearby. Here, floors of what were once family dwellings are still covered with decorative tile mosaics depicting mythological beings, such as Orpheus charming animals with his lyre and Hercules performing his legendary 12 labors. That so many of these tiles are still in place and exhibiting their colors after centuries of exposure to the elements, is astonishing.

Next, we will visit the whitewashed town of Moulay Idriss, about 2 miles from Volubilis. It sits astride two green hills in a cradle of mountains, where Morocco's first Arab conquerors settled. Then off to the Imperial city of Meknes, the one-time home of the Moroccan sultanate with its all-winding narrow streets in the medina and grand buildings that warrant it as an imperial city. Remnants of three sets of fortifications, ingeniously incorporated into the city's road networks, emphasize its past importance and glory. The king's tomb sits at the heart of what remains of the original imperial city, flanked by the magnificent Bab el-Mansour. Drive back to Fes for dinner and overnight at the hotel.

Departure to Marrakech passing by the Berber village of Immouzer du Kandar and Ifrane (In case of bad weather in winter time, itinerary can be modified via Meknes, Adaroch passing by farms and of husbandry cows, Mrirert, Khenifra). Optional Lunch and a moment of relaxation in Beni Mellal, one of the agricultural centers of Morocco. Continue to Marrakech for dinner and overnight.

Unearth the secrets of Marrakech, beginning in the medina, the old walled section of town and a UNESCO World Heritage Site. This thousand-year-old city was long a political, economic and cultural center. Marvel at its architectural jewels, including the soaring Koutoubia minaret. Continue to the Bahia Palace, an exemplary specimen of privileged life in the 19th century. Your next stop is at the Tiskiwin Museum (Maison Tiskiwin), which houses an impressive collection of North African arts and crafts. The museum, which was founded by a Dutch anthropologist, is organized into geographically themed exhibits, with each room focusing on artifacts from different towns and regions along the ancient trade route from Marrakech to Timbuktu. The works on display include exquisite hand-woven carpets and textiles, traditional Berber clothing and jewelry, intricate basketwork and tribal handicrafts. Later you visit Djemaa el-Fna, Marrakech's main square, which is filled with orange juice stalls and vendors, along with fire-eaters, mime artists, snake-charmers and street musicians performing at every turn. You may also take the opportunity to explore the city's fabled, labyrinthine souks, their bustling alleyways brimming with all manner of wares. Following your visit, return to your hotel. The remainder of the day is at leisure, a perfect opportunity to freshen up and get ready for a dinner in a local restaurant. Return to your hotel and overnight.

Refresh and enjoy a lovely morning at leisure, or join your Tour Manager for an adventure through Marrakesh's famous stalls of spices, perfumes, carpets, and shoes.

Later, we drive by 4x4 vehicles to serene Lalla Takerkoust Lake with views to the High Atlas Mountains. We pause for refreshments at a lakeside terrace before driving along roads dotted with Berber villages as we reach the rocky Agafay Desert. We continue to our retreat in a secluded desert hideaway overlooking the vast Moroccan wilderness, framed by olive trees and organic gardens. This magical place offering you the opportunity to commune with nature. Toast the sunset before dinner under the starry skies in a Berber tent. Overnight under Berber tent

After breakfast you will be transferred to Casablanca airport for your onward flight.

We recommend that you upgrade and add a national guide for the ultimate experience. Your English speaking driver is not a qualified guide and will give you minimal general information. There are, however, local guides included in Marrakech, Fez and Volubilis.