MODERATE | ESCORTED COACH TOUR: Sample the highlights of Jordan on this incredible journey through the country. Starting in the capital, Amman, you’ll tour the country to float in the Dead Sea, explore ancient Greco-Roman ruins at Jerash, marvel at the majesty of Petra, and experience the iconic desert at Wadi Rum. 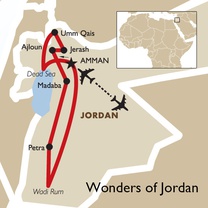 This 8-day Jordan vacation takes you to the most popular sites in the country, including the Dead Sea, Petra, and Wadi Rum.

Your Jordan tour begins in Amman, the nation’s capital and the perfect entry point when travelling to Jordan. Situated in the mountains, Amman is a modern city that’s quickly becoming the most attractive in the region after Dubai and Doha. While the city itself skews modern, it’s located on a significant archaeological site, known as Ain Ghazal. A morning tour will introduce you to the sites, including the Citadel that sits atop Jabal al-Qala’a Hill, the ancient Roman Theatre from the 2nd century, and the Archeology Museum.

After exploring Amman, head to the Dead Sea, the inland lake that’s the lowest geographic point on the planet. Go for a dip and feel the water keep you afloat as the salt and minerals cleanse your skin. Afterwards, continue to Um Qais in the northwestern corner of the country. This ancient historical site offers breathtaking views over the Jordan Valley, the Sea of Galilee, and Golan Heights. If you’ve read the Bible, you’ll also be intrigued to know this is the alleged spot where Jesus cast a legion of demons into a group of pigs.

The next day, explore Jerash, where Hadrian’s Arch signals the border of an ancient Greco-Roman city that was renowned for its wealth and political importance. Visit the site’s ancient theatres, temples, and churches and marvel at the remarkable state of preservation. Continue along to Ajloun, an ancient market town that’s home to a gorgeous 600-year-old mosque with a breathtaking stone minaret. Here you’ll visit the Saracen Castle that has guarded the town from the hilltop for around a thousand years.

You’ll continue your exploration of the past by heading to Madaba the next day. This market town is best known for its Byzantine mosaics, the most noteworthy of which graces the floor of St. George’s Church. In Madaba you’ll also see the oldest existing map of the Holy Land and visit the Mosaic School before heading along to Mt. Nebo. This mountain of rocky outcrops and churches is the apparent site where Moses first laid eyes on the Promised Land. It’s also the site of Moses' death and burial; you’ll visit Moses alleged burial site and enjoy views over the Dead Sea and Israel. Continue to Karak, one of the most famous Crusader castles in all of the Middle East. This castle factored into many significant battles between Saladin and the Crusaders and remains one of the best castles in the region.

Close out your Jordan vacation with the iconic one-two punch of its most famous sites: Petra and Wadi Rum. Petra is the ancient city carved into the walls of a valley in the country’s south. The outer world first discovered it in the 19th century and ever since, its incredible stone-carved temples and antechambers have drawn travellers from all over the world. During a full day visit to Petra, you’ll walk through the Siq, visit the Treasury and Roman Theatre, and see the various courts and temples, such as the Temple of the Winged Lion. The next day pass on to Wadi Rum, the quintessential desert spot in the country. The famous epic movie Lawrence of Arabia used Wadi Rum as a primary filming location. You’ll spend the day exploring this stark desert landscape and learning about the Bedouin tribes that still cross the sand dunes on camelback. You’ll also visit the popular coastal city of Aqaba if you have time before returning to Amman to close out your Jordan tours.

Upon arrival at Amman International Airport, you will be met by a Goway local representative and transferred to your hotel. The complimentary arrival transfer is provided for arrivals between the hours of 8:00am and 8:00pm. For any arrivals outside of these hours, a supplement will apply.

After breakfast and check out, depart Amman, heading to Petra. Enroute visit the Madaba Mosaic Map, covering the floor of the Greek Orthodox Church of St. George. Next, it is on to Mt. Nebo; one of the most revered holy sites of Jordan and the place where Moses was buried. To Um Al Rassas; a UNESCO world heritage site mentioned in both the Old and New Testaments of the Bible. Proceed to visit Makawer; the location of the imprisonment and execution of John the Baptist. Continue to Petra Hotel for dinner &amp; overnight.

Embark on your visit to Petra; capital of the Nabataean Arabs, is one of the most famous archaeological sites in the world. Known as the rose-red city, a name it gets from the wonderful color of the rock from which many of the city's structures were carved. The Nabataeans buried their dead in intricate tombs that were cut out of the mountain sides and the city also had temples, a theater, and following the Roman annexation and later the Byzantine influence, a colonnaded street and churches. In addition to the magnificent remains of the Nabataean city, human settlement and land use for over 10,000 years can be traced in Petra, where great natural, cultural, archaeological and geological features merge. Lunch today is included at Local restaurant.

This morning, after breakfast and check out visit Little Petra "The Siq Al-Barid"; A classical temple that stands guard outside the miniature siq which would appear to have been an important suburb of the city of Petra. Next, proceed to Wadi Rum; a stupendous, timeless place, virtually untouched by humanity and its destructive forces. Enjoy 2-hour 4x4 jeep tour and lunch before returning to Amman via Desert Highway.

Today you will be picked up from your hotel after breakfast for your day of sightseeing. Visit Um Qais; Site of the famous miracle of the Gadarene swine, perched on a splendid hilltop overlooking the Jordan Valley and the Sea of Galilee, and boasts impressive colonnaded streets, vaulted terrace and the ruins of two theatres. Next stop is Ajloun; where you will tour the 12th century Saracen Castle built by one of Saladin's generals in 1184. The last stop for the day is Jerash; one of the ten great Roman cities, the Decapolis League, reveals a fine example of the grand, formal provincial Roman urbanism. Lunch today is included at Local restaurant before returning to Amman.

After breakfast, depart for Azraq Wetland Reserve. This Circular trail starts at the visitor center, with an excellent introduction to the Reserve passing by dry and wet areas to a viewing platform overlooking the artesian pools that once released millions of cubic meters of water into the marshland. Follow the trail forward to new wooden bird hides, passing yet another new water bodies to explore more habitats in the reserve and observe migratory bird species and catch a glimpse of the water buffalo. Then Follow the trail back to the Visitor Center, passing by the largest water body in the reserve. Enjoy lunch at Azraq Lodge's Chechen Kitchen, enjoy exquisite, authentic local cuisine. The kitchen is managed by a local Chechen family who continue to cook their ancestors' tasty homemade recipes. Visitors will quickly succumb to the delicious and traditional delights that they conjure up on a daily basis Lunch at local restaurant. After lunch, head back to Amman Hotel for dinner and overnight.

This morning, drive down to the lowest spot on early and experience floating in the waters of the Dead Sea. You'll have time here for lunch before heading back to Amman for a tour with an artistic twist. Discover the hidden street art in a number of Amman neighborhoods. Learn what each portrayal depicts and get a better understanding of what the painters hope to accomplish. Graffiti is a relatively new art form onto the Amman Street scene, one that has been welcomed and enjoyed. Some of the gems are hidden and you need an expert to help you find them and tell you their stories, enjoy the most famous "Hashem" Restaurant. Of all foods, the kinds here cater to the poor, the middle class and up to the highly famous &amp; rich. It is a food for all, so to speak. His Majesty King Abdullah even ate here along with his family. After enjoying this unique one-time experience, we head onto yet another famous food place; to the well-known "Habiba", where Knafeh would be served, a mix of goat cheese covered with dough on top and sprinkled with syrup leaves one with a memorable taste definitely not to be forgotten throughout the years. We leave "Habiba". Overnight at Amman Hotel.

Transfer to Amman Airport for departure.