FIRST-CLASS | SMALL GROUP: Bring your safari dreams to life on this journey through some of the best safari parks in Africa. Travel throughout Kenya and head on game drives in Samburu, Lake Nakuru, Masai Mara, Tsavo West, and Amboseli to spot elephants, leopards, rhinos, and other beloved animals. 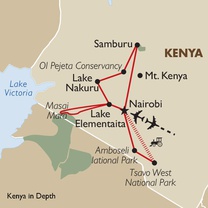 This 13-day Kenyan vacation takes you to some of the best safari parks in the country, including Samburu, Masai Mara, Tsavo West, and Amboseli. It features first-class accommodations and small group tours.

Your journey begins in the capital, Nairobi, one of the continent’s busiest capitals and a place that gives you an unforgettable taste of urban Africa. Your day is at leisure to explore as you see fit, whether that means joining an excursion to the Karen Blixen Museum to learn about the life of the Out of Africa author, or heading to the Giraffe Manor to enjoy high tea alongside friendly giraffes who like to share your snacks by popping their heads in through the open windows. After getting acclimated in Nairobi, head to your first game park, Samburu National Reserve. Located in the country’s north, Samburu is known for its large animal population. Based at Samburu Intrepids Camp for two nights, you’ll head on morning and afternoon game drives to spot ostriches running across the park, gerenuks strolling next to termite mounds and oryx cross the muddy rivers.

Continue along to Ol Pejeta Conservancy, renowned for its rhino conservation program, and former home of Sudan, the last male northern white rhino before his death in 2018. You’ll spend one night here and head on an afternoon game drive to see the large population of black rhinos as well as other members of the Big Five. You’ll also have the option of heading on an evening game drive where you’ll search for nocturnal predators. Next stop is Lake Nakuru, one of the country’s famous soda lakes that has long attracted pink flamingos, which cover the waters of the lake. You’ll also have a chance to spot warthogs and baboons on a game drive before continuing to Lake Elmenteita where you’ll spend the night.

The next day, you’ll reach the most popular park in the country and one of Africa’s most celebrated reserves, the Masai Mara National Reserve. Located in the heart of the Great Rift Valley and one part of the Great Migration of zebra and wildebeest each year, Masai Mara is a place like no other. Stop by a Masai village to learn from these traditional hunters along the plains and take part in local traditions. Continue to Mara Serena Safari Lodge, where you’ll be based for two nights in the park. Spend a full day on morning and afternoon game drives through the expansive reserve, with a break for breakfast alongside a hippo pool. The Masai Mara gives you the best chance of experiencing the quintessential African safari. Spot the Big Five, relax in the shadow of acacia trees, and watch the herds traverse the tranquil grassland.

After savouring the beauty of the Masai Mara, connect back to Nairobi for a night before continuing on to Tsavo West National Park by train. The park is a diverse array of swampland, rocky outcrops, and open plains. Head on an afternoon game drive after arriving in the park and spend the next day exploring its distinct environments in search of red elephants, leopards, and impala. If you’re a birder, you’re also in luck as the park is home to over 500 unique species.

The final spot on your Kenya tour is Amboseli National Park, sitting along the southern border with Tanzania. The park is in the shadow of Mt. Kilimanjaro and so the largest mountain in Africa will serve as the perfect backdrop to your exploration of the park. Spend two nights in the park, heading on game drives during the day to spot the large population of big tusker elephants as well as big cats such as cheetahs and lions.

At the end of your safari, you’ll connect back to Nairobi by train to head to the airport and return home.

On arrival at Jomo Kenyatta Airport, you will be met and assisted by a Goway representative and transferred to your hotel. The rest of your day is at leisure.

Why not take in an optional excursion, a visit to the Daphne Sheldrake Orphanage, Giraffe Manor or Karen Blixen museum.

After breakfast, you will drive north via Nanyuki and Mt Kenya to the Samburu National Reserve. Rugged and remote, this wildlife reserve provides some the best and most colorful game viewing in the country. You will stop for lunch en-route at either Lilly Pond or Trout tree. Enjoy an afternoon game drive as you make your way to your lodge.

You will spend the day in the Samburu National Reserve with morning and afternoon game drives in search of the plentiful wildlife the park has to offer.

After breakfast, check out and drive to your camp situated at the famous Ol Pejeta conservancy, well known for Rhino protection. After lunch at your camp, depart on your afternoon game drive until sunset. This evening, there is the option of a night game drive (at additional cost).

You will have a bush breakfast provided by the camp. After breakfast, you will drive to the nearby Lake Nakuru National Park,one of the Rift Valley soda lakes. The lake's algae attract flamingos that one might have a chance of spotting them line the shores of the lake. Other birds also flourish in the area, as do warthogs, baboons and other large mammals. Black and white rhinos have also been introduced. Nakuru means "Dust or Dusty Place" in the Maasai language. After lunch at Sarova Lion Hill Lodge and a game drive in the park, continue to Lake Elmenteita for your overnight stay.

Drive to the Masai Mara National Reserve offering wonderful scenery and plenty of game. It is perhaps the only region left in Kenya where the visitor may see animals in the same super-abundance as existed a century ago. A Lunch stop is made at Sarova Mara Camp. This afternoon you will visit a traditional Masai Village and get to learn about their culture.

An early wake-up call this morning before you embark on a game drive and later proceed to the appointed site for Hippo pool breakfast. The rest of the morning is at leisure followed by lunch at your lodge. In the afternoon experience another game drive in the Masai Mara National Park.

After breakfast you will be driven to Nairobi, Kenya's colorful capital city. You will be transferred to your hotel or or Jomo Kenyatta Airport for your onward flight. Goway's local representative will reconfirm your onward flight, and assist you at check-in.

Set amongst the lush-green abundance of extensive tropical gardens, looking out over the gentle green avenues of Central Park and commanding a panoramic view over the glittering towers of downtown Nairobi, the Serena Hotel enjoys one of the finest locations in the city.

All rooms are appointed to the highest international standards and have been individually interior designed along pan-African themes.

Onsite there is a Moroccan-styled all-day cafe, The Aksum Bar which offers a broad range of international labels, the al fresco Pool Bar and the Mandhari Restaurant offering Indian Ocean seafood.

After an early breakfast at your hotel, you will be met and transferred to the Railway Station for your train journey to Mtito Andei on board the Madaraka Express departing at 0820 am. You will be met on arrival at approximately 1030 am by a representative from your lodge and transferred to your lodge in Tsavo West National Park. The park is a vast expansion of African savanna with a more diverse array of habitats which include open plains, semi desert scrub, woodland, Chyulu Hills and rock outcrops. Arrive at your lodge in time for lunch. This afternoon, depart on a game drive in the park.

Today is spent in Tsavo West National Park enjoying morning and afternoon game drives. Tsavo West is one of the largest national parks in Kenya and due its vast size it covers a variety of landscapes ranging from swamps, natural springs and rocky peaks to extinct volcanoes, rolling plains and sharp outcrops dusted with greenery. The park has one of the largest populations of Red Elephants in East Africa as well as a diverse variety of wildlife featuring Buffalos, Bushbuck, Elands, Giraffes, Hartebeest, Impala, Leopards, Lions, Oryx, Wildebeest and many more. Over 500 bird species habitat to the area, making Tsavo a bird spotters paradise.

Today enjoy a full day in Amboseli National Park with scheduled morning and afternoon game drives. Amboseli is home to large herds of elephants as well as lions, leopards, cheetahs, buffalo and more.