DELUXE | PRIVATE-GUIDED: Explore the capital of Egypt while staying in a breathtaking luxury hotel across from the pyramids. Based at Mena House, you’ll spend a few days exploring ancient Egypt with visits to the pyramids and the Egyptian Museum, as well as medieval citadels and mosques in Old Cairo. 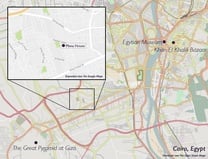 This 4-day Egyptian vacation showcases the nation’s capital. It features deluxe accommodations, shared tours, and is an ideal stay for luxury travellers in Egypt.

Your trip to Egypt takes you to the Mena House, a 5-star, 40ac property with beautiful views of the pyramids. The property used to house a royal hunting lodge and remains a palace fit for a king, with gorgeous Arabesque style, marble bathrooms, and large balconies with unbeatable views of the pyramids. Located around 20min from downtown Cairo, Mena House has an 18-hole golf course, a European-style casino, discotheque, and several on-site restaurants and bars.

During your time at Mena House, you’ll explore Cairo, the largest city in the Middle East and one of the world’s great historical capitals. One day, you’ll spend a full day exploring the pyramids, seeing the Great Pyramid of Giza, the Sphinx, and Memphis, the former capital of Egypt. You’ll also take in the lesser-visited pyramid of King Zosser, the first pyramid built in ancient Egypt. The next day, head to Tahrir Square to visit the Egyptian Museum and see all manner of artworks, artefacts, and mummies, including treasures taken from the Tomb of King Tutankhamun. You’ll also see the treasures of Islamic Egypt, including the Citadel and the Mosque of Sultan Hassan, and barter for rugs, spices, and trinkets at the Khan el Khalili bazaar.

At the end of your stay, head to the airport to connect back home.

This 40-acre property is located opposite the Pyramids and served originally as a royal hunting lodge. A 20-minute drive from downtown Cairo, the hotel is divided into the Palace, the Garden and the Swimming Pool sections. All rooms are in an ornate Arabesque style with balconies and marble bathrooms and the Pyramids hover in the background. Guests can play golf on the 18-hole course in the shadow of these wonderful structures. Facilities of the Mena House include a European-style casino, a discotheque, excellent restaurants and bars.

Today you will be taken on a full day tour that will first take you to the Pyramids and Sphinx which were reckoned by the Greeks to be one of the seven wonders of the world. A single pyramid is built of 2,300,000 blocks, each weighing an average Of two and one-half tons. In the face of such immensity, one cannot help but feel the wonder and awe that so many writers &amp; artists have sought to convey over the centuries. The Cheops Pyramid is especially interesting since its interior burial chambers are open for inspection by the public. Not far from the Pyramids is the Great Sphinx of Giza, which dates from the time of Chephren(2620BC).

Hewn from natural yellowish limestone; standing 65 feet high and 187 feet long, this unforgettable statue combines the head of a Pharaoh with a lion's body. You will then head off to Memphis which served as the capital of Upper and Lower Egypt some 5,000 years ago during the 1st Dynasty. Menes, the first pharaoh of this dynasty, built a great white-walled palace &amp; the Temple of Ptah here. Then onto Sakkara one of the most exciting historical and archaeological area in all of Egypt is Sakkara , situated about 12 miles South West of Cairo. The site is dominated by the famous step pyramid of King Zoser. It was the first pyramid to be built in ancient Egypt, preceding those at Giza by many centuries and is the work of the famous pharaonic architect, Imhotep. You will have the opportunity to stop for lunch at a local spot during the day.

The Citadel situated on a highly visible spur of the Mokattam Hills of Old Cairo, was the nerve center of Egypt for almost 700 years. Construction of the grand structure began in 1176 and was completed by Muhammad Ali Pasha, ruler of Egypt in the late 19th century.

Mamluk sultans and Turkish governors resided in the Citadel, which is among the world's most splendid monuments of medieval warfare. Facing the Citadel is the Mosque of Sultan Hassan, built between 1356 and 1363 and perhaps the most majestic monument of Arab architecture in Egypt and the Mosque of Al Rifai was constructed in two phases over the period between 1869 and 1912, when it was finally completed.

The tour also includes a visit to Khan ElKhalili, known as the Turkish bazaar during the Ottoman period, was built in 1382 by Emir Djaharks ElKhalili, in the heart of what was then Fatimid City. Until this day, the bazaar is a center of trade and communion in the city, and offers a wide array of antiques, handcrafts of gold, silver and copper as well as numerous old coffee shops and local restaurants which attract both Egyptians and tourists alike.