FIRST-CLASS | PRIVATE-GUIDED: Discover the history and charm of the Arabian Peninsula on this journey to the UAE and Oman. Start in Dubai where you’ll discover its futuristic wonders. Continue to Abu Dhabi to see the UAE capital before you connect to Muscat to explore Oman’s desert castles, mountain peaks, and beautiful villages. 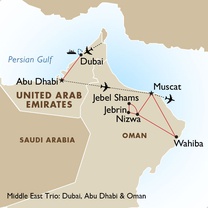 This 14-day Middle Eastern vacation takes across the United Arab Emirates and Oman. It features first-class accommodations and private tours.

Your journey begins in Dubai, the futuristic city that defines the 21st century. A city tour will introduce you to the city landmarks, starting at the Palm Jumeirah, heading to the Gold and Spice Souks, stopping for photos at the Dubai Frame, and ending at the Dubai Mall, one of the world’s largest malls. Another day, head across the desert and into the mountains on a Jeep adventure safari. You’ll swing by Mount Meliha, stop by the Wadi Shawka pools, and go for a hike through the farmland and ruins around Wadi Helo before enjoying a picnic lunch on the East Coast. Back in Dubai, enjoy a morning luxury yacht cruise along the harbour. Admire the Dubai Marina, Blue Water Island, and Dubai Eye from the water as you feast on a delicious breakfast. During the rest of your time in Dubai, be sure to visit the Burj Khalifa, the world’s tallest building, to enjoy the best views of the city from its observation deck.

Connect to Abu Dhabi, the Emirati capital, where you’ll explore the city in the company of a private chauffeur. Drive around town and see landmarks, from Sheikh Zayed Grand Mosque to Emirates Palace. You’ll have another day at leisure to explore the city on your own. Get an adrenaline rush at Ferrari World Abu Dhabi or admire some of the world’s best artwork at the Louvre Abu Dhabi.

Fly into Oman and connect to the capital Muscat, where a morning tour will introduce you to Omani history and several city landmarks, including the Grand Mosque, Bait Al Zubair Museum, the Sultan’s ceremonial palace, Al Alam Palace, and the 16th-century Portuguese fort. After getting settled in Muscat, depart the city in a 4WD and cross the farmland of the Batinah Plain on route to Nizwa. Along the way, you’ll pass through sedimentary mountains in Wadi Bani Auf and stroll alongside the quaint homes of Bilad Sayt, which are built into the rocky slopes themselves.

Spend the night in Nizwa before continuing to Jabrin to following day to see the finest Omani castle from the 17th century. Admire the intricate ceiling paintings and wood carvings before heading into the Al Hajar Mountain range, which peaks with Jebel Shams, the tallest mountain in the country. Continue your journey through the Omani desert and stop off for a swim in the deep-blue pools of Wadi Bani Khalid. Then gaze upon the drifting white sand sea of the Wahiba Sands before turning back to Muscat. Swing by Fins Beach for a swim and the Bimah Sinkhole before you say goodbye to the desert at Wadi Arbayeen and return to Muscat.

After a final night in Muscat, you’ll connect to the airport for onward travels.

Arabian hospitality begins to come alive the moment you enter the portals and enter the welcoming lobby. Warmth meets efficiency as you are made to feel at home instantly. The heritage inspired ambience with cool marble and warm tones of rich wood, invites you to be part of it all. Located in Bur Dubai, next to Dubai Museum and walking distance to the Dubai Creek, Bastakiya Heritage Area, Souk Al Kabeer (Meena Bazaar), Textile Market, Bank Street, Computer Street and Port Rashid. The Spice Market, Gold Souk and Heritage Village are easily accessible via the Abra (water taxi). A short drive of 3 kilometres to Dubai World Trade Centre &amp; Exhibition Halls as well as Sheikh Zayed Road, the business hub of Dubai. Only 6 kilometres from the Dubai International airport. With 173 elegantly furnished rooms in traditional Arabic theme including 23 lavish suites and 41 executive rooms, our central hotel offers all the latest amenities for discerning travellers.

Explore the iconic architecture of Modern Dubai and visit the landmarks around the Dubai Creek in the traditional part of town. From The Palm, Jumeirah to the Gold and Spice Souks, visit all of the must-see sights. There is even built-in time to visit the Dubai Frame observation deck for beautiful photos. The tour ends at The Dubai Mall. After the tour, you will be dropped off at The Dubai Mall where you may enjoy the multiple shopping, dining and entertainment available before you make your own way back to your hotel.

Calling all Adventurers! Explore the wadis and mountain on this true off-road excursion. Your day starts with pick up at your hotel in your Jeep wrangler as you set off on your desert drive to Fossil Rock. Next up, you'll head to Mount Meliha, a small mountain and one of the closest hiking spots to Dubai before continuing on to Wadi Shawka pools. You'll be able to explore the ruins and traditional farmlands near Wadi Helo on an easy hike. Enjoy a picnic lunch on the East Coast before continuing your journey back to Dubai.

See all the top landmarks with this amazing 2 hour luxury Yacht experience. You'll receive a red-carpet welcome upon boarding your vessel and benefit from personal service from your qualified crew. Enjoy all the creature comforts and amenities of the vessel including a dinette area as well as 3 beautifully appointed cabins as you mingle with the other guests. Tuck into a delicious BBQ lunch as you take in Dubai's top sights including Dubai Marina, Blue Water Island, Dubai Eye, Jumeirah Beach, The Palm and Atlantis before returning to the Marina.

A dynamic place to stay, dine, meet and mingle in the heart of Abu Dhabi's destination island. Welcome to Yas Island, Abu Dhabi's top destination island is lapped by calm Gulf waters and basks in daily sun. At the Crowne Plaza Yas Island, you can drop your worries at the entrance to the sociable lobby lounge, and relax away your cares at the nearby Yas Beach, just a short walk away.

Leisure travelers and families have Yas Island's attractions at their feet, from Ferrari World and Yas Waterworld to the shoppers' paradise of Yas Mall. But with a 25-meter outdoor pool, Fitness Center, Kids Club, and five popular restaurants you'll likely not want to leave.

Half Day Private Touring with Chauffeur and Tour Guide

Enjoy the ultimate freedom to explore The UAE your way. This customized excursion offers you the opportunity to visit the sights of your choosing with your private car, chaffuer and professional guide.

Upon arrival at Muscat International Airport you will be met and transferred to the Crowne Plaza Muscat for your overnight stay.

Proceed on a morning tour of the city. Muscat offers the visitor a unique opportunity to witness a modern commercial centre existing in harmony with its traditional culture. With its natural harbour, Muscat means "Anchorage"; lies in a natural volcanic bowl. Our tour of the Grand Mosque (except Friday); Bait Al Zubair Museum (except Friday) is a brief introduction that traces Oman's history and development. Drive along the waterfront Corniche visiting the Fish Market; the colourful Muttrah Souq. We proceed for a photo stop to the magnificent Al Alam Palace, official palace of His Majesty Sultan Qaboos flanked by the 16th century Portuguese forts Mirani; Jalali. (Dress code: Ladies fully covered and to carry a head scarf, men in trousers). Evening at leisure.

This morning depart Muscat by 4WD and visit the fish market and souk in Barka. The drive continues along the Batinah plain. Pass on picturesque wadis to reach the oasis of Nakhl and take the turn off to Wadi Bani Auf. This is a very unique drive through the sedimentary mountains. If you would like there is a wonderful canyon to explore on foot. The route through the mountains is dramatic. Bilad Sayt is one of Oman's most quaint villages with an old world appeal. Explore this tranquil village on foot with its patchwork of terrace farming and traditional houses laid out against the rocky slopes. The route winds through mountains all the way unto the village of Al Hamra characterized by its mud houses and date plantations.

Continue on to Nizwa, boasting its Round Tower Fort, built in the 17th century and its Souq renowned for its Friday cattle auction (only on Fridays) intricately hand-carved "khanjars" (daggers); ornamental silver jewellery (time permitting, alternatively the visit may be moved to day 4 or 5).

Drive past the village of Bahla onto Jabrin. Jabrin, the finest of Oman's castles built in the late 17th century, became a seat of Omani learning. The castle displays the highest achievement in Omani ceiling painting; beautifully executed wood carvings. While heading for Jebel Shams stop at the terrace farming village of Wadi Ghul. Our next stop takes us to Wadi Nakher located in the depth of our deepest canyon. In the Jebel Akhdar range Jebel Shams the highest peak offers a spectacular view.

Proceed to the scenic Wadi Bani Khalid with its deep blue pools of water fringed by the date palms which is an ideal spot to relax or enjoy a refreshing swim. Head for Wahiba Sands, White Sea of sand which are host to a variety of flora and fauna. The ever-changing patterns of the dunes are a photographer's delight.

Visit the fish jetty and dhow factory. Visit the Sanseela Fort. Drive via coastal road to Muscat. Stop at Fins beach for a swim. Our next stop is the Bimah Sinkhole, a spectacular limestone crater with blue green water at the bottom. At Dibab take an adventurous offroad track to visit the Wadi Arbayeen, characterized by date palms and deep pools of water. Proceed to Mazara before returning to Muscat.

After breakfast transfer to Muscat International Airport for your onward journey.