FIRST-CLASS | SMALL GROUP: Experience the greatest natural show on earth with this Tanzanian safari during the Great Migration. Connecting to Tarangire National Park, the Ngorongoro Crater, and both central and northern Serengeti, you’ll stay in first-class game lodges and head on game drives to see over a million wildebeest and hundreds of thousands of zebras and gazelles migrating over the African savannah. 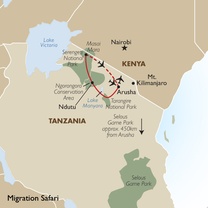 This 9-day Tanzanian safari takes you to the Serengeti in the midst of the Great Migration, the greatest display of animal life on the planet. It features first-class accommodations, small-group tours, and is ideal for travellers on safari for the first time.

Your journey begins in Arusha, the city in the shadow of Mt. Kilimanjaro, where you’ll spend a night before connecting to Tarangire National Park. In the park, you’ll stay at Lemala Mpingo Ridge Lodge, a 4-star property with beautiful views of the Tarangire River off the escarpment. During your time in the park, you’ll have two days to head on game drives to spot the large numers of buffalo, elephants, lions, warthogs, and kudu in the park. From Tarangire, connect to the Ngorongoro Conservation Area, located within the world’s largest inactive volcanic caldera. Staying in one of the nine spacious luxury tents at Lemala Camp Ngorongoro, a seasonal camp within an acacia forest on the rim of the crater, you’ll head on more game drives within the crater that’s densely populated with wildlife, from the Big Five to hippos, Grant’s zebras, and cheetahs.

The grand attraction on your migration safari is Serengeti National Park. Connect into the park and stay at Lemala Ewanjan Camp, a deluxe camp with 10 tents along Makoma Hill in the Central Serengeti. If you happen to visit between April and June or November and January, you’ll witness the Great Migration occurring within the park, where over a million wildebeest and hundreds of thousands of zebras and Thomson’s gazelles pass from the lower reaches of the Serengeti up into the Masai Mara in Kenya and back down, following water and food. You’ll head on game drives to see this overwhelming display of animal life, the greatest natural show on earth. You’ll also see the vast numbers of animals in the world’s most popular game park, from elephants and giraffes to lions and leopards, cheetahs, hyenas, and the adorable serval.

At the end of your stay in the Serengeti, you’ll return to Arusha to connect to your onward destination.

On arrival at Kilimanjaro International Airport, you will be met and assisted by Goway representative. You will then be transferred to your hotel in Arusha arriving in time for check in. Rest of the day at leisure.

Full day will be spent in Tarangire with an extended game drives.

Breakfast at the overnight lodge and this morning commence drive to The Ngorongoro Conservation area. On arrival at the Lemala Ngorongoro Camp, you will collect lunch boxes and immediately commence drive to the floor of the crater for crater tour. Quite possibly the most famous of all Africa's conservation areas, this is one of the places where you stand a good chance of seeing the Big 5. The enduring charm of Ngorongoro stems from its overwhelming physical beauty and the abundance of wildlife permanently resident here. Later you will return to your camp.

Breakfast and check out. Drive to the Serengeti National Park, undoubtedly the most famous wildlife sanctuary in the world, unequalled for its natural beauty and the greatest concentration of plains game anywhere. Arrive for lunch at your camp. Afternoon game drive until sunset.

Full day spent is spent in Serengeti with scheduled morning and late afternoon game drives or clients can opt for a full day game drive with picnic lunch boxes from the camp.

Breakfast at your camp. This morning you will be transferred to your camp with a game drive en-route. Lunch at your camp. Afternoon game viewing drive.

All day spent in the Serengeti or Ndutu with morning and afternoon game drives.