MODERATE | PRIVATE-GUIDED: Spend 3 days in the area made famous by Dian Fossey, the home of the world’s last surviving mountain gorilla population. Be one of only a few to see these gorillas in their own habitat. 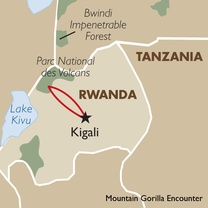 For most travellers, a trip to Rwanda means tracking gorillas. However, only 8 permits are issued each day to visit each of the 10 families habituated for tourists. The trek can be strenuous for many, but the reward is nothing short of transformative. Gorillas are sighted by over 90% of visitors, many of whom will as close as 10 meters to a family.

On arrival you will be met and transferred to Ruhengeri via a Kigali City Tour and Genocide Museum Visit.

After your tour you will be dropped off at the lodge of your choice.

After your trek you will freshen up and depart back to Kigali where you will spend the night at a hotel of your choice.

Today after breakfast, you will be collected from your hotel and transferred to Kigali airport for your flight out as booked by you.

Maximum baggage allowance is 15kg in soft bags only.