DELUXE | PRIVATE-GUIDED: Drive through Rwanda, one of the most picturesque countries in Africa, to Volcanoes National Park. This area made famous by Dian Fossey, is home to the world's last surviving mountain gorilla population. After your trek, return to your luxury accommodations for a well-deserved rest. 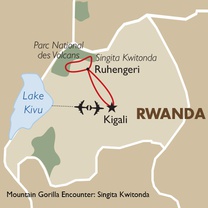 Live one of Africa’s most iconic and unique experiences as you visit a family of wild mountain gorillas. Spend 4 to 5 days exploring Kigali, the capital of Rwanda, enjoying at least one gorilla trek (you may add a second one for an extra charge on the 5-day itinerary).

Begin with an in-depth tour of Kigali, including a sobering but necessary visit to the Genocide Memorial putting Rwanda’s all too recent past into perspective. Then transfer to Ruhengeri, your base for an unforgettable gorilla trek. Only 80 gorilla permits are issued each day, and no more than 8 trekkers are permitted per group. You’ll be matched with travelers of a comparable fitness level and given a full briefing before setting out, and you’ll have to be patient, as it can take several hours of walking to reach the gorillas. Your reward? A life-changing encounter with one of nature’s most gentle and majestic creatures in its natural habitat. If you’re booking the 5-day itinerary, you’ll have the option of embarking on a second trek at additional cost before returning to Kigali.

On arrival you will be met and transferred to your chosen accommodations for overnight. The remainder of the day is at your leisure.

After your tour you will be transferred to Ruhengeri with drop off at your lodge.

Afterwards, return to the lodge where the remainder of the day is at your leisure.