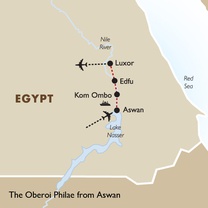 Begin in Aswan, Egypt's sunniest southern city and ancient frontier town which has a distinctively African atmosphere and join your floating hotel for a 4-night cruise. You can stroll up and down the broad Corniche watching the sailboats with their tall masts or sit in floating restaurants listening to Nubian music and eating freshly caught fish. You will have a visit to the Nubian Museum with its three thousand pieces of antiquities, representing various ages - Pharaonic, Roman, Coptic and Islamic. Overnight in Aswan.

The following morning, visit Aswan's High Dam, a huge rock-filled dam which captures the world's longest river, the Nile, in the world's largest artificial reservoir. Also visit the ancient Granite Quarries and the Temple of Philae, a temple dedicated to the goddess Isis.

Sail next to Kom Ombo, located on a bend in the river Nile on the east bank. It is home to an unusual double temple built during the Ptolemaic and Roman periods. The temple is dedicated to the crocodile god Sobek and the falcon god Haroeris.

Sail on to Edfu, a small town and an important centre for sugar production and pottery making. It is the site where the god Horus was worshipped and where the battle between Horus and his traditional enemy, Seth, in ancient mythology, took place.

Next, it’s on to Luxor, a city that has often been called the World's greatest open-air museum. Here, visit the west bank and visit the Necropolis of Thebes, Valley of the Kings and Queens, the Colossi of Memnon, and the Temple of Queen Hatshepsut.

The Valley of the Kings is home to many pharaonic tombs including those of King Tutankhamen and Ramses the Great.

Later visit Luxor Temple on the east bank of the Nile, a holy city of pylons, hypostyle halls, colossal statues and obelisks built over many centuries dedicated to the God Amon-Ra. Stay overnight in Luxor and disembark the next morning.

Today you'll embark your Nile Cruise Ship, your floating hotel for the next 7 days. After lunch on board, a motor boat will take you to visit Nubian Museum.

Situated down river from the First Nile Cataract, Aswan is Egypt's southernmost city. Located at the crossroad of ancient trade routes between Egypt, Africa and India, the town was also a prosperous marketplace, where exotic goods were traded. Aswan stands on the most enchanting part of the Nile, where the desert comes right down to the waters' edge and the river is dotted with islands.

Start your day with a visit Aswan's High Dam, a huge rock filled dam which captures the world's longest river, the Nile, in the world's largest artificial reservoir, Lake Nasser. The dam, known as ''Sadd El-Aali'' in Arabic, was completed in 1970 after 10 years of work. Next it is on to see the Temple of Philae. After your touring, you will sail to Kom Ombo to visit the twin temple of Kom Ombo. One side of the temple is dedicated to the Crocodile God Sobek, God of Fertility and Creator of the World. The other side is dedicated to the Falcon God Haroeis, also known as Horus, the Elder. Continue sailing to Edfu.

This morning you will have a tour of the Edfu Temple, dedicated to the god Horus. The small town of Edfu is situated on the west bank of the Nile, 56 km south of Esna and 105 km north of Aswan. Today, it is an important centre for sugar production and pottery-making. The site of Edfu was known as Wetjetser-hor (classical name-Apollinopolos Magna), the place where the god Horus was worshipped and where the battle between Horus and his traditional enemy, Seth, in the ancient mythology took place. The main monument at Edfu is the Ptolemaic Temple of Horus on the edge of the town. The temple is perhaps the best-preserved in all of Egypt and ranks second behind Karnak, simply because of its immense size, approximately 230 by 400 feet with a pylon measuring over 100 feet high. At the temple's entrance stand two large black granite statues of Horus depicted as a falcon. The elaborate carvings on the walls of the temple are as beautiful as if they were carved just yesterday. Inside the temple is a small sanctuary where the priests of the day offered the best parts of the animals to the gods.

Continue sailing via the Esna Lock to Luxor.

After breakfast on board, you will visit the Valley of the Kings, the Temple of Queen Hatshepsut at El-Deir, El-Bahari and the Colossi Memnon. Luxor is a major attraction for tourists in Egypt. It is considered the world's largest open-air museum with its various temples since the Pharaonic era till the Greco-Roman era, most famous of which is Karnak and Luxor Temples dedicated to the triad of Thebes. The West Bank of Luxor is known for the famous tombs of Seti I, Tut Ankh Amon, Tuthmosis III in the Valley of the Kings and also Queen Hatchepsut's Temple. The Valley of the Kings in Upper Egypt is home to many pharaonic tombs of the New Kingdom, including those of King Tutankhamen and Ramses the Great. Each king's formal name and titles inscribed in his tomb, which is also adorned with his images and statues. Most of the tombs were cut into limestone following a similar pattern: three corridors, an antechamber, and a sunken sarcophagus chamber. The mortuary temple of Queen Hatshepsut of the 18th Dynasty was built just north of the Middle Kingdom temple of Mentuhotep Nebhepetre, amid the bay of cliffs known as Deir El-Bahri. In ancient times the temple was called Djeser-djeseru, meaning the sacred of sacreds. The female pharaoh chose to build her temple in a valley sacred to the Theban Goddess of the west, on a direct axis with the Karnak Temple of Amun on the East Bank.

After lunch visit the Luxor and Karnak Temples, a holy city of pylons (monumental gateways), hypostyle halls, colossal statues, shrines and obelisks built over centuries and dedicated to the God Amon-Ra, his consort Mut and their son Khonsu.

Enjoy breakfast on board as you sail to Quina. Visit the Temple of Dendara, dedicated to Hathor, Goddess of Music, Love and Joy before returning to your ship.

After breakfast, you will visit the Temple of Abydos. Abydos occupies an important place in the religious history of Pharaonic Egypt. By the end of the Old Kingdom, its local god, Osiris, was the most prominent and popular of the Egyptian gods, since he was considered the god of afterlife. According to the popular tradition, Osiris head was buried in Abydos. Here Seti I and his son Ramses II built a beautiful temple in 1300BC. Sail back to Luxor late this morning. This afternoon, enjoy a visit to the Luxor Museum which houses a large collection of tremendously significant objects. These include statues from the famous cachette found buried in Luxor Temple, as well as selection of items from the tomb of Tutankhamon.