DELUXE | RAIL: Join this three day safari on the most luxurious train in the world and experience the splendour of KwaZula-Natal. Take in the 'Big Five' at the private bush retreat of Nambiti Conservancy, and Spionkop battlefields tour with a world class historian. 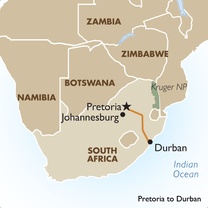 Short but unforgettable, this 3 day journey takes you from South Africa’s favourite seaside resort to its vibrant administrative capital. Experience some of the country’s most historically significant sites including the SpionKop Battlefields, or if you’d prefer, try to spot the Big 5 at SpionKop Game Reserve. Another opportunity awaits at Nambiti Conservancy, a private bush retreat before you pull into Pretoria. A true living gallery of Afrikaner history, this administrative capital is worth stopping a day or two before you depart.

The Pride of Africa departs from Durban Station at 10:00am. You may freshen up in your suite before joining fellow travellers in the midway Lounge car or Observation carriage at the rear of the train. Lunch is served at 1:00pm as the train travels en-route to Lions River Station. At 3:00pm, there will be an excursion to the famous Ardmore Ceramics gallery, including a dressage display and tea. Dinner is served in the dining cars at 7:30pm as the train climbs the escarpment for an overnight stop at Ladysmith.

Durban was once South Africa's busiest port. It is still the country's third largest city and principal port for general cargo, built around a superbly sheltered bay and mile after mile (four in fact) of exquisite beachfront. The bay is the outstanding feature, a vast sweep of water, protected by the Bluff, a low wooded headland. The town is named after Sir Benjamin D'Urban, governor of the Cape Colony from 1842 -1847. The city is the centre of the country's Indian community, most of who are descendants of indentured labourers brought over from India to work on the sugar estates in the 19th century. When their contracts terminated they were given the choice of returning to India or staying on to farm here - most stayed. The city sprawl continues north up the coast, across the Umgeni River, to the resort town of Umhlanga Rocks and inland to the Berea Heights, a range of hills, with wonderful views of the city and surrounds.

Durban has an English seaside feel about it too. Rickshaws on the Marine parade, superb shark protected beaches, a number of museums and cultural sights, the beautiful Botanical gardens are but a few of the city's many charms.
Durban, contrary to popular belief, is not the capital of KwaZulu-Natal (KZN) province, although the biggest provincial city, and the third largest in South Africa, population approximately 3 million and growing.

Today you have a choice of two excursions:
Option 1 - Receive a wake up call at 6:00am to start an early morning game drive in the SpionKop Game Reserve.
Option 2 - Enjoy an escorted tour of the SpionKop Battlefields.
Please ensure that you are warmly dressed. As the morning drive progresses the weather can warm up considerably, so please ensure you have hats and sun protection. Rain capes will be available should it rain.

You return to the train for brunch which will be served between 11:00am to 1:00pm. At 3:00pm, the train arrives at Elandslaagte for an afternoon game drive in the Nambiti Private Game Reserve. The weather can be very warm, so please ensure you have hats and sun protection. As the evening drive progresses the weather can cool down considerably, so please ensure that you take warm clothing. Rain capes will be available if required. Dinner is served in the dining cars at 7:30pm.

The Nambiti Conservancy is a private Big Five bush retreat and game conservancy set on 20,000 acres of malaria-free bushveld at Elandslaagte. It has incredible biodiversity including savannah, grasslands, thornveld and tall acacia trees. The Sundays River flows through the reserve and has two 40 metre waterfalls with magnificent ravine bush, home to several rare bird species.

Elandslaagte Rail siding is adjacent to Nambiti Private Game Reserve and has also been declared a historic battle site of the second Anglo Boer War, Battle of Elandslaagte: 20 &amp; 21 October 1899.

From 7:00am to 10:00am breakfast is served as the train traverses the Highveld. Lunch is served at 1:00pm as the train heads for Centurion, where a steam engine will haul the train into Pretoria. At 4:00pm arrive at Rovos Rail's Capital Park Station, Pretoria where your journey ends.

Pretoria is the Administrative Capital of South Africa, filled with grand buildings and foreign embassies, giving the whole city a dignified presence. Sculptures and monuments attest to the city's Afrikaner history, along with well-preserved fine architecture, such as the Church Square in the city center. Overlooking the whole of the city from hilltop is the magnificent Sir Herbert Baker designed Union Buildings, built in golden stone with Italian tiled roofs, a Romanesque amphitheatre and African sculptures. Progress has brought high tech shopping centres, museums, art galleries and multi-culinary restaurants. The city has four universities, a number of scientific institutes and an abundance of open spaces with parks, bird sanctuaries, nature reserves and a zoo.