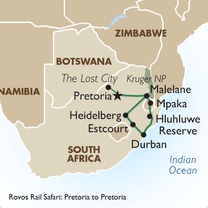 Already synonymous with luxury rail travel in Africa, Rovos Rail’s specialized golf safari allows guests to experience Golden Age splendour in between games, all while exploring one of the world’s most beautiful countries, South Africa.

Departing Pretoria, this 10 day journey stops at the famed courses of Sun City, Champagne Sports Resort and Leopard Creek Golf Estate. Durban Country Club offers unique challenges right by the ocean in one of South Africa’s favourite beach destinations. Tick another country off the list as you cross the border into Swaziland to tee off at Royal Swazi Sun.

Beyond an utterly unique golf trip, Ravos Rail also offers a range of exciting excursions and activities each day for non-golfing guests – or any players who just need a break! Most of the courses are located close to game reserves and national parks such as Kruger and Pilanesberg, or attractive cities such as Durban. Enjoy game drives, city excursions, and visits to historic sights.

Guests can of course mix the trips that interest them with some golf, or just relax between stops, enjoying first class meals and comfort aboard Africa’s most opulent rail journey.

Depart Rovos Rail Station in Capital Park Pretoria aboard the Rovos Rail at 12:00pm. Guests may unpack and freshen up in their suites before meeting fellow passengers in the lounge or observation cars. Lunch will be served at 1:00pm in the dining car. Enjoy afternoon tea and dinner in the dining cars as you head to Rustenburg. At 7:30pm, dinner is served in the dining cars.

The old town of Rustenburg grew as the church and administrative centre for a rich farming area. It is here, in the centre of a volcanic valley surrounded by the dun slopes of the Pilanesberg Mountains, a wilderness wonderland rises from the dust, the fantastical Sun City Resort. It was a vision realized through one man's unshakable faith in the religion of tourism, the South African hotel prodigy Sol Kerzner. It was officially opened on 7 December 1979 in what was then Bophuthatswana, which had been declared as an independent state by the apartheid government. This meant it could provide entertainment such as gambling, which was banned in South Africa. The UN had imposed a cultural boycott on South Africa in condemnation of apartheid. In the early 80s, several acts disregarded the boycott and performed (with substantial financial incentives from Kerzner) to desegregated crowds at the venue, such as the Beach Boys, Cher, Liza Minnelli, Frank Sinatra, Status Quo, Rod Stewart, Elton John and Queen. Today the resort is one of the world's largest entertainment centres, a luxury theme park for grownup kids. The two championship golf courses - one with crocodiles at the 13th hole - are bordered by the Pilanesberg National Park, which contains the Big Five and has a vigorous conservation programme.

Breakfast is served at 6:00am until departure. Transfer to Sun City's Gary Player/Lost City Golf Course for tee off and lunch. At 5:30pm depart to rejoin the train. Dinner is served in the dining cars at 08:00pm.

For Leisure Guests:
Breakfast is served in the dining cars at 6:00am. Transfer to Sun City at 7:45am with a game drive in the Pilanesberg Reserve around 9:00 am. Lunch is at 12:00pm with the golfers before enjoying an afternoon at leisure at Lost City's Sun City. At 5:30pm, depart to rejoin the train. At 8:00pm, dinner is served in the dining cars.

Day at leisure on the train. All meals enjoyed on board en route to Estcourt via Ladysmith.

The train climbs to Majuba Hill - site of the decisive battle that ended the First Anglo Boer War - then passes Newcastle, which has what is reputed to be the largest cella-dome Hindu temple in the southern hemisphere, and Glencoe, site of the first battle of the Anglo Boer War and now the centre of the province's coalfields.

Breakfast is served at 06:00am in the dining cars. The coach departs from Estcourt Station for Champagne Sports Resort. Golfers tee off and lunch. At 5:00pm, rejoin the train at Estcourt Station. Tea in the lounge and observation cars. At 7:30pm, dinner is served in the dining cars. Shortly after Chieveley, on the right of the track, stands a memorial to Winston Churchill who was captured here in November 1899 while trying to free an armored train trapped by a Boer ambush.

For Leisure Guests:
Breakfast is served until departure at 9:00am. Transfer to Spionkop Lodge to hear the historic tale of the Battle of Spionkop and walk in the footsteps of Churchill and Gandhi. Enjoy lunch at the lodge. At 2:00pm, afternoon game drive in the 11 000-acre reserve OR relax at the lodge. Return to the train at 4:00pm. Tea is served in the lounge and observation cars. Dinner is served in the dining cars at 7:30pm.

Breakfast is served until departure. The coach departs for Durban Country Club or Beachwood. Golfers tee off. Lunch is served at the clubhouse. Board the coach at 3:30pm and return to the train. The train departs Durban. Tea in the lounge and observation cars. Dinner is served in the dining cars. Please hand your passports to the Train Manager or Admin Deputy. They will be returned to you before the end of the trip.

For Leisure Guests:
Breakfast is served until departure at 9:00am. The vehicle departs for a Durban city tour with a visit to the botanical gardens and lunch at Umhlanga's beachfront. Board the coach and return to the train. The train departs Durban. Tea in the lounge and observation cars. Dinner is served in the dining cars. Arrive in Hluhluwe for an overnight stop. Please hand your passports to the Train Manager or Admin Deputy. They will be returned to you before the end of the trip.

Early morning wake-up call for a game drive in the Hluhluwe-Umfolozi Game Reserve. Tea, coffee, juices, fruit and pastries are served in the dining cars until departure at 6:00am. Transfer to Hluhluwe for a game drive. As the oldest proclaimed reserve in Africa, Hluhluwe consists 960 sq kms of hilly topography in central Zululand and is known for its rich wildlife and conservation efforts. It is the only state-run park in KwaZulu-Natal with all the Big Five game animals and is also a prime birding destination. Return to the train at 10:30am with lunch served at 12:00pm in the dining cars as the train departs for eSwatini where border formalities take place. Tea is served in the lounge car and observation car at the rear of the train. Dinner is served at 7:30pm in the dining cars as the train arrives at Mpaka for the overnight stop.

Breakfast is served in the dining cars until departure for Royal Swazi Sun. Board the coach and depart Mpaka Station for Royal Swazi Sun Golf Course (90 minutes). Golfers tee off and lunch. Non-golfers join golfers at the clubhouse. The coach departs for Mpaka Station to board the train at 4:00pm. Tea in the lounge and observation cars. The train departs for Komatipoort, crossing the border into South Africa. Dinner is served in the dining cars en route to Malelane in Mpumalanga Province. Arrive at Malelane for the overnight stop.

For Leisure Guests:
Breakfast is served in the dining cars until departure at 7:00am. Transfer by coach to Mkhaya and board the game vehicles for a game drive in the Mkhaya Game Reserve. At 10:00am, depart for a visit to Swazi Candles with lunch and an opportunity for craft/curio shopping. Transfer to the Royal Swazi Golf Course to join the golfers (10-minute transfer) and/or return to the train. Tea in the lounge and observation cars. At 7:30pm, dinner is served in the dining cars.

The tiny Kingdom of eSwatini (Swaziland) covers only 17 000 sq kms, most of which is mountainous. For such a small country, it is surprising that it sustains two capital cities: Mbabane is the administrative capital and Lobamba is the royal and legislative capital. In April 2018, Swaziland changed its name to the Kingdom of eSwatini (meaning "place of the Swazi") and is an absolute monarchy. It is landlocked and borders South Africa and Mozambique. At Swazi Candles, guests are invited to interact with the artisans as they make a variety of candles. Woodcarvings, colorful textiles and superb basketwork are also on display. Mantenga Lodge is nestled in the mountains overlooking 'Execution Rock'.

Breakfast is served in the dining cars until departure at 6:30am. Board open vehicles for a game drive in the Kruger National Park with tea, lunch, and an opportunity for curio shopping. At 3:00pm, return to the train. Tea in the lounge and observation cars. The train travels west across the Drakensberg Mountains and climbs the spectacular escarpment. At 7:30pm, dinner is served.

If available, golf at Leopard Creek may be booked on request for on own account.

For Leisure Guests:
Breakfast is served in the dining cars. At 9:30am, visit the Birds of Prey Rehabilitation Centre. At 11:00am, transfer (30 min) to Walkerson's Hotel for a presentation on fly-fishing with lunch. Return to Dullstroom at 3:00pm for an introduction to whisky distilling and a tour of the Arts &amp; Crafts Centre. At 7:30pm, dinner is served.

Please ensure your luggage is ready for collection at 9:45am and that you have your passport.
At 7:00am, breakfast is served in the dining cars. At 10:00am, the train arrives at journey's end at Rovos Rail Station in Pretoria.

**Please note maximum vehicle capacities are subject to change without prior notice.