FIRST-CLASS | RAIL: Enjoy an outstanding train tour starting from Pretoria which visits Kimberley and Upington in South Africa before crossing into Namibia, a country offering everything from huge canyons, wildlife safaris and old mining towns eventually finishing at Swakopmund. This is an experience offering unforgettable landscapes. 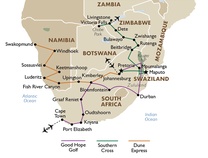 Join your Shongololo Express at Pretoria and after dinner, settle down for an overnight journey to Kimberley, the City of Diamonds, which came into existence with the diamond rush of the 1870s. It is the capital of the Northern Cape and is steeped in history and culture. It is now a modern city with malls, art galleries, restaurants and an active nightlife. You will have a visit to the Big Hole and also the Diamond Mine Museum.

Later depart for Upington arriving the next morning. Upington is one of the Northern Cape’s largest towns in the semi-desert of the Kalahari. A morning tour of the town includes a wine tasting at a Brandy and Wine Cellar. After this the train heads over the border into Namibia.

Arriving in Namibia the following day, there will be a visit to the Fish River Canyon, the largest canyon in the Southern Hemisphere and second only to Arizona's Grand Canyon in terms of size. The vast rocky landscape breaks up into a series of spectacular cliffs formed by the Fish River as it meanders between boulders at the bottom of the canyon.

The next day brings a full day of touring to Kolmanskop, Namibia's famous ghost town, a short distance from the port of Luderitz. In the early 1900 hundreds, it was a boom town for the diamond industry but due to better prospects elsewhere, it was basically abandoned. Luderitz, with its interesting Colonial architecture and wildlife including seals, penguins, flamingos and ostriches, is also visited.

Later that day, the train departs for Keetmanshoop for overnight. An old German town, Keetmanshoop features easy access to some visually stunning landscapes in Namibia. You will visit the Giant’s Playground with its unusual geological formations. When the light shines on them, the play of shadows on the red rock piles offer an amazing spectacle. Also visit Quivertree Forest where dozens of trees were grouped forming a forest in the heart of magnificent rocky peaks sculpted by erosion.

Later the train departs for Mariental and on arrival the next morning, you will be taken to the Sossusvlei Lodge in the Namib-Naukluft Park where you will have an overnight stay. The same day, you will head to the Sesriem Canyon shaped over millions of years and one of the few places in the area that holds water all year round.

At sunrise the next day, visit the Namib-Naukluft Park for a scenic drive. The dunes of the Namib Desert here were created by sand carried by the wind from the coast of Namibia. The sand is red in colour due to its iron-oxide content. As the light changes with the time of day, so does the dunes’ colour. In the evening, return to the train which departs for Windhoek.

In the morning, enjoy a tour of Namibia’s capital, an attractive city surrounded by hills and mountains. The tour of Windhoek includes the TransNamib Transport Museum built from 1912 to 1913. In front of the building is a narrow-gauge locomotive (vintage 1900), which used to operate between Swakopmund and Windhoek. Also visit the museum at the Alte Feste Castle offering a range of displays including the Social History Gallery and the Independence Display giving insight into Namibia's complex history. A final visit is the Namibia Craft Centre in the old Breweries Building.

Later the train continues to the Etosha National Park which will be visited the following morning and where you will spend the next night at a lodge. Enjoy a game drive and view zebra, springbok, endangered black rhino, lion, elephant and large numbers of antelope. Return to your train and head next to Swakopmund which you will visit the following morning.
Swakopmund, Namibia's seaside resort on the west coast is a charming place. It resembles a small Bavarian village nestled between the desert and the sea and offers a restful and relaxing atmosphere. Note the graceful Art Nouveau buildings dating back to the turn of the previous century.

After this your Shongololo train tour comes to an end.

This Shongololo Express Train Journey can be taken in the reverse direction from Swakopmund to Pretoria with the same inclusions. See full details on itinerary page.

10.00am Visit the Big Hole and Diamond Mine Museum in Kimberley.

12.30pm Return to the train in Kimberley and depart for Upington. Enjoy lunch on board.

Capital of the Northern Cape, Kimberley is well known for the discovery of diamonds which led to its establishment in 1893. Highlights include a visit to the Big Hole Diamond Mine Museum.

12.00pm The train departs Upington for Nakop for border formalities with Namibia. Enjoy lunch on board. Overnight Holoog.

A visit to the historical sights of Upington beginning with a drive past the Donkey Memorial, which honours the life of the working donkey, and the railway on the Orange River. Guests arrive at the Bezalel Wine &amp; Brandy Cellar for a tour and tasting after which we return to the train. Distance travelled: appx 80km.

9.00am Morning visit to the Fish River Canyon, the largest in the southern hemisphere.

12.30pm Return to the train and depart for Aus for overnight. Enjoy lunch on board.

The Fish River rises in the centre of the country, before flowing south into the Orange River, on Namibia's border with South Africa. In between, it has formed the great Fish River Canyon - the largest canyon in the southern hemisphere, and probably only second to Arizona's Grand Canyon in terms of size. The vast rocky landscape breaks up into a series of spectacular cliffs, formed by the Fish River as it meanders between boulders over half a kilometre below. Its size is impressive: 161km long, up to 27km wide and almost 550m at its deepest. Distance travelled: appx 180km.

8.00am Full-day tour of the ghost town Kolmanskop and Luderitz, well known for its colonial architecture and wildlife including seals, penguins, flamingos and ostriches. Look out for the legendary horses rumored to roam the Namib.

6.00pm The train departs for Keetmanshoop for overnight.

Luderitz lies at the end of the currently decommissioned railway line to Keetmanshoop. En route, you might see the legendary horses that are rumoured to roam the Namib desert as you visit the ghost town of Kolmanskop. Luderitz is known for its museum, colonial architecture and for wildlife including seals, penguins, flamingos and ostriches.

9.00am Morning tour of Keetmanshoop. See the Giant's Playground with its 20km-long dolerite dykes as well as Quiver Tree Forest, home to 300 species of the Aloe dichotomy.

1.00pm Return to the train and depart for Mariental. Enjoy lunch on board.

Visit Giant's Playground where dolerite dykes of between three to five metres in width and 20kms in length can be explored. Visit Quiver Tree Forest, which is home to roughly 300 specimens of the Aloe dichotomy. Between three to five metres tall, these prehistoric trees have forked branches that reach skywards; this visit makes for wonderful photographic opportunities. Distance travelled: appx 80km.

Overnight Sossusvlei Lodge with a Visit to Sesriem Canyon

9.00am Transfer to Sossusvlei Lodge in the Namib-Naukluft Park. Visit the Sesriem Canyon, shaped over millions of years by the Tsauchab River. Overnight at lodge.
**Please have an overnight bag ready this morning for departure. Bags have been placed in your cabin for your convenience.

The Tsauchab River has shaped the Sesriem Canyon over millions of years and it is one of the few places in that area that holds water all year round. The early Afrikaans explorers named the canyon after the fact that they had to use six (ses) leather straps (riem) tied together to create a rope long enough to lower water buckets into the canyon below.

Sunrise From Dune 45 and Scenic Drive Across Namib - Naukluft Park

Enjoy sunrise from Dune 45 followed by brunch at the lodge. Take a scenic drive through the Namib-Naukluft Park.

6.00pm The train departs for Rehoboth for overnight.

The dunes of the Namib Desert were created by sand carried by the wind from the coast of Namibia. The sand here is 5 million years old and is red in colour due to its iron-oxide content. As the lighting changes with the time of day, so does the appearance of the dunes' characteristic colour, allowing for interesting photographs at any time. The wind in the Sossusvlei area blows from all directions, which means that the type of the dunes hear are known as "star dunes". This is because the winds cause the sand to form a star shape with multiple arms.

9.00am City tour of Windhoek. See the Trans-Namib Transport Museum, the Alte Feste (Old Fortress), the Evangelical Lutheran Church - a striking landmark - and the Namibia Craft Centre in the old Breweries Building.

12.00pm Return to the train and depart for Otjiwarongo. Enjoy lunch on board.

Situated in Namibia's central highlands, Windhoek is an attractive city surrounded by clusters of hills and the impressive Auas and Eros Mountains. The city tour of Windhoek starts with a visit to the TransNamib Transport Museum. The museum is situated in the Windhoek Railway Station and was built from 1912 to 1913. In front of the building is the narrow-gauge locomotive (vintage 1900), which used to operate between Swakopmund and Windhoek. The museum at the Alte Feste Castle offers a range of displays, including the Social History Gallery and the Independence Display. Both give an insight into Namibia's complex history. At the top of Robert Mugabe Avenue is the Christuskirche or Evangelical Lutheran Church. This is one of the city's most striking landmarks and was built from local sandstone and completed in 1910. Romanesque, neo-Gothic and Art Nouveau styles influenced its design and Kaiser Wilhelm II donated its stained- glass windows. Your last visit is the Namibia Craft Centre in the old Breweries Building. Distance travelled: appx 50km.

10.00am Transfer to a lodge in Etosha National Park. Enjoy game-viewing activities. Overnight at lodge.
** Please have an overnight bag ready this morning for departure. Bags have been placed in your cabin for your convenience.

The park offers excellent game viewing in one of Africa's most accessible venues. Zebra and springbok are scattered across the endless horizon while the many waterholes attract endangered black rhino, lion, elephant and large numbers of antelope.

Enjoy a morning game drive before checking out and returning to the train.

3.00pm Rejoin the train in Otjiwarongo and depart for Kranzberg for overnight.

Arrive in Walvis Bay and Depart the Train

11h30 Arrive at Walvis Bay Station where your tour ends. Check out of the train.

Swakopmund, Namibia's seaside resort on the west coast, is a place of singular charm. It resembles a small Bavarian village nestling between the desert and the sea and enjoys a restful and relaxing atmosphere. The source of Swakopmund's continental vibe is the graceful Art Nouveau buildings dating back to the turn of the previous century.

* Please enquire for details of the reverse itinerary