DELUXE | TAILOR-MADE: Experience two great countries in one trip! Beginning a 3 night stay in Doha, you’ll have plenty of time to explore a city where modern and tradition blend together harmoniously. Next up, fly to Egypt to discover the many historic ruins, tombs an temples. Explore the great pyramids of Giza and sail the Nile as you temple hop between Aswan and Luxor. This trip offers a wonderful introduction to both countries. 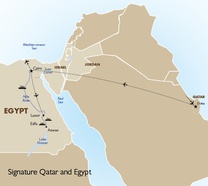 Explore a vibrant powerhouse of the Middle East before flying on to the powerhouse of the ancient world on this 11-day deluxe trip to Qatar and Egypt. Explore the best of Doha, then fly to Cairo to begin an essential Egyptian adventure encompassing Cairo and a Nile cruise.

Doha is one of the world’s great sleeper destinations… for now! This city on the Persian Gulf invites you to explore its incredible architecture and back-alley secrets on a half-day guided tour before taking you to Katara Cultural Village to explore the Qatar of times gone by. Those with a love for the finer things, or just innovative spaces, will fall in love with Pearl-Qatar as they explore the city’s excess. Your second day in Doha is at leisure, so feel free to shop, or embark on a desert tour to see the natural beauty of Qatar’s dunes.

Fly on to Cairo, the modern-day capital of Egypt and gateway to the mighty Pyramids of Giza. Explore these on a guided tour, visiting the Sphinx and marveling at the world’s sole surviving ancient wonder before going on to the Egyptian Museum, the world’s largest collection of Egyptian treasures. Then fly to sunny Aswan, the hub of Nubian Egypt and home to the spectacular Philae Temple and the High Aswan Dam.

Time to embark on your cruise down the mighty Nile over three nights, stopping at the temples of Kom Ombo and Edfu along the way. Kom Ombo is the dual temple devoted to the crocodile god Sobek, and the falcon god, Horus the Elder, while Edfu is one of the most intact and impressive temples of the ancient world.

Awake the next morning in Luxor, a vibrant city on the Nile, but also perhaps the world’s greatest open-air museum. The ancient capital of the New Kingdom, its west bank is famous for monuments such as the Mortuary Temple of Hatshepsut, the Colossi of Memnon, and of course the Valley of the Kings and the Valley of the Queens. After lunch and a short rest on board your vessel, explore the east bank’s biggest attractions, Luxor Temple, and the enormous Karnak temple complex.

Fly to Cairo after breakfast and settle into your hotel. Perhaps take some time to explore this incredible city, or stay an extra day or two to take in its impressive medieval Mosques, or the ancient Coptic quarter before you depart.

Board your overnight flight to Doha this evening.

Welcome to Doha. Upon arrival, you will be met and transferred to your hotel. The remainder of the day is at your leisure.

This morning, embark on your half-day tour of Doha. After pick up from your hotel, you'll discover the unique heritage of Downtown Doha as you wander through the vibrant labyrinth of alleyways of Souq Waqif. View modern-day Doha's towering iconic architecture as you drive along the Corniche, Doha's iconic waterfront where the azure waters of the Arabian Gulf provide the setting to the city's impressive skyline. We then proceed to Katara Cultural Village which is the largest cultural project in Qatar. Experience the cultures of the world with beautiful theatres, concert halls, exhibition galleries, and cutting-edge facilities. Next, head to The Pearl-Qatar, a man-made island with luxury accommodation, high-end shopping, and fine dining. Marvel at superyachts as you stroll along the marina, chic boutiques, and luxury car dealerships in a setting inspired by the architecture of the Middle East and the Mediterranean before heading back to your hotel. The remainder of the afternoon is at your leisure.

Today is at your leisure to relax and explore this wonderful city on your own or why not book an optional excursion such as a guided walking tour of the Souq Waqif or a Desert Tour?

After breakfast, you will be picked up from your hotel and transferred to your hotel in time for your onward flight to Cairo.

Upon arrival at Cairo International Airport, you will be met by Goway's local representative inside the customs and immigration area holding a sign board with your name on it. After being assisted with immigration formalities, you will be transferred to your hotel. You will be presented with the full documentation required, including domestic airline tickets by your representative when you arrive.

This morning, depart at 09:00 A.M for your full-day tour to visit the Pyramids, Sphinx, and Egyptian museum.

The pyramids and Sphinx were reckoned by the Greeks to be one of the Seven Wonders of the World. A single pyramid is built of 2,300,000 blocks, each weighing an average of two and one-half tons. In the face of such immensity, one cannot help but feel the wonder and awe that so many writers and artists have sought to convey over the centuries. The Cheops Pyramid is especially interesting since its interior burial chambers are open for inspection by the public. Not far from the Pyramids is the Great Sphinx of Giza, which dates from the time of Chephren (2620BC). Hewn from natural yellowish limestone and standing 65 feet high and 187 feet long, this unforgettable statue combines the head of a Pharaoh with a lion's body.

Today, you will transfer to Cairo Airport for your flight to Aswan. Upon arrival, you will be transferred to your ship, your floating hotel for the next 4 days as you cruise up the Nile.

Today's sightseeing includes Aswan's High Dam and the Temple of Philae. The Old High Dam was built by Sir W. Wilcox on Behalf of the British authorities in 1898. It is constructed of granite quarried in the Aswan area. The official opening took place in 1902. The Temple of Philae was dismantled and reassembled (on Agilika Island about 500 m from its original home on Philae Island) in the wake of the High Dam. The Temple dedicated to the Goddess Isis is in a beautiful setting, which has been landscaped to match its original site. Its various shrines and sanctuaries, which include a temple of Hathor, a Birth House, and two pylons, celebrate all the deities involved in the Isis and Osiris myth.

Aswan, Egypt's sunniest southern city and ancient frontier town, is located about 81 miles south of Luxor and has a distinctively African atmosphere. Its ancient Egyptian name was Syene. Small enough to walk around and graced with the most beautiful setting on the Nile, the pace of life is slow and relaxing. Days can be spent strolling up and down the broad Corniche, watching the sailboats etch the sky with their tall masts, or sitting in floating restaurants listening to Nubian music and eating freshly caught fish.

This morning sail to Kom Ombo where you will visit the Temple of Kom Ombo.

Kom Ombo is located on a bend in the river Nile about 50 km north of Aswan. Located on the east bank, Kom Ombo is home to an unusual double temple built during the Ptolemaic and Roman periods. The temple is dedicated to the crocodile god Sobek and the falcon god Haroeris (Horus the Elder). Despite being badly damaged, the temple is a beautiful sight as one approaches from either direction on the river, particularly as sunset nears and the colors change.

Return to the vessel to sail to Edfu where you will have a tour of the Edfu Temple, dedicated to the god Horus before setting sail to Luxor this evening.

After breakfast visit the West Bank and the burial ground of the Pharaohs including the Valley of the Kings, Valley of the Queens, the mortuary temple of Hatshepsut, and the Colossi of Memnon.

The Valley of the Kings in Upper Egypt is home to many pharaonic tombs of the New Kingdom, including those of King Tutankhamen and Ramses the Great. Each king's formal name and title are inscribed in his tomb, which is also adorned with his images and statues. Most of the tombs were cut into limestone following a similar pattern: three corridors, an antechamber, and a sunken sarcophagus chamber.

After enjoying lunch on board and a short rest, head out on an unforgettable excursion, to the Luxor Temple. Many festivals were celebrated in Thebes. The Temple of Luxor was the center of the most important one, the festival of Opet. Built largely by Amenhotep III and Ramses II, the temple served as a setting for the rituals of the festival, which was held to reconcile the human aspect of the ruler with his divine office. The procession of images of the current royal family began at Karnak and ended at the Luxor temple.

Karnak was erected in 1928 BC as a small shrine dedicated to Amun, god of Thebes then. The Temple of Karnak comprises three main temples, smaller enclosed temples, and several outer temples - all constructed over 1300 years. The three main temples of Mut, Monthu, and Amun are enclosed in enormous brick walls, with the temple of Amun at the center. Karnak is now the largest.

Disembark from your ship after breakfast and transfer to Luxor Airport for your flight back to Cairo, where you will be met and transferred to your hotel for the night.

The remainder of the day is at your leisure.

Check out and transfer to Cairo Airport for your onward flight early this morning to North America via Doha arriving later today.

Prices are "from" per person based on twin/double share accommodation and for travel in low season. Seasonal surcharges and blackout dates may apply. Limited seat/spaces and all pricing is subject to change and availability. Rates for single or triple travellers are available on request - please inquire.  Black out dates apply for departures 26 Oct'22 - 09 Jan'23.  Please enquire about departures from other cities, single supplements, extensions or upgrades.  CST#2070685-20. Registration as a seller of travel does not constitute approval by the State of California. BC#833-0 / ON#1532989 3284 Yonge Street, Toronto, ON M4N 3M7.