FIRST-CLASS | CRUISE: Journey along the Nile from Luxor to Aswan to explore some of the treasures of Ancient Egypt. Stroll through the temples and ruins of Luxor, known as the world’s greatest open-air museum, learn about the legends of Horus at Edfu, and see the engineering feat of the Aswan High Dam outside Aswan. 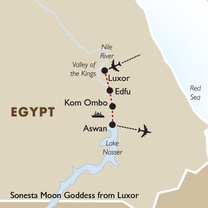 This 4-day Nile cruise transports you back in time to the land of Ancient Egypt and offers a taste of everyday life along the Nile River.

Your Egypt vacation begins in Luxor, often referred to as the world’s greatest open-air museum and one of Egypt’s undisputed icons. Board the luxurious Moon Goddess, which will be your home for the next few days, and begin your travels up the Nile. Your first stop is the Luxor and Karnak Temples, where you’ll walk amidst soaring pylons, towering obelisks, and statues of ancient gods. The next day, venture into the Valley of the Kings and Queens, home to the tombs of Tutankhamun and Ramses the Great. You’ll visit the Temple of Queen Hatshepsut before sailing to Edfu.

Located on the west bank of the Nile, Edfu is largely known for its connections to the ancient god, Horus, who did battle with his archrival Seth in the myths of Ancient Egypt. In Edfu, you’ll spend the morning exploring Edfu Temple before continuing up the river on route to Kom Ombo, home to the twin temple of Sobek, the crocodile god, and Haeroris, Horus the Elder. By nightfall, you’ll reach Aswan and take part in an Egyptian Galabeya Party to bring your day to a close.

Close out your Nile cruise in Aswan, a major Egyptian centre with a distinctly African atmosphere. Spend the final day of your Egypt vacation exploring the many highlights of Aswan. Head to the border between Egypt and Sudan to see the Aswan High Dam, which holds back Lake Nasser and is one of the world’s premier engineering feats. You’ll then end your vacation with a motorboat ride to the Temple of Philae, dedicated to the god Isis.

Today you will board your Nile Cruise Ship, your floating hotel for the next 4 days. After lunch, you will visit the Luxor and Karnak Temples, a holy city of pylons, hypostyle halls, colossal statues and obelisks built over many centuries, dedicated to the God Amon-Ra, his consort Mut, and their son Khonsu. Overnight in Luxor.

Luxor is a city that has often been called the "world's greatest open air museum". With the number and preservation of monuments in the area, it is unparalleled to anywhere in the world. Luxor is actually composed of three different areas: the city of Luxor - located on the east side of the Nile, the town of Karnak- located just north of Luxor, and Thebes - which is on the west side of the Nile across from Luxor.

This morning, cross the West Bank to visit the Valley of the Kings and Queens and the temple of Queen Hatshepsut. Afterwards, sail to Edfu. Enjoy lunch on board and the Captain's Welcome Cocktail and dinner following.

The small town of Edfu is situated on the west bank of the Nile, 56 km south of Esna and 105 km north of Aswan. Today, it is an important center for sugar production and pottery-making. The site of Edfu was known as Wetjetser-hor (classical name-Apollinopolos Magna), the place where the god Horus was worshipped and where the battle between Horus and his traditional enemy, Seth, in the ancient mythology, took place.

Today you visit Edfu Temple, Kom Ombo Temple and Sail to Aswan and end the night with a Galabeya Party aboard your floating hotel.

Kom Ombo is located on a bend in the river Nile about 50 km north of Aswan. Located on the east bank, it is home to an unusual double temple built during the Ptolemaic and Roman periods. The temple is dedicated to the crocodile god Sobek and the falcon god Haroeris (Horus the Elder). Despite being badly damaged, the temple is a beautiful sight as one approaches from either direction on the river, particularly as sunset nears and the colours change. Overnight in Aswan.

This morning Disembark from your hotel in Aswan after breakfast. Visit Aswan's High Dam, the ancient Granite Quarries and the Temple of Philae.

Just north of the border between Egypt and Sudan lays the Aswan High Dam, a huge rock filled dam which captures the world's longest river, the Nile, in the world's largest artificial reservoir, Lake Nasser. The dam, known as "Sadd El-Aali" in Arabic, was completed in 1970 after 10 years of work.

A short trip on a motorboat to temple of Philae will bring you to a magnificent vista of the island, before landing at what would have been the ancient quay on the south side. The temple was dedicated to the goddess Isis and has many legends connected to it. The most well-known legend tells the story of how Isis found the heart of Osiris here after his murder by his brother Seth.