DELUXE |CRUISE: Cruise in style and comfort on the luxury Sonesta Star Goddess on the epic Nile River while taking in the ancient delights of Aswan, Kom Ombo, Edfu and Luxor. This will be an enlightening experience as the history of the Pharaohs unfolds before you. 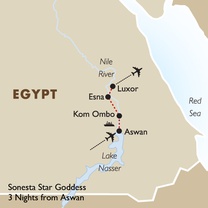 In Aswan, board your floating hotel, the Sonesta Star Goddess, an all-suite cruise ship. Then it’s off to discover the delights of this busy market city and popular tourist centre These include the Nubian Museum, the Tomb of the Aga Khan, the Botanical Gardens, the Temple of Khun and beautiful Elephant Island. A highlight here will be a visit to the Aswan High Dam built around 1900 to avoid the River Nile flooding its banks. Also, visit the ancient Temple of Philae.

Sail the next morning for Kom Ombo where you will visit the Temple of Kom Ombo built during the Ptolemaic and Roman periods dedicated to the crocodile god Sobek. Later continue to Edfu for a tour of the Edfu Temple dedicated to the god Horus. This evening enjoys a Galabeya Party when you will have the opportunity to dress up in the style of the Pharaohs. Moor overnight in Esna.

Set sail the following morning for Luxor with its wealth of ancient treasures. It is considered the world's largest open-air museum with its amazing temples from the Pharaonic era up to the Greco-Roman era. Go onshore to the West Bank and view the Valley of the Kings including the Tomb of King Tutankhamen and Ramses the Great, the Temple of Queen Hatshepsut and the Colossi Memnon among many other exceptional sites. Later cross to the East Bank to view the splendid Luxor and Karnak Temples.

The next morning you will disembark in Luxor to complete your luxury Nile cruise.

Today you board your Nile Cruise Ship, your floating hotel for the next 5 days. Sail on the Nile by Felucca around Kitchener's Island and Agha Khan. Enjoy a Nubian Folkloric Show and Dinner on board to end the night.

Aswan is the best winter resort in Egypt. On its eastern bank are mosques, bazaars, Ferial Gardens, Nubian Museum, Fatimid Cemetery, the Unfinished Obelisk of Queen Hatshepsut, Kitchener's Island and Elephantine Island, which is the largest in Aswan. As for its western bank there are tombs of local Pharaonic nobles and dignitaries, the tomb of Aga Khan, the Coptic Monastery of St. Simeon and the Old Aswan Dam.

Kom Ombo is located on a bend in the river Nile about 50 km north of Aswan. Located on the east bank, Kom Ombo is home to an unusual double temple built during the Ptolemaic and Roman periods. The temple is dedicated to the crocodile god Sobek and the falcon god Haroeris (Horus the Elder). Despite being badly damaged, the temple is a beautiful sight as one approaches from either direction on the river, particularly as sunset nears and the colours change. Return to the vessel to sail to Edfu.

This morning you will visit the Horus Temple in Edfu then sail to Luxor. Tonight enjoy a special Egyptian Galabeya Party. Overnight in Lucor

After breakfast on board, you will visit the Valley of the Kings, the Temple of Queen Hatshepsut at El-Deir, El-Bahari and the Colossi Memnon. Luxor is a major attraction for tourists in Egypt. It is considered the world's largest open-air museum with its various temples since the Pharaonic era until the Greco-Roman era, most famous of which is Karnak and Luxor Temples dedicated to the triad of Thebes. The West Bank of Luxor is known for the famous tombs of Seti I, Tut Ankh Amon, Tuthmosis III in the Valley of the Kings and Queen Hatchepsut's Temple.

The Valley of the Kings in Upper Egypt is home to many pharaonic tombs of the New Kingdom, including those of King Tutankhamen and Ramses the Great. Each king's formal name and titles inscribed in his tomb, which is also adorned with his images and statues. Most of the tombs were cut into limestone following a similar pattern: three corridors, an antechamber, and a sunken sarcophagus chamber.

The mortuary temple of Queen Hatshepsut of the 18th Dynasty was built just north of the Middle Kingdom temple of Mentuhotep Nebhepetre, amid the bay of cliffs known as Deir El-Bahri. In ancient times, the temple was called Djeser-djeseru, meaning the sacred of sacreds. The female pharaoh chose to build her temple in a valley sacred to the Theban Goddess of the west, on a direct axis with the Karnak Temple of Amun on the East Bank.

After lunch visit the Luxor Temple and Karnak Temples, a holy city of pylons (monumental gateways), hypostyle halls, colossal statues, shrines and obelisks built over centuries and dedicated to the God Amon-Ra, his consort Mut and their son Khonsu.

This morning you will enjoy breakfast on board and disembark at 8:00am.