MODERATE | SMALL GROUP: Explore the most iconic game parks in Tanzania on this journey across the country. Head to Serengeti National Park, Ngorongoro Crater, and Tarangire National Park to experience the breathtaking East African landscape and spot lions, elephants, and rhinos in the wild. 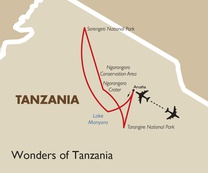 This 8-day Tanzania safari takes you to several of the best game reserves in the country, including the Serengeti, Ngorongoro Crater, Lake Manyara, and Tarangire.

Your journey begins in Arusha, which sits at the base of Mt. Mero near famous Mt. Kilimanjaro. The city acts as the region’s diplomatic hub, but it’s also the basecamp for safari tourism. Get acquainted with Tanzania’s particular rhythms before heading through the Masai Steppe on route to Lake Manyara National Park. Look out the window and gaze upon a landscape of maize, coffee, and banana plantations as you approach the rim of the Great Rift Valley and eventually Lake Manyara. This small game reserve abounds with geographical diversity. As you head on a game drive, you’ll spot elephants crossing the plains and the rare lion climbing the branches of a baobab tree.

Continue northwest, passing through the Ngorongoro Crater to reach Serengeti National Park, the most famous game reserve in the world and the home of the Great Migration. Every year, over a million wildebeest and zebra migrate across the plains of the park, but you’ll find more here than these migrating mammals. As you spend a day heading on game drives across the Serengeti, you’ll spot cheetahs racing across the plains, giraffes plucking leaves from the high branches of trees, and hyenas cooling in the shade. If you love birds, you’ll also have the chance to see ostriches stretching their legs and flamingos surrounding local waterholes.

Your Tanzania vacation turns back southeast, stopping off at a Masai village as you head to the Ngorongoro Crater, one of the world’s largest inactive volcanic calderas. Within its crater, you’ll find over 25,000 large animals, including lions, zebras, gazelles, and even the endangered black rhino. Head on game drives through a landscape of swamps, lakes, and sand dunes and spot elephants bathing in a waterhole or leopards sleeping in the shade until sundown when the hunt begins.

The final stop on your Tanzania Sampler is Tarangire National Park, which has the second-highest concentration of wild animals after the Serengeti. During your game drives, you’ll see large predators like lions drinking from the waters of the river and spot some of the stunning birds that call the park home. At the end of your time in Tarangire, head back to the airport in Arusha to continue your onward journey.

On arrival at Kilimanjaro International Airport you will be met by Goway's local representative and transferred to your hotel.

Your morning is at leisure except for your safari briefing followed by lunch. After lunch, depart Arusha passing through the Masai Steppe filled with many picturesque African villages as well as maize, coffee and banana plantations. At the town of Makuyuni turn North West and continue the journey through a scenic escarpment that brings you to your lodge, perched on the edge of the Rift Valley with stunning views over the distant Lake Manyara.

After breakfast, there is a game drive in Lake Manyara National Park. Lake Manyara National Park is one of Tanzania's smaller but most diverse parks. Its vegetation ranges from savanna to marsh to evergreen forest (11 ecosystems in all), and it supports one of the highest biomass of large mammals in the world. There are opportunities to see large families of elephants and the rare tree-climbing lions. Return to the lodge for lunch and then continue your journey North West across the stunning hilly countryside of the highlands, filled with wheat and coffee plantations, and then into the Ngorongoro Conservation Area. From here lie the vast plains of the Serengeti, where you begin spotting wildlife as you approach the entrance gate. Complete the formalities and enter the park with game viewing en route to the lodge arriving for dinner.

After breakfast, you depart for Ngorongoro stopping for a picnic lunch while viewing game across the Serengeti plains. After visiting a Masai village, continue to your lodge, set high on the rim of Ngorongoro Crater, the largest intact caldera in the world. Arrive in time for dinner.

A highlight awaits you this morning as you depart to explore what is commonly referred to as the World's largest natural wildlife arena. After breakfast, you descend with a picnic lunch through the early morning mists and 2,000 feet into the crater. Due to its size and diversity, the crater floor is comprised of several distinct areas, ranging from forest, swamps, lakes and springs, to open grassland and some sandy dunes. A truly unique wildlife experience. Return to the lodge in the late afternoon.

Depart Ngorongoro Crater after breakfast, head south-east past Lake Manyara and Mto wa Mbu Village. Through the highlands and the Karatu district, you'll view the scenic wheat plains and coffee plantations here before journeying down the spectacular escarpment turning south on to the main Arusha - Dodoma road and into the park. From here to the lodge, enjoy a game drive en route. Tarangire is home to all the big predators, all the classic African savannah species, plus with over 550 birds, it's a great place for birding. After lunch enjoy afternoon game viewing within the park.

Depart after breakfast and head north east to Arusha. The journey will pass through the Masai Steppe filled with many picturesque African villages as well as maize, coffee and banana plantations. On arrival in Arusha lunch is provided followed by transfer to Kilimanjaro Airport to connect international departure flight (booked by agent).