MODERATE | SMALL GROUP: From exploring the towering sand dunes in Namibia to floating along the stunning waterways of the Okavango Delta, this trip combines the best of Southern Africa as you make your way through South Africa, Namibia and Botswana before ending in Zimbabwe. 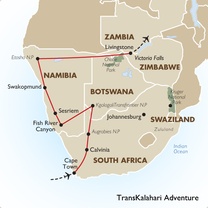 This 22-day trip between Cape Town and Victoria Falls can be taken in either direction and combines Africa’s spectacular wildlife with the surreal landscapes of Namibia.

In the shadow of majestic Table Mountain, Cape Town is perhaps Africa’s most beautiful city. Visit the Waterfront and take the cable car up Table Mountain for sweeping views out to Robben Island, the former political prison that once held numerous South African leaders including Nelson Mandela.

Spend a night in Calvinia, a town known for its wild flowers during the spring. Go on to Augrabies Falls National Park on the Namibian Border, where the Orange River is swallowed by a spectacular 18 kilometre gorge. Crossing into Namibia, explore Kgalagadi Transfrontier Park, keeping an eye out for the Black Mane Lions endemic to this region. A range of optional activities are available to immerse you further, including an encounter with the famous Bushmen.

Fish River Canyon is the world’s second largest, stretching up to 27 kilometres across at its widest point. Explore the area at leisure from your lodge’s convenient and picturesque location before going on to Sesriem, your gateway to the dunes of Sossusvlei. This is where Namibia becomes a truly alien landscape. The highest dune (known simply as ‘Big Daddy’) reaches over 300 metres into the air. Against its glowing red colours, dead acacia trees seem almost like shadows rising out of the desert. No wonder the area has featured in numerous science fiction movies and music videos!

The German colonial town of Swakopmund puts a range of optional excursions at your fingertips (balloon ride over the desert, anyone?). Travel through Damaraland to visit a Himba tribe before going on to Etosha National Park. If Namibia doesn’t have the same reputation for wildlife as its neighbours, it’s only because its native species are specially adapted to their desert surrounds. As a result, you’ll see subspecies of elephant, lion, wildebeest, giraffe and many others that can’t be seen anywhere else in the world. Namibia also boasts Africa’s largest Cheetah population.

Botswana on the other hand, is no stranger to safari-lovers! Your next stop is the Okavango River, one of the most ecologically diverse areas in the world. It’s home to each of the Big 5, along with hippos, hyena, cheetah, crocodile, zebra, the endangered African Wild Dog, over 400 species of birds and many more. You’ll have the opportunity to take game walks, bird walks and canoe excursions before going onto Chobe National Park. This is the jewel in Botswana’s wildlife crown and is believed to have the highest concentration of elephants in Africa. It’s also a wonderful chance to see any animals you may have missed in the Okavango.

Africa bids you a spectacular farewell at Victoria Falls, the world’s largest sheet of falling water. A range of activities are on offer to help you explore the Falls your way before you depart.

The tour starts on day 1 with a pre departure meeting at 6:00pm in the lobby of the hotel. Set against the majestic Table Mountain, Cape Town offers scenic, historic and cultural attractions.

Depart from City Lodge at 8:00am, for a full day peninsula tour. Driving along the Atlantic seaboard via Hout Bay and Chapman's Peak, visit the Table Mountain National Park, Cape Point, returning along the Indian Ocean coastline back to your well situated Waterfront hotel. A morning or afternoon cable car ascent up Table Mountain is included (weather dependent). Dinner can be enjoyed at the bustling Waterfront at own expense.

Departing Cape Town mid morning, we pass through the picturesque Namaqualand region. We overnight at the foot of the Van Ryns Pass. During the months of August - October the landscape is transformed into an explosion of colour due to the numerous wild flowers of the region. There is the opportunity of sampling the local wines of the area during a wine tasting at the Guesthouse (own expense).

Leaving the Little Karoo, we head north to the Augrabies Falls National Park. We pass through a lush oasis area with an abundance of wine farms. Here the mighty Orange River plummets 56m into the gorge below. The local name for these majestic falls is 'Aukoerebis' or 'place of great noise'. We spend the afternoon enjoying the falls from its many viewpoints.

We head north into the Kalahari and the magnificent Kgalagadi Transfrontier Park. Covering over 3.6 million hectares this is one of the largest reserves in Africa. Due to sparse vegetation in the area excellent predator sightings are common including that of the famous black mane Lion.

Leaving the Kalahari region we head west and enter Namibia arriving at our lodge situated in a scenically beautiful area. Afternoon or early next morning we visit the Fish River Canyon, which is one of the largest and most awe inspiring canyons in the world.

Our journey takes us north through ever changing scenery to our accommodation located on the edge of the Namib Desert.

An early departure this morning as we head for Sossusvlei, stopping in the dune belt to witness the changing colours of the world's highest sand dunes. We undertake a 5km walk to Sossusvlei and Deadvlei. In the afternoon, we enjoy a short hike through the Sesriem Canyon.

We reach the coast at Walvis Bay and enjoy lunch while viewing the many flamingos feeding. We arrive in Swakopmund and spend the afternoon and following morning exploring this German colonial town or booking one of the numerous optional excursions (own expense). Activities available include dolphin cruises or scenic flights over the vast Namib Desert.

Departing at lunchtime, we drive inland through the Damaraland region with its vast and rugged terrain. Its mountain ranges are intercepted by wide gravel plains, which run into sandy, vegetated riverbeds and hot, dry valleys. Our lodge is located on top of a mountain with spectacular views of the surrounding area. Spend the late afternoon taking in the incredible setting.

Today we proceed to Etosha National Park where we enjoy our first game drive in open 4x4 vehicles from our lodge located just outside the park entrance. The park’s main characteristic is a salt pan so large it can be seen from space. Yet there is abundant wildlife that congregates around the waterholes.

This Park is one of the most important reserves and game sanctuaries in Africa with thousands of wild animals such as blue wildebeest, springbok, zebra, kudu, giraffe, cheetah, leopard, lion and elephant making this area their home. The day is spent on game drive in our Overland vehicle through the Park from the Western to the Eastern side of the Park.

We depart Etosha and enter the Caprivi Strip where we spend the night set amongst the lush vegetation overlooking the Okavango River and Angola. An optional afternoon boat cruise on the river is available (own account).

Continuing into the Caprivi, we cross into Botswana and travel by road to our lodge on the edge of the Okavango Delta.

We travel by boat 30 minutes into the delta. We do mokoro &amp; boat excursions in the back channels of the Nxamasire area of the delta. Game walks are also done on the smaller islands in the area subject to the water levels of the delta.

Travel through the Caprivi Strip in Namibia and cross back into Botswana via the Chobe National Park, we overnight on the banks of the Chobe River. Chobe is famous for its beautiful scenery, magnificent sunsets and abundance of wildlife and birdlife.

Today, we relax on a morning game drive &amp; a sunset game-viewing cruise on the Chobe River.

We travel across the Zimbabwean border to Victoria Falls - without doubt one of the greatest and most spectacular sights in Africa. The afternoon and following morning is spent at leisure to browse the local markets, to experience the many optional activities on offer in the adrenalin capital of Africa including helicopter flights over the Falls and to visit the Falls (own expense).

After breakfast, the tour concludes.

Groups size 4-16 passengers. Departure guaranteed with a minimum of 4 passengers.