FIRST-CLASS | PRIVATE: Perfect for travellers short on time, this classic tour offers a great introduction to the world of Ancient Egypt. Start in Cairo where you’ll see the pyramids of Giza and the Egyptian Museum before connecting to Aswan to cruise the Nile River to Luxor, seeing temples and tombs along the way. 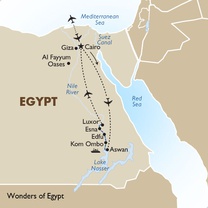 This 7-day Egyptian vacation takes you to Cairo to see the temples before cruising the Nile from Aswan to Luxor. It features first-class accommodations and private tours.

Your journey begins in Cario, the Egyptian capital, which has had an incalculable role on world history and culture. A full-day tour will showcase the great treasures of Ancient Egypt. Start at the Egyptian Musuem, where you’ll see mummies as well as artifacts taken from the tomb of King Tutankhamun. Continue to Giza, where you’ll explore Cheops Pyramid, also known as the Great Pyramid, the last remaining wonder of the ancient world. You’ll also see the enigmatic Sphinx before returning to Old Cairo.

Fly south to Aswan along the Nile River and board the M/S Nile Goddess, your floating hotel for the next three nights. Begin a journey along the Nile River, the world’s longest river, starting at the Aswan High Dam, which dams the mighty Nile and feeds the world’s largest reservoir, Lake Nasser. Explore the Temple of Philae, dedicated to the goddess Isis, before leaving Aswan and heading north. First stop is Kom Ombo, where the unique Temple of Kom Ombo sheds light on multiple time periods with its twin dedications to Sobek and Horus the Elder. Continue to Edfu, where you’ll see one of the greatest ancient temples, the Temple of Horus. Continue north until you reach Luxor, often called one of the world’s greatest open-air museums. You’ll visit the Valley of the Kings just outside the city to see the tomb of King Tutankhamun and the mighty Temple of Hatshepsut, dedicated to the only woman to rule Ancient Egypt. You’ll also visit the Temple of Karnak and Temple of Luxor before you disembark and return to Cairo.

After one final night in the capital, you’ll head to the airport and connect back home.

Located on the banks of the River Nile, the Ramses Hilton hotel is a stunning destination in the heart of Cairo. Take in views of the Nile and the Pyramids from this Egypt hotel's 36th-floor Windows on the World restaurant. Relax by the outdoor pool or enjoy coffee and pastries at the Garden Court Café. The Ramses Hilton hotel boasts a British-style pub, an Indian restaurant, a shopping Galleria and Executive Lounge.

The Pyramids and Sphinx were reckoned by the Greeks to be one of the 'seven wonders of the world'. A single pyramid is built of 2,300,000 blocks, each weighing an average of two and one-half tons. In the face of such immensity, one cannot help but feel the wonder and awe that so many writers and artists have sought to convey over the centuries. The Cheops Pyramid is especially interesting since its interior burial chambers are open for inspection by the public. Not far from the Pyramids is the Great Sphinx of Giza, which dates from the time of Chephren (2620BC). Hewn from natural yellowish limestone and standing 65 feet high and 187 feet long, this unforgettable statue combines the head of a Pharaoh with a lion's body.

Cairo to Aswan on Egypt Air

Today you will embark your Nile Cruise Ship, your floating hotel for the next 4 days. After lunch, and sail on the Nile by felucca. Before dinner attend the Captain's Welcome Cocktail reception. After dinner enjoy the Nubian Folkloric Show. Overnight in Aswan.

Just north of the border between Egypt and Sudan lays the Aswan High Dam, a huge rock fill dam which captures the world's longest river, the Nile, in the world's largest artificial reservoir, Lake Nasser. The dam, known as ''Sadd El-Aali'' in Arabic, was completed in 1970 after 10 years of work.

After breakfast you will visit the High Dam, the Granite Quarries and the Temple of Philae. Set sail after lunch to Kom Ombo and have afternoon tea before visiting the temple shared by the two gods Sobek and Haeroris. Sail to Edfu afterwards where Dinner and a Galabeya party will be your evening fare. Overnight in Edfu.

A short trip on a motorboat to temple of Philae will bring you to a magnificent vista of the island, before landing at what would have been the ancient quay on the south side. The temple was dedicated to the goddess Isis and has many legends connected to it. The most well known legend tells the story of how Isis found the heart of Osiris here after his murder by his brother Seth.

Kom Ombo is located on a bend in the river Nile about 50 km north of Aswan. It is home to an unusual double temple built during the Ptolemaic and Roman periods. The temple is dedicated to the crocodile god Sobek and the falcon god Haroeris (Horus the Elder). Despite being badly damaged, the temple is a beautiful sight as one approaches from either direction on the river, particularly as sunset nears and the colours change.

The small town of Edfu is situated on the west bank of the Nile, 56 km south of Esna and 105 km north of Aswan. Today, it is an important centre for sugar production and pottery-making. The site of Edfu was known as Wetjetser-hor (classical name-Apollinopolos Magna), the place where the god Horus was worshipped and where the battle between Horus and his traditional enemy, Seth, in the ancient mythology took place. The main monument at Edfu is the Ptolemaic Temple of Horus on the edge of the town. The temple is perhaps the best-preserved in all of Egypt and ranks second behind Karnak, simply because of its immense size, approximately 230 by 400 feet with a pylon measuring over 100 feet high. At the temple's entrance stand two large black granite statues of Horus depicted as a falcon. The elaborate carvings on the walls of the temple are as beautiful as if they were carved just yesterday. Inside the temple is a small sanctuary where the priests of the day offered the best parts of the animals to the gods.

After breakfast, you'll visit the Horus Temple in Edfu before setting sail for Luxor. Your afternoon and evening will consist of lunch, the Whirling Dervish and Belly Dance show, and after dinner there will be music in the lounge bar. Overnight in Luxor

Luxor is a city that has often been called ''the world's greatest open air museum'', with the number and preservation of monuments in the area, it is unparalleled to anywhere else in the world. Luxor is actually composed of three different areas: the city of Luxor - located on the east side of the Nile, the town of Karnak - located just north of Luxor, and Thebes - which is on the west side of the Nile across from Luxor.

This morning after breakfast, you'll disembark and visit the West Bank across the Nile from Luxor, where you will find the Valley of the Kings which includes the tombs of the Thebian rulers, and the mortuary temple of Hatshepsut, the only woman pharaoh to reign in ancient Egypt (in the new Kingdom). Her temple, with its impressive architecture, is traditionally associated with Hathor, the goddess of love and joy. It was formerly surrounded by tropical gardens with plants imported from Somali land.

This afternoon, visit the East Bank including Karnak and Luxor Temples before disembarking your ship.

Luxor to Cairo on Egypt Air

Located on the banks of the River Nile, the Ramses Hilton hotel is a stunning destination in the heart of Cairo. Take in views of the Nile and the Pyramids from this Egypt hotel's 36th-floor Windows on the World restaurant. Relax by the outdoor pool or enjoy coffee and pastries at the Garden Court Café. The Ramses Hilton hotel boasts a British-style pub, an Indian restaurant, a shopping Galleria and Executive Lounge.