Witness a once in a generation event on this unforgettable journey to Antarctica. Join an expedition crew and venture to Antarctica in time to see the total solar eclipse in December 2021, the first time this rare phenomenon will have been visible from the South Pole since 2003. 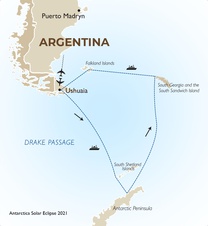 This 20-day Antarctic vacation takes you to the Antarctic Peninsula, the South Shetland Islands, South Georgia Island, and the Falklands in time to experience a solar eclipse, which only occurs every 20 years or so at the South Pole. It features first-class accommodations aboard an ice cruiser, shared tours, and is truly a once-in-a-lifetime opportunity for adventurers to take in this unforgettable event.

Your journey begins in Ushuaia, at the southernmost tip of Argentina. Spend a night in this frontier town before joining your vessel, the Ocean Diamond, and beginning your journey across the Beagle Channel and south to Antarctica. The Ocean Diamond is a fully-equipped super-yacht capable of holding up to 189 passengers on its journeys through Antarctic waters. You’ll spend two days crossing the Drake Passage, the stormy waters dividing South America and the South Pole. During your time on board, you’ll prep for the days ahead by learning about the history and wildlife of the southernmost continent from the expedition crew. You’ll also have a good chance of spotting migrating whales in the waters below, as well as seafaring birds like albatrosses and storm petrels in the airs above.

You'll first lay eyes on Antarctica in the South Shetland Islands. You’ll spend three days exploring these islands and the Antarctic Peninsula. Each day, head on zodiac excursions with the expedition crew to explore the frozen landscape. You’ll hike to penguin colonies and have the chance to see chinstrap, Adelie, and Gentoo penguins. You’ll also spot all manner of seals, from Weddel to fur to crabeater. Be sure to bring an excellent camera with you as you’ll need it to shoot fabulous images of these animals, as well as the minke whales that show up in the icy bays. If you’re feeling particularly bold, you can even take the polar plunge in the chilly Antarctic waters.

After exploring the Antarctic Peninsula, you’ll spend two days crossing the Scotia Sea between the South Orkney Islands and South Georgia. During this time, you’ll learn about astronomy from retired NASA scientist, Fred Espenak, and get prepped on what to expect from the solar eclipse. On the third day, it’s time for the main attraction: the solar eclipse. Head on deck to watch the moon block out the sun for one minute and 40 seconds. The eclipse sits much lower on the horizon at this extreme southern latitude, which makes it much more difficult to spot, but once you do spot the eclipse through your special viewing glasses, you’ll be rewarded with a sight you’ll remember for the rest of your life. After the sun has returned to the sky, celebrate with a champagne lunch with your fellow passengers.

Reach South Georgia Island and spend four days exploring one of the most fertile spots in southern waters. You’ll spot all manner of penguins and seafaring birds on the island, as well as remnants of whalers from the 19th and early 20th centuries. Hike alongside abandoned bases, skirt whaling stations on the coast, and visit Grytviken, one of the first whaling stations established in sub-Antarctic waters, and the resting place of iconic Antarctic explorer, Ernest Shackleton.

Return to sea and spend another two days crossing the waters on route to the Falkland Islands. In the Falklands, you’ll head on zodiac excursions to visit penguin colonies and spot other fascinating birdlife that live on the islands. You’ll also have a chance to visit Stanley, the capital of the Falklands and a rugged British outpost with a quiet atmosphere. You’ll then head back to sea and return to Ushuaia.

When you reach Ushuaia, you’ll bid farewell to your fellow explorers and disembark.

You will begin your journey in Ushuaia, a small but bustling port at the tip of South America. It's the ideal gateway for you to explore the southern extent of Patagonia while preparing for your adventure ahead. Get active in the mountains or enjoy handcrafted chocolate at a cafe in town.

Embarkation will occur in the late afternoon, after which your vessel will sail down the historic Beagle Channel, which transects the Tierra del Fuego archipelago in the extreme south of South America. Expect an air of anticipation as you depart!

Your days at sea are filled with presentations led by your Expedition Team who will prepare you for the wildlife, glaciology and history that will greet you upon your arrival.

In between presentations, spend time on deck looking for wildlife or chatting with your shipmates over a drink at the bar.

The most common reaction upon reaching the White Continent is a sense of reverence and awe. The experience is hard to put into words, since few places are as untouched and enduring as Antarctica.

You will discover that Antarctica is a land of extremes. At one moment you'll be overcome with a feeling of complete isolation and silence, and at the next moment you'll be inspired by nature as a calving glacier crashes into a brilliant blue sea or a penguin waddles by to inspect your footwear.

Your Expedition Team will take care of you at each excursion, whether you are Zodiac cruising, visiting a historical site or consorting with penguin colonies. Chinstrap, Adelie and gentoo penguins are found here, along with Weddell, fur, crabeater and leopard seals. Keep a lookout for Antarctic whales, such as minkes, while on a Zodiac cruise. Each day and each excursion will present a new collection of creatures to delight you and keep your camera busy.

As exciting as the Zodiac excursions and landings are, perhaps you'll treat yourself to an extra special Antarctic experience by partaking in an optional paddling excursion (at an extra cost) or cast reason aside and jump into Antarctic waters for the Polar Plunge!

Say goodbye to the Antarctic Peninsula, as your next destination is the Scotia Sea, between the South Orkney Islands and South Georgia, where you'll witness a rare natural phenomenon: a total eclipse of the sun in Antarctica!

Our Expedition Team will prepare you in advance with expert presentations and workshops on astronomy, meteorology and other related topics to help prepare you for that once-in-a-lifetime event: total solar eclipse in Antarctica. Joining you for the eclipse is world-renowned eclipse expert Fred Espenak. Known as ''Mr. Eclipse,'' Fred is a retired NASA scientist and has participated in 29 eclipse expeditions around the world.

Early this morning, you will be summoned on deck to witness an extraordinary, much-awaited moment: a solar eclipse, the very brief period (1 minute, 40 seconds) when the moon blocks the sun's light, plunging the polar regions into darkness. Every guest will be provided with a pair of eclipse glasses before the momentous event. You'll savor the stillness of this magical moment with your fellow umbraphiles (eclipse chasers), knowing you're among the few to have witnessed this once-in-a-lifetime phenomenon. As with all eclipse sightings, visibility is influenced by the weather and cloud conditions.

Unique to this experience will be its location at sea, and the more extreme latitude which places the eclipse low on the horizon, making a successful sighting that much more difficult, and more rewarding should all the stars align for the eclipse to be visible. After the eclipse concludes around breakfast time, feel free to celebrate the unforgettable moment or return to your bed. In addition to the eclipse glasses, guests will also receive an invitation to a special celebratory toast to commemorate their special total eclipse voyage.

South Georgia is one of the most fertile breeding grounds in the world for sub-Antarctic wildlife, with beaches blanketed with penguins. It won't take you long to realize that you are in a bird paradise, as burrowing seabirds, albatross and petrels can be seen in abundance.

You'll find that South Georgia, once a popular base for whalers and sealers, is also scattered with abandoned relics and evidence of human activity from centuries gone by.

Your Expedition Team will help bring those days to life while you visit old whaling stations and enjoy presentations on the South Georgia of then and now.

One of the most significant sites you will visit on the island is Grytviken. This settlement is one of the first whaling stations established in sub-Antarctic waters. Many travelers find that this place has a special appeal, as it is home to the remains of Sir Ernest Shackleton, one of the most famous Antarctic explorers.

Today, you are enroute to Falkland Islands.

Spend time on deck watching for seabirds and whales, enjoy presentations by your Expedition Team, or simply relax and reminisce about your incredible experiences.

Upon your arrival in the Falklands (Malvinas), your camera will get its first real workout capturing the abundant wildlife and rugged feel of this sub-Antarctic region. The archipelago contains two main islands, East Falkland and West Falkland, which you will explore during daily Zodiac excursions and landings.

Stanley, also known as Port Stanley, is often a favored landing site, as the town offers a unique British outpost feel, complete with eclectic charm. You'll be free to explore, grab a pint at the local pub or visit numerous churches and museums.

In terms of wildlife, the archipelago is home to Magellanic, gentoo and southern rockhopper penguins. If you're lucky, you may even spot king penguins here as well! You can expect to see black-browed albatross, plus two endemic bird species - the flightless Falkland steamer duck and possibly the elusive Cobb's wren.

Your team of lecturers and specialists will be sure to educate you on the local flora and fauna, making the most out of your time in the Falklands.

After more than two weeks of endless wildlife encounters, your journey home begins.

After breakfast aboard the ship, it is time to part ways and say goodbye to your Expedition Team. Airport transfers will be provided for those departing on the first homeward flights. Other guests will be transferred to town.