Cruising Antarctica in Style: Silver Explorer Ushuaia to Ushuaia via the Falklands

Join the world’s most illustrious explorers as you set foot on the white continent and embark on 18 exceptional days of excitement. Revel in the photograph opportunities as you become acquainted with the beauty of the Falkland Islands. Encounter penguins, watch for seals, dolphins, and whales, and spot seabirds flying overhead on this spectacular adventure. 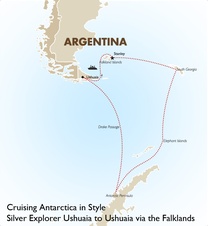 This 18-day Antarctica vacation takes you from Ushuaia on the tip of South America to Antarctica, visiting the Falkland Islands along the way.

Your Antarctica vacation begins in Ushuaia, Argentina’s tourism base for Tierra del Fuego (Spanish for “The End of the World”), the southernmost region of South America. Ushuaia is a bustling town that caters to adventurers, so you’ll find plenty to keep you engaged before your voyage begins. You can learn about the town’s history pre-European contact and its origins as a penal colony, or grab a pint at the world’s southernmost microbrewery before boarding the Silver Explorer to begin your journey to Antarctica.

Silver Explorer is a luxury expedition vehicle purpose-built to withstand the ice and climates of the South Pole. Its fleet of zodiacs makes excursions a breeze once you enter Antarctic waters. But while traversing the sea, you’ll also have full access to the ship’s range of activity centres, including the Explorer Lounge, Zagara Spa, and Tor’s Observation Library.

First stop is West Point Island, just northwest of West Falkland. On West Point Island, you can see Peale’s dolphins, traverse across moorland and cliffs to snap some great photographs, and ascend Devil’s Nose to spot a colony of Black-browed Albatrosses and Rockhopper Penguins. Pass onto Saunders Island to see the island’s sheep farm as well as penguins of all kinds, from Gentoo and King Penguins to Rockhopper and Macaroni. You’ll close out your exploration of the Falkland Islands in Stanley, the island capital. However, don’t let the word “capital” fool you; Stanley is a village of brightly-coloured homes reminiscent of Britain from centuries past. Here you can see the wreck of the Lady Elizabeth—a testament to the dangerous waters—and witness how penguins outnumber humans 10 to one.

From the Falklands, your Antarctica vacation continues to South Georgia Island. This snow-capped island is home to glaciers and mountains, and the occasional grassland when the snow melts away. It’s also covered with incredible wildlife, from southern fur seals and elephant seals to albatrosses and King Penguins. Aside from the wildlife, South Georgia is most significant for its role in the history of Antarctic exploration. For instance, this was the island Ernest Shackleton arrived on after voyaging on the open sea in a quest to find rescue for his stranded crew.

Continue your exploration of Antarctic history by heading to Elephant Island, where Shackleton’s crew was stranded for four months after their ship, the Endurance, was trapped in sea ice. The statue of Luis Pardo, a Chilean captain who helped Shackleton rescue his crew, is worth a look, although the island’s wildlife and topography are the main attractions here. The island’s pink colour and the large presence of elephant seals give the island its name. The seals and their rivals, the Chinstrap penguins, provide the island with its charm.

From Elephant Island on, you’re in Antarctica. After leaving Elephant Island, it doesn’t take long to reach the Antarctic Peninsula, a landscape of icebergs, glaciers, ice-cold waterways, and countless penguins, seals, and the occasional whale. You’ll take a few days to explore this region of the South Pole, breathing in the chill air and witnessing the majesty of icebergs and frozen waterways. Whether you spend your time becoming an expert at identifying the wildlife, learning to tell an Adelie Penguin from a Gentoo Penguin like you would a dog from a cat, or exploring the landscape, whether that means taking to the sea on a zodiac to come alongside calving icebergs or hiking across the icy stretches of terrain, you’ll become one of the world’s elite Globetrotters merely by stepping foot here.

After surveying the Antarctic Peninsula, you’ll return to Argentina by way of the Drake Passage, the turbulent waterway that sits between Cape Horn and the South Shetland Islands. While the waters can be rough, the high winds and water flow conflux makes the passage abound with birds and whales who have come to feed on the fish and plankton. The Drake Passage will provide one last bit of adventure before your Antarctica vacation comes to a close.

At 55 degrees latitude south, Ushuaia (pronounced oo-swy-ah) is closer to the South Pole than to Argentina's northern border with Bolivia. It is the capital and tourism base for Tierra del Fuego, the island at the southernmost tip of Argentina. Although its stark physical beauty is striking, Tierra del Fuego's historical allure is based more on its mythical past than on rugged reality. The island was inhabited for 6,000 years by Yamana, Haush, Selk'nam, and Alakaluf Indians. But in 1902 Argentina, eager to populate Patagonia to bolster its territorial claims, moved to initiate an Ushuaian penal colony, establishing the permanent settlement of its most southern territories and, by implication, everything in between.

While we're at sea, enjoy wine tastings, designer boutiques, language and dance classes. Take in a matinee movie, check the market or your e-mail in the Internet Point, slip away with a novel from the library to a sunny chaise or with a movie to your suite. Or just take in the sun pool side. The choice is yours

Located slightly northwest of West Falkland, West Point Island is used for sheep farming and nature observations. Peale's dolphins and the distinctive black and white markings of the Commerson's dolphin can usually be seen in the waters around West Point Island. Rolling moorland and steep cliffs make for great photographic opportunities, but the main attraction is the Devil's Nose, a cliffside colony of Black-browed Albatrosses nesting side-by-side with feisty Rockhopper Penguins. Magellanic Penguins and Magellanic Cormorants can also be found on the island.

Saunders Island is the fourth-largest of the Falkland Islands in the western portion of the archipelago. The island's topography is unusual, being made up of three peninsulas linked by narrow necks, and three big upland areas. Today the island is run as a sheep farm, but has historical importance as the location of the first British settlement in the Falklands. Saunders' wildlife is also impressively varied. It is possible to see Gentoo and King Penguins in the open dune and sand-flat area, while Rockhopper Penguins (with the odd pair of Macaroni Penguins in between them), Imperial Shags and Black-browed Albatrosses frequent Mount Richards, the highest point on the island at 457 m (1500 feet).

Tiny Stanley, capital of the Falklands, seems in many ways like a British village fallen out of the sky. Many homes are painted in bright colours, adding visual appeal to this distant outpost. Not far offshore, the wreck of the Lady Elizabeth, is one of the many vessels remaining as a silent testimonial to the region's frequent harsh weather conditions. The islands, also known by their Spanish name of Islas Malvinas, are home to arguably more tuxedo-clad inhabitants of the penguin variety than human residents. Various species, such as Gentoo, Magellanic and the more elusive King penguins, either live here permanently or use the Falklands as a stopover on their migration route.

South Georgia is a breathtaking destination of towering snow-covered mountains, mighty glaciers, and low-lying grasslands that attract an astounding concentration of wildlife.

It is possible to find Southern fur seals, Southern elephant seals and a variety of albatross species including Black-browed, Light-mantled Sooty, Grey-headed and the spectacular Wandering Albatross, plus thousands of King and Macaroni Penguins.

South Georgia is also linked to the early Antarctic explorers. Captain James Cook first stepped ashore in 1775, but perhaps more famous is Ernest Shackleton's arrival in 1916 following the sinking of his ship Endurance.

Awesome glaciers flecked with pink algae can be seen approaching Elephant Island - so named either for its elephant-like appearance or for sightings of elephant seals here. Elephant Island is home to several Chinstrap Penguin rookeries, as well as 2,000-year-old moss colonies. Weddell seals and Macaroni Penguins can also be spotted. In 1916, when Ernest Shackleton's ship Endurance was crushed in pack ice in the Weddell Sea, the crew was stranded here for more than 4 months finding shelter under two upturned lifeboats on the spit of land Shackleton's men named 'Point Wild'. The bust of the Chilean captain Luis Pardo has been erected here to commemorate the successful rescue in the tug Yelcho.

Remote and otherworldly, Antarctica is irresistible for its spectacular iceberg sculptures and calving glaciers, and for the possibility of up-close encounters with marine mammals and the iconic penguins.

The Antarctic Peninsula -- the main peninsula closest to South America -- has a human history of almost 200 years, with explorers, sealers, whalers, and scientists who have come to work, and eventually intrepid visitors coming to enjoy this pristine and remote wilderness.

Antarctica is a region of protected bays, unscaled snow-capped mountains, vast glaciers and a few places where whalers or scientists have worked.

Another day of exploration.

The Drake Passage has a notorious reputation for its turbulent seas due to the westerly winds and the funneling effect of the passage. The Antarctic Convergence, a natural boundary where cold polar water flows northward and warmer equatorial water moves southward, is within the Drake Passage. When these two currents meet, nutrients are pushed to the surface, often attracting a multitude of seabirds and whales. Black-browed Albatross, Sooty Shearwaters and White-chinned Petrels glide in the air currents alongside and in the wake of the ship.

The vessel docks in Ushuaia at approximately 800AM.