Explore the southernmost reaches of the planet on this epic Antarctica vacation. Passing from Argentina to New Zealand, you’ll traverse the frozen oceans aboard a purpose-built ice cruiser, make landfall at far-flung locations on the Antarctic Peninsula, and visit remote islands and regions that few explorers ever reach. 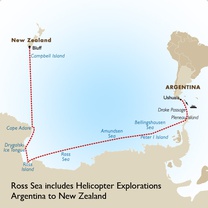 This 32-day Antarctica vacation takes you across the expanse of the south ocean, passing from Argentina to New Zealand as you explore the icy reaches and frozen seas of Antarctica.

Your Antarctica vacation begins in Ushuaia, a frontier town pitched on the southern tip of South America. After chumming with fellow globetrotters in the town’s adventure bases, board the M/V Ortelius, an ice cruiser capable of accommodating up to 116-123 passengers. With 22 crew members, 19 hotel staff, and eight expedition specialists, M/V Ortelius is expertly-staffed and ideally-equipped to brave the south seas and offer passengers as much time on shore as possible. It offers the comforts of a hotel with the technical superiority of a scientific research vessel.

Aboard M/V Ortelius, you’ll cruise across the Lemaire Channel to the Antarctic Peninsula, where you’ll explore desolate landscapes that are home to fascinating wildlife. Make first landfall on Pleneau Island, where you’ll find fur seals, Gentoo penguins, kelp gulls, and south polar skuas. Continue on to Petermann Island to see more Gentoo penguins as well as Adelie penguins. You’ll also stop off in the First Islands, home to even more penguins and blue-eyed shags, before setting foot on the continent at Prospect Point.

It’s then back to the boat to cross the Bellingshausen Sea, a stretch of pack ice around the edge of the Antarctic continent. Within this stretch of icy waters, you’ll find Peter I Island, named after the Russian Tsar when it was discovered in 1821. Initially claimed by Norway, but eventually becoming its own territory, Peter I Island is usually skipped over by expeditionary vessels due to its exposure to the elements. Nevertheless, the M/V Ortelius is fully-equipped to helicopter passengers to the island if weather permits.

Continue your Antarctica vacation by sailing through the Amundsen Sea, on the fringes of the pack ice. You’ll pass along the west-flowing Antarctic coastline, spotting Emperor penguins and fur seals straggling on the ice floes. If you’re lucky, you might even see orcas and minke whales breach the icy waters.

Pass into the Ross Sea, known for the floating ice shelf with 30m-high fronts and subzero temperatures. You’ll spend a week exploring the terrain of the Ross Sea. Stop off in the Bay of Whales to see where Roald Amundsen reached the ice shelf in 1911 while en route to being the first person to reach the South Pole. On Ross Island, you’ll find the tallest peak on the continent, Mt. Erebus, which towers over Mt. Terror and Mt. Byrd, even as all three are famous spots for expeditions.

At Cape Royds, you’ll find the cabin of Ernest Shackleton, with old gear and even canned goods from Shackleton’s expedition filling the walls, preserved by over a century of cold. At Cape Evans, you’ll find the cabin of Robert Falcon Scott, where Scott stayed before achieving the South Pole. In the Ross Sea, you’ll be able to take full advantage of the M/V Ortelius’ helicopters, flying high over the Taylor Valley to see one of Antarctica’s famous Mars-like valleys, and connecting to various parts of the continent by air if sea conditions are treacherous.

You’ll close out your Antarctica vacation by attempting a landing at Cape Adare, where people first wintered on the Antarctic continent. The island is home to the largest colony of Adelie penguins in the world. Pass through the Southern Ocean and say goodbye to the continent with a final landing at Scott Island if weather permits. It’s then on to Campbell Island, a sub-Antarctic New Zealand Reserve that abounds with vegetation and all manner of penguins and seafaring birds. You’ll spot Eastern Rockhopper, Erect-Crested, and Yellow-Eyed Penguins while exploring the island. Disembark in Bluff, New Zealand, where you can extend your adventure by connecting to the rest of the country, or depart for home.

In the afternoon, you will board your vessel in Ushuaia, Tierra del Fuego, Argentina, the southernmost city in the world and sail through the Beagle Channel and sail through this scenic waterway and head out towards the Drake Passage and the beginning of your Antarctic Adventure.

Today is spent familiarising yourself with your vessel as well as meting your like-minded fellow Globetrotters.

Continue across the famous Drake Passage.

You arrive in the Antarctic Peninsula and in the morning sail through the spectacular Lemaire Channel and land on Pleneau Island, where fur seals may haul-out on the beaches. Gentoo Penguins, Kelp Gulls and South Polar Skuas are confirmed breeders. Pleneau Island was first charted by the French Antarctic Expedition of 1903-05 of Jean-Baptiste Charcot and was named after his expedition's photographer Paul Pleneau. You will also visit Petermann Island with colonies of Adelie and Gentoo Penguins and Blue-eyed Shags. Petermann Island was named after the German geographer August Petermann who was a member of a German Expedition in 1873-74.

Sailing south through the Penola Strait, we arrive at the Fish Islands. The small islands lying east of Flouder Island are called the Minnows, first charted by the British Graham Land Expedition (1934-37) of John Rymill. You may observe Adelie Penguins and Blue-eyed Shags among myriads of large icebergs. You may set foot on the Continent for the first time in the stunning setting of Prospect Point.

Sail the Bellingshausen Sea where the first pack-ice may be seen.

In Norwegian Peter I, is an uninhabited volcanic island (19 kilometres long) in the Bellingshausen Sea. It was discovered by Fabian von Bellingshausen in 1821 and was named after the Russian Tsar Peter I. It is claimed by Norway and considered a territory on its own. It is very rarely visited by passenger vessels due to the exposed nature of the place. If the weather conditions allow, a attempted helicopter landing on the glaciated northern part of the island will be attempted.

These following days are spent sailing through the Amundsen Sea along and through the outer fringes of the pack-ice, while taking advantage of the west-flowing Antarctic coastal current.

The sailing along and through the ice is very lively, with sightings of single straggling Emperor Penguins, groups of seals on ice-floes, and also Orca's and Minke Whales along the ice-edge, often accompanied by different species of fulmarine petrels.

You now approach the Ross Ice Shelf, a floating mass of land-ice, with a front 30 meters high. In the Bay of Whales at the eastern side of the shelf, close to Roosevelt Island (named by the American aviator Richard E. Byrd in 1934 for President Franklin D. Roosevelt), Roald Amundsen gained access to the Shelf and ventured to the South Pole, where he finally arrived on 14 December 1911. Also the Japanese explore Nobu Shirase had his camp in this area at Kainan Bay in 1912. We intend to attempt a helicopter landing on the Ross Ice Shelf if conditions allow for it.

Continuing along the Ross Ice Shelf we sail to the west.

In the Ross Sea you will visit Ross Island, guarded by Mount Erebus - the tallest peak on the continent - Mount Terror and Mount Byrd with all the famous spots which played such an important role in the dramatic British expeditions of the last century such as Cape Royds with the cabin of Ernest Shackleton.

You will visit Cape Evans with the cabin of Robert Falcon Scott; from Hut Point, Scott and his men set out for the South Pole. If ice blocks access and weather conditions are otherwise favourable, you have the option to use the helicopters to land in one or more places in this area.

You will make further attempts to visit the US-station McMurdo and Scott Base - the New Zealand equivalent. From McMurdo Station there is chance to hike 10 km to Castle Rock were you will have a great view across the Ross Ice Shelf toward the South Pole.

Land by Helicopter in Taylor Valley, one of the Dry Valleys. The conditions here are the closest you get to the conditions on Mars anywhere on Planet Earth.

Sailing northward along the west coast of the Ross Sea, we pass by the Drygalski Ice Tongue and the Italian Mario Zucchelli Station in Terra Nova Bay.

There will be an attempt to make a landing at Cape Adare. This is the place where people for the very first time wintered on the Antarctic Continent. The hut where the Norwegian Borchgrevink stayed in 1899 is surrounded by the largest colony of Adelie Penguins in the World.

Working our way through the sea-ice at the entrance of the Ross Sea and start our journey north through the Southern Ocean. Depending on weather conditions we may opt to set a course sailing by Scott Island.

You will visit the sub-Antarctic New Zealand Reserve and a UNESCO World Heritage Site of Campbell Island, with a luxuriant and blooming vegetation. The fauna on Campbell Island is fantastic with a large and easily accessible colony of Southern Royal Albatrosses on the main island and breeding Wandering, Campbell, Grey-headed, Black-browed, and Light-mantled Albatrosses on the satellite islands. Also three penguin species, Eastern Rockhopper, Erect-Crested and Yellow-Eyed Penguins breed here. In the 18th century seals were hunted to extinction, but Elephant Seals, Fur Seals and Sea Lions have recovered.

You arrive in Bluff, New Zealand where you disembark for your return flights home; but why not explore New Zealand or pop over to Australia for a welcoming beer and BBQ.