MODERATE | PRIVATE-GUIDED: The truly amazing treasures of Angkor Wat deserve several days to reveal their fascinating story. Many unique sites of this ancient city are spread out over the surrounding countryside. 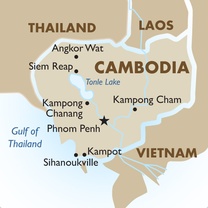 Naturally, number one on anyone’s list will be a visit to exciting Angkor Wat. It can be compared in importance as an archaeological site to Machu Pichhu in Peru or Petra in Jordan. Amazingly enough, although it has existed since the 12th Century AD, it was only rediscovered in the 19th Century. Originally covered by undergrowth, archaeologists unearthed it to find some spectacular sites. Angkor Wat was originally a city of over 1 million inhabitants but was abandoned many centuries ago. This 400 square kilometer/154 square mile Hindu temple complex is vast and is situated 6 kilometres/4 miles north of the town of Siem Reap. Angkor Wat literally means Temple City and was in fact a city built by the Khmer King Suryavarman the Second in the 12th Century.  Today it contains scores of temples, bas-reliefs and sculptures and is the largest Hindu temple complex in the world. It needs time to really take in all that is on offer here.

The first entry into the Angkor Wat complex brings you to the main temple called Angkor Wat, an absolutely magnificent large structure surrounded by a moat.  It is also known as the GrandTemple. Just behind it is Angkor Thom which was the capital city of the Khmer Empire. Here you will see the Terrace of the Elephants which is 350 metres/1150 feet long and was the stand for public ceremonies and the Terrace of the Leper King - the origin of the name is unknown.

Next visit Bayan, a series of temples richly decorated with massive stone faces carved onto the towers. Other visits are to Ta Prohm which is an intriguing set of temples left in the way they were rediscovered in the 19th Century and covered by trees which have grown over them, Thommanon, a pair of Hindu temples, small but elegant in design and Preah Khan, an extensive area originally built as a monastery and teaching complex..

If all this seems a lot to cover in one day, then time allowing, consider extending your stay.

The next day, a further visit to Angkor Wat. This time, start with Banteay Srei situated 25 kilometrtes/16 miles north east of the main group of temples. The name literally translates as Citadel of Women. This is due to the so called fact that the temples here which have elaborate decorative wall carvings could only have been carved by women. Nearby is Banteay Samre, built with the same materials as Banteay Srei but with the use of special restoration methods is the most complete temple complex.  Later travel to Tonle Sap, the largest freshwater lake/river combination in the country. It is unique as the direction of the flow of water reverses itself twice a year. It is also home to ethnic Vietnamese and Cham people who live most often in floating villages earning their existence through fishing. There over 300 different species of fish in the lake.

Experience all that Siem Reap has to offer in this stylish international hotel. The Tara Angkor Hotel is an ideal base to explore Siem Reap and the magnificent temples steeped in legend and history. Tara Angkor is conveniently located on the road to Angkor only 5km from the entrance, 15 minutes from the airport and a short ride to the centre of town. The Tara Angkor with 213 rooms is also equipped with modern amenities and is elegantly furnished to make your stay luxurious and enjoyable.

This morning, you will visit the monumental magnificence of Angkor Thom, last capital of the Khmers, with its Elephant Terrace, the Terrace of the Leper King and the stunning Bayon temple. This 12th century masterpiece lies at the very centre of Angkor Thom and is an archaeological wonder of symmetry and grandeur. Continue to visit Thommanon, Ta Keo and Ta Prohm. Ta Prohm, the temple that has been left largely in it's natural state since its 're-discovery' by French explorers. Surrounded by jungle, its labyrinth of stone hallways is overgrown with the roots and limbs of massive banyan trees. This afternoon, you will visit to Angkor Wat, the largest temple in the world, with a volume of stone equalling that of the Cheops pyramid in Egypt. It is unlike all the other Khmer temples in that it faces west, and is inspired by 12th Century Hinduism.

This morning, you drive to Banteay Srei; the citadel of women - a tiny, enchanting temple, which is one of the jewels in this remarkable city. Built of red sandstone in the tenth century and dedicated to the Hindu god Shiva, the carved male and female figures in the niches are exquisitely executed in both style and proportion. This is the most Indian of all the temples in Angkor and in the words of H.W. Ponder, is a fairy palace in the heart of an immense and mysterious forest. Continue to Banteay Samre, is built under Suryavarman II and Yasovarman II in the early 12th century, it is a Hindu temple in the Angkor Wat style. Named after the Samré, an ancient people of Indochina, the temple uses the same materials as the Banteay Srei. This afternoon, drive to a development project teaching young adults, stone carving, wood carving and lacquer application, Les Artisans d' Angkor is a heart warming reminder that progress in Cambodia can go hand in hand with traditional crafts. Then continue to Ton Le Sap Lake, the largest fresh water lake in South East Asia, is the lifeblood of the Cambodian fishing industry. The Mekong River, from as a far away as Phnom Penh, reverses the direction of the Ton Le Sap river to bring an overflow of water and silt to support both rice growing and the breeding fish of many sizes and varieties. Hopping on board small shaded vessels and moving between the floating homes and small fish farms you will experience close up, daily lake life.