FIRST-CLASS | PRIVATE-GUIDED: After a tour of historic Cochin, board a private deluxe houseboat and explore the canals, rivers and lakes that make up this area. See typical rural life as you sail through the countryside. 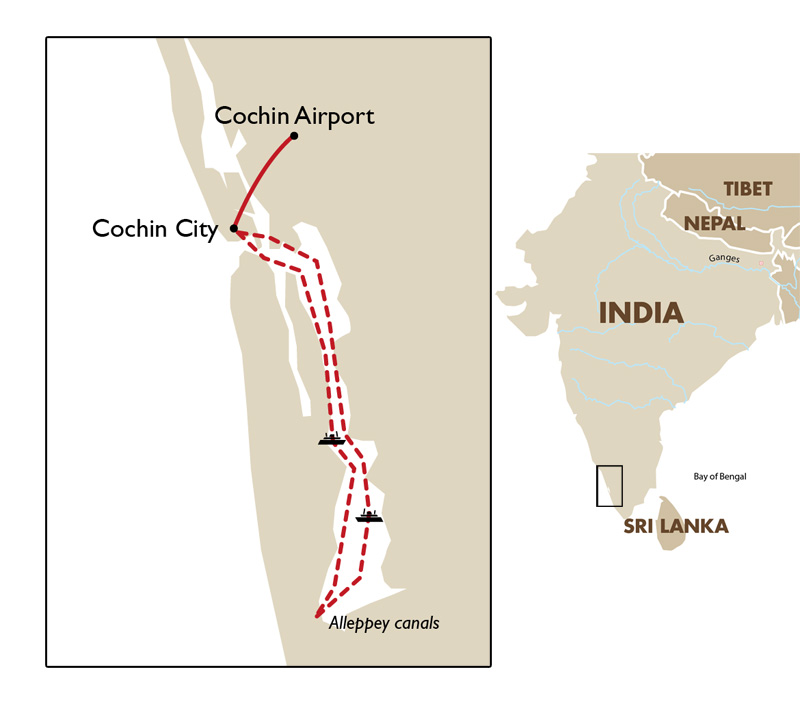 Cochin (also known as Kochi) has been an important trading port since ancient times. Today, the land of spices that attracted the European traders, is a quaint blend of the old and the new, the Indian and the Western. Popularly referred to as the Queen of the Arabian Sea, Cochin is today the commercial and industrial capital of Kerala. It has a rich heritage of forts, churches and temples.

You will enjoy two nights at the elegant and charming Travancore Hotel in Cohin. Some of the places visited during your stay are the Dutch Palace at Mattancherry, renowned for its wall murals depicting scenes from the Ramayana; Fort Kochi, though now in ruins and which contains many remains of Indo-European architecture; the Jewish Synagogue at the heart of what is locally called the Jew Town and which is a fascinating mixture of shops, warehouses and spice auction rooms; the St. Francis Church, the oldest European church in India, which stands as the pride of Fort Cochin and the Chinese fishing nets, seen on the coast, which are huge cantilevered fishing nets believed to have been brought to Kochi by Chinese traders. The first evening, enjoy a performance of a classical Indian Kathaki dance performance.  Kathakali recitals are emotive and narrative, and combine dance with dialogue to bring myth and legend to life in the temple courtyards of Kerala.

Last stop is the Backwaters of Kerala.  A network of meandering rivers, brackish lagoons, picturesque lakes and palm fringed canals. It is also a unique ecosystem where freshwater meets seawater. Start your cruise on a private deluxe houseboat owned and operated by the luxury hotel chain, Taj Hotels and sail on to Vembanad Lake, one of the largest lakes in India. Traditionally house boats were called Kettuvallam and used for carrying rice and spices. Today Kettuvallams have been converted into huge house boats used for cruising though scenic waterways and have become excellent accommodation floating over water. The houseboats are manned by a crew consisting of a captain, oarsman and a cook. As you cruise through the Backwaters and enter the Alleppey Canals, you will travel through beautiful scenery consisting of sleepy villages, rice paddies and lush vegetation. Alleppey backwaters is known as the Venice of the east and one of the most romantic experiences. This is a good opportunity to view local rural life. Anchored in the middle of nowhere, with only a cool silence in the air, you will enjoy one evening on board the house boat before returning to Cochin.

Malabar House is located in the heart of historical Fort Cochin, opposite St. Francis Church and a 3 minute walk to the Chinese fishing nets. This location is ideally suited for sightseeing, shopping and backwater cruises. The hotel has 17 unique rooms and suites.

Most of Cochin’s historic buildings are in Fort Cochin, constructed by Portugal's Alfonzo de Albuquerque in 1500. Albuquerque arrived with half a dozen ships bearing settlers and five friars, and built the first European church in India, St. Francis Church. Chinese Fishing Nets were actually introduced by traders from the court of Kublai Khan. They cantilever over the harbour, and operate by a system of weights and levers. The nets, on wooden frames, are raised periodically to check the catch.

Your will then proceed to the Santa Cruz Cathedral. On the same square, and in striking contrast to the St. Francis Church, is the flamboyant 20th century Santa Cruz Cathedral – in an Indo-Romano-Rococo style. The cathedral is one of the oldest churches in India and also one of only eight basilicas throughout the country. When the Dutch conquered Cochin in 1663, they ruined all Catholic establishments except this one. Although destroyed later and rebuilt the existence of this cathedral goes back five centuries!

Visit the Pardesi Synagogue, a tiny but delightful structure built in 1568. They then continue to Mattancherry or “Dutch Palace” which houses a remarkable series of murals rich in color and with painstaking detail. The surrounding area still called Jew Town. Spend time is spent in exploring a fascinating mix of so called antique shops, warehouses, and spice auction rooms. Signs for N.X. Jacob’s tailor shop, and the offices of J.E. Cohen serve as reminders of a once thriving community, now consisting of about seven families.

This evening, head to a local theatre and where you will witness this traditional dance performance. Kathakali is one of the oldest theatre forms in the world and it originated in the area of south-western India now known as the state of Kerala. It is a well-developed dance-drama, where the actors depict characters from the epics Ramayana and Mahabharata. The Kathakali dance performance is very dramatic and is enacted with elaborate masks and costumes. Kathakali recitals are emotive and narrative, and combine dance with dialogue to bring myth and legend to life in the temple courtyards of Kerala.

A traditional Kathakali performance begins in the evening and continues throughout the night, culminating at the auspicious hour of dawn, when Good finally conquers Evil. Today, however, this dance performance has been modified for the stage and the audience can enjoy this ritualistic theatre experience in the comfort of a plush auditorium, within the span of a couple of hours.

Board your private deluxe houseboat. Cast off and cruise across Vembanad Lake to enter the Alleppey canals. The canals are bordered by sleepy villages, rice paddies and palms. Cruise along lazily enjoying the beautiful scenery passing by and witnessing local rural life along the riverside. Watch fisherman drying nets as you pass traditional rice barges. If you wish, stop and visit a small village along the way, and there is also a chance to take a canoe ride. The evening will be spent alongside quiet rice paddies, onboard overnight.

Rejoin the larger canals, and proceed to the Boat Jetty. Here you will disembark.

It is possible for Goway to arrange larger multiple-bedroom houseboats if you are traveling with additional companions or family members/children. If interested, please inquire with your Goway destination specialist.