FIRST-CLASS | PRIVATE-GUIDED: Discover the highlights of Indonesia. Start on the island of Bali, where you’ll have plenty of time to relax between Seminyak and Ubud. Then travel to Java to visit Borobudur and Prambanan, some of the largest temples in the world. Cap it all off with a journey to Komodo to see the dragons. 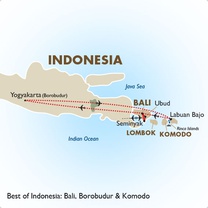 This 11-day Indonesian vacation takes you to the most exciting spots in the nation, including Bali, the temples of Borobudur and Prambanan, and the island of Komodo. It features a mix of first-class and deluxe accommodations and small group tours.

Your journey begins in Bali, the picturesque island that is famous across the world for its villages, beaches, and nightlife. Staying at the 5-star Alila Seminyak Bali on the peninsula in the country’s southwest, you’ll have several days at leisure to enjoy the pleasures of paradise. Spend your days in a lush accommodation mere steps from the waters of the Indian Ocean. Hit up the beaches each day to snorkel, swim, and suntan, or go surfing if you’re experienced at it (the waters can be a little choppy for first-timers). Take advantage of the excellent restaurants and shopping, as well as the popular nightclubs and bars that supply the famous Bali nightlife. You can also visit nearby Petitenget Temple to enjoy some cultural landmarks amidst the resort atmosphere.

Connect north to Ubud, a landscape of terraced rice paddies and traditional villages that offers a beautiful counterpoint to the busier southern peninsula. Staying at Maya Ubud Resort & Spa, you’ll enjoy a luxury location pitched between the Petanu River Valley and the rice fields of Peliatan. You’ll tour the mountains and lakes of the interior and the coastline on a full-day tour across the island. Do some light shopping at the fruit and flower market at Candi Kunung before visiting Ulun Danu Water Temple, a 17th-century structure with a cascading pagoda and peaceful waterside location. Continue into the sacred monkey forest of Alas Kedaton to surround yourself with curious monkeys before reaching Tanah Lot Temple, perched on a rock formation on the coastline and home to some of the most stunning sunsets in Southeast Asia. You’ll have another day at leisure in Ubud to explore the rice paddies, visit sacred temples, or relax back at the resort.

Fly to Yogyakarta on the island of Java and spend the day exploring its temple masterpieces, including Borobudur, the world’s largest Buddhist temple. This breathtaking construction from the 8th and 9th centuries took 75 years to complete and contains 72 stupas, each with intricate statues of the Buddha. After admiring this masterwork, continue to Mendut Temple, which is even older than Borobudur, and Pawon Temple before retiring for the day. You'll explore centres of Javanese culture at the Sultan’s Palace, known as Kraton, and the Taman Sari Water Palace. Then visit the other temple icon of Java, Prambanan, the largest Hindu temple in Southeast Asia and one of the most elaborate temples in the world. Admire the towering constructions with layered edifices and stand in awe of this masterful human achievement. Afterwards, you’ll connect onwards to Labuan Bajo on the island of Flores and visit the impressive cave system of Batu Cermin, with its dangling stalactites, before retiring.

On your final full day in Indonesia, you’ll head out for a boat ride to Rinca Island to disembark and search for endemic wildlife, including the Komodo Dragon, the world’s largest lizard. If you aren’t lucky enough to spot one, don’t worry, as afterwards you’ll head to Komodo Island to head on a tour that’s sure to take you up close to the dragons (but not too close). Cap off the day with a swim off Pink Beach before returning to Labuan Bajo.

After a final night, you’ll connect back to Bali and head to the airport to return home.

On arrival at Denpasar airport you will be met and transferred to the resort.

Unfurling along a pristine beach on Bali's southwest coast, mere steps from the Indian Ocean, Alila Seminyak Bali ups the ante on tropical cool. A stunning Seminyak beach resort that radiates sophistication, vibrancy and vivacity, offering an indulgence of luscious lifestyle facilities and refined spaces for chilling out in style.

Seminyak is known as the most sophisticated, fashionable and upscale beach area in Bali. Located on the western side of the island, the waters can be rough and any surfing here is for experts. It is reasonably secluded with a selection of good restaurants and boutique shops. In the evening, there is a lively ambience. One major attraction is the glorious, technicolour sunsets which can be experienced here. Nearby is the centuries old Petitenget Temple, well worth a visit.

Three full days to discover Bali at your own pace.

Maya Ubud Resort and Spa sits between the Petanu River Valley and the rice fields of Peliatan. With 108 luxury guestrooms and private pool villas, it is around a one hour drive from Bali's international airport. It is a leisurely twenty-five minute stroll from Maya Ubud to the colourful and bustling village of Ubud, with its fascinating market, art museums and galleries, shopping boutiques and restaurants.

Full Day The Wonderland of Bali

This fascinating full day tour will take you to the highlands of Bedugul where you will visit the colorful fruit and flower market at Candi Kuning. Also see the nearby 17th century Ulun Danu water Temple, located on the shores of Lake Bratan, and the sacred monkey forest at Alas Kedaton. Here you can see hundreds of monkeys in their natural, forest habitat. The day ends with a spectacular sunset at the famous Tanah Lot Temple, built on a volcanic out-crop on Bali's rugged west coast.

Ubud is centrally located on the island of Bali and is one of Bali’s major arts and cultural centres.

Comprised of 14 villages, each run by its own banjar (village committee), and all within 5 kms of the city centre, Ubud is a fairly straightforward, small town situated amongst scenic rice paddies and steep ravines in central foothills of the Gianyar regency.

In the 8th century, Javanese priest, Rsi Markendya, meditated at the confluence of two rivers at the Ubud locality of Campuan. Here he founded the Gunung Lebah Temple on the valley floor, the site of which remains a pilgrim destination. A centre for natural medicine and healing, Ubud got its name from the Balinese word, ‘ubad’- meaning medicine.

Pick up at your hotel and transfer to airport for flight to Yogyakarta, Upon arrival at Adi Sucipto Airport Yogyakarta, our Tour Guide will be waiting for you at the main gate, holding the sign board with your name. After a warm welcome the guide will take you directly to proceed to explore famous Buddhist Temple of Borobudur, listed as one of the 7 wonders of the world, comprised of thousands of volcanic and river stone blocks. The temple was built in the 8th and 9th centuries entirely by human labor and took more than 75 years to complete. The walls and balustrades are decorated with fine low reliefs and the circular platforms are covered with 72 stupas, each containing a statue of Buddha. After your visit you continue with a visit to the nearby Mendut temple. Older than Borobudur, this pyramid-shaped temple houses three impressively carved stone statues. The statues are thought to be some of the most impressive and best preserved in their original location in Java. You'll also make a stop at Pawon temple, a jewel of Javanese temple architecture. Most probably, this temple served to purify the mind prior to ascending Borobudur. Return to hotel and Rest of the day is free at your own

This morning you start with a visit to the Sultan's Palace, also known as the Kraton. Built between 1756 - 1790, it is a fine example of traditional Javanese sultanate architecture. As you walk through the various rooms and chambers, you will learn more about this aspect of Javanese heritage and culture. From here you go by becak (this tricycle is the typical local transportation) to the adjacent Taman Sari water palace and garden. This addition to the royal complex was built over 200 years ago by the first Sultan with bathing pools for his harem and then continue to visit Prambanan Temple. The temple compound, a UNESCO World Heritage Site, is the largest Hindu temple site in Indonesia, and one of the biggest in Southeast Asia. It is characterized by its tall and pointed architecture, typical of Hindu temple style, and by the towering central building inside a large complex of individual temples. Then transfer to airport for your onward flight.

Arrive Labuan Bajo - Upon arrival at Komodo Airport Labuan Bajo on the island of Flores you will be welcomed by our local representative and transferred to your hotel. Later visit Batu Cermin Cave. Note, the visit to the cave requires step stairs and walking. Overnight in Labuan Bajo and have dinner at your hotel.

Meet your guide in the early morning and transfer to the harbour to take a local wooden boat ride to Rinca Island. Travel over the blue tropical waters passing hundreds of smaller islands, the boat rides takes approximately 2.5 hours. Upon arrival in Rinca Island, disembark and begin a guided tour to look for Komodo dragons and other types of wildlife such as deer, birds and water buffaloes. Then return to the boat and transfer to Komodo Island. At Komodo Island take a guided walk to Banuguluna, to see Komodo dragons. Afterwards, return to the boat and visit Pink Beach for some free time to relax, swim and snorkel. At the end of the tour return by boat to Labuan Bajo and drop off at your hotel.

Breakfast at hotel. At Leisure until transfer you to the Airport for next destination.