FIRST-CLASS | PRIVATE-GUIDED: Visit one of the world’s smallest and most unusual countries located on the slopes of the Himalayas - amazing scenery, colourful cities and fascinating cultures all on view. 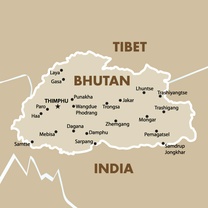 Sandwiched between India, China and Nepal, Bhutan is a unique country and was only opened up to the world at large in the 1970’s so some mystery still clings to it. It is approximately the size of Switzerland with a population somewhere between 650,000 and 1.4 million inhabitants. In other words, no one seems to be exactly sure.

Buddhism permeates Bhutan as can be seen through its monasteries, ubiquitous monks and the Tibetan-style culture which is everywhere. However, it also has some stunning scenery from snow-clad peaks (it is located in the central Himalayas) to wooded valleys, arable grasslands and jungles.  The visitor will also marvel at the beautiful and exotic flora and fauna.

On arrival at Paro airport, the afternoon’s sightseeing will include the National Museum of Bhutan and the fortress/monastery of Paro Dzong built in the 10th Century. Afterwards, head for the capital of and largest city in Bhutan, Thimpu. Sightseeing here includes the Chorten Memorial, the most visible landmark in the city with its white wooden structure, golden spires and bells built in 1974 to honor the King.

Time also allows a visit to the NationalHeritageMuseum, the attractive Nunnery and the Handicrafts Emporium which houses textiles, paintings, sculptures, wood carving, sword making and jewellery.

Returning to Paro, a day’s excursion will take you to Takshang also known as the Tiger’s Nest, a highly sacred hermitage located on the face of a 1000 metre/3250 feet high cliff. It is said that the father of Bhutanese Buddhism arrived here on the back of a tiger.

Welcome to the Kingdom of Bhutan! You will be met at the Paro airport by your guide. Transfer to Thimpu (1 hour), stopping en-route in the Paro Valley for lunch, and to visit the National Museum and the Paro Dzong. The remainder of the day is free to explore the lively town of Thimphu.

A small bustling city in the heart of the Himalayas, Thimphu's charm comes not only from its wealth of museums and places of historic interest, but also from its strong national character. It was once known as the only capital city in the world without traffic lights! Today's sightseeing begins with a visit to the Folk Heritage Museum, a restored mid-19th-century house which gives insight into a typical Bhutanese household and lifestyle. Continue to Zorig Chusum (the 'Painting School') and the Thangtong Dewachen Nunnery. After lunch, visit the Memorial Chorten, completed in 1974 as a monument to peace. It houses a number of religious paintings and tantric statues. Make a stop at the Gagyel Lhundrup Weaving Centre, then a traditional handmade paper factory. The paper here is made from the bark of the black Daphne tree and you can witness the process from start to finish. In the late afternoon, visit the Trashicho Dzong, an impressive fortress which houses the throne room of the King and various government offices. It is also the summer residence of the Chief Abbot of Bhutan and the central monk body. If your visit falls on a working weekday, arrive in time to watch the hoisting of the National Flag and the March of the Guards. Return to your hotel and the evening is at leisure.

Visit the local market this morning, then proceed to the spectacular Takshang Monastery ('Tiger's Nest'), which clings to a sheer cliff above the Paro Valley. One of the most venerated sacred sites of the Himalayan world, the buildings enshrine a cave where the great saint Guru Rinpoche meditated. Legend says that he flew here from Tibet on the back of a tigress. Enjoy a 4-hour hike with your guide, then continue on to the town of Paro and the remainder of the day is at leisure.

This morning, transfer to the airport for your onward flight.