FIRST-CLASS | PRIVATE-GUIDED: Experience the best of Southern Vietnam. Take in the highlights of Ho Chi Minh City, explore the Mekong Delta's small waterways and islands by boat and bicycle, and then unwind with a blissful beach stay along the coast. 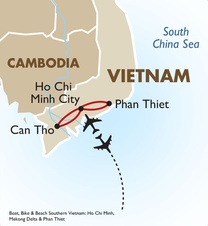 This 10-day first-class, private-guided tour is perfect for active travelers looking for a unique experience. Starting in lively Ho Chi Minh City and heading south, you will explore the Cu Chi Tunnels. Can Tho and Phan Thiet, with lots of opportunity to explore, bike and relax on the beach at your leisure.

After your arrival in Ho Chi MInh City, you can enjoy a night of leisure before a full day of visiting the Cu Chi Tunnels, a network of extremely narrow tunnels built underground during the Second World War and expanded during the Vietnam War by the Viet Cong. In the afternoon, embrace the chaos of the city. Your guide will show you all the sites of interest from French Colonial times, such as the Notre Dame Cathedral Basilica of Saigon, to the war monuments such as Reunification Palace.

From here, make your way to Can Tho at the heart of the Mekong Delta. En route, you will get to explore this peaceful area in a traditional boat and sample some of the produce grown on the surrounding farms. The next morning is an early start at a floating market and an afternoon bike tour starting at Cai Son Canal. The bike tour takes in some of Vietnam's prettiest, lushest green scenery and gives a glimpse of day-to-day life.

Back to Ho Chi Mihn City for a night before you make your way to the sunny beaches of Phan Thiet. This quiet fishing village on the southeast coast is a strong finish to your tour as your first day is an adrenaline-inducing 4X4 jeep safari over the tall sand dunes and a trek to the Fairy Springs to see the amazing view. Two more days are yours to explore the area as you chose. Try watersports, hike or just chill out on the beach.

Private transfer to the airport on your final day for your onward travels.

Synonymous with the Vietnam War and a testament to the determined spirit of the Vietnamese, the underground network of passages at Cu Chi is a fascinating day trip out of the city.

Work on the tunnels began during the war against the French in the 1940s and over the next 25 years as the conflict with America escalated, they were improved and expanded to create an underground city of meeting areas, storerooms, living quarters and much more. The tunnels allowed the Viet Cong to control a vital area of South Vietnam and at their height, extended for more than 200KM in length and stretched from what was then Saigon to the Cambodian border.

Preserved as a memorial park, a small section of this remarkable network is open to the public and there is the option to go below the surface to visit the tunnel first hand. There is plenty of interest above ground as well and it is recommended to bring good footwear, sunscreen and a hat. Please note you may get a little dusty if you decide to go underground.

Return to city for lunch at a local restaurant. The first stop on this afternoon's itinerary is Reunification Palace. Formerly named the Presidential Palace, this important city landmark was assured its place in history on 30th April 1975, when the first North Vietnamese tanks rumbled past, signalling the Fall of Saigon and ultimately the end of the Vietnam War. Now a museum complete with period meeting areas, war rooms and a basement communication centre, after your visit, walk the short distance to Notre Dame Cathedral. At the centre of HCMC's government district, this romantic church dates back to the late 19th century and is a popular backdrop for wedding photographs. Across the street from the cathedral is the city's striking French colonial-era post office, whilst Hotel de Ville de Saigon, officially Ho Chi Minh City Hall, is another of the city's most prominent buildings. The Museum of Vietnamese History is housed in yet another fine example of Sino-French architecture. Dating back to the 1920s, it contains an excellent series of exhibits dating from the Bronze Age to the Nguyen dynasty, the last ruling family of Vietnam.

As an alternative to the Museum of Vietnamese History, visit the elegant Fine Arts Museum with its impressive collection of ancient and modern art and sculptures, or the War Remnants Museum, which is primarily dedicated to the Vietnam War but also includes exhibits dating back to French colonialist period and the first Indochina War.

The final stop today is the unforgettable Jade Emperor Pagoda. With the pungent smell of incense hanging heavy in the air and an interior packed fall of ornate carvings and fierce-looking statues, this Taoist temple is one of the most atmospheric places of worship in the city. Transfer back to your hotel after your visit or alternatively be dropped off at Ben Thanh market for personal exploration and a spot of souvenir hunting.

Ho Chi Minh to Can Tho

Travelling by road south of Ho Chi Minh City (a journey of approximately 2.5 hours) journey into the Mekong Delta to the riverine town of Cai Be. Here you will board a motorised sampan, a traditional bamboo-covered wooden boat and begin your exploration of one of the country's most enchanting landscapes.

Continue across the upper reaches of the river exploring the beautiful riverine landscapes and observing typical life in the Mekong Delta. The region is rich with fruit orchards and depending on the season, there will be the opportunity to taste some of this tasty tropical produce. Following lunch at a local farmer's home, explore a little of the village before returning to your boat for the leisurely cruise through the maze of waterways to Vinh Long. From here, continue by car to Can Tho, the Delta's economic hub.

On arrival, check in your hotel in Can Tho and enjoy the rest of day at leisure. Dinner is on your own arrangements. Overnight in Can Tho (2 nights).

Early morning, as the sun rises above the Mekong Delta, is one of the most captivating times to be on the river. Take a sampan ride into the heart of Cai Rang floating market where boats, laden with fruits, vegetables and all manner of groceries, jostle for space and vie to sell their wares. Returning to Can Tho town, visit a Khmer pagoda and Binh Thuy Ancient House before enjoying lunch at a local restaurant. This ancients house is one of the very few remaining examples of 19th-century residences in the Mekong Delta. Built in 1870, the privately owned house is now managed by the sixth generation of the Duong family and combines European and Asian styles.

This afternoon, transfer to Cai Son canal for a biking tour. A stop en-route to see noodle mills, boat making wood workshop. Next, go on to Rau Ram Creek - biking along the narrow village roads - over here, enjoy the tree gardens laden with fruits, also hear the birds singing; cocks warbling at sunset, pass the monkey bridges and sometimes catch the picture of children bathing in the river, ladies rowing boat to bring fruit home after harvest. Enjoy the full of plainness, quietness of the southern countryside and hospitality of the Mekong delta locals. Stop over an orchard to enjoy some Mekong fruit and tea. Then, continue to ride back to the meeting point and transfer back to the hotel by car.

Overnight in Can Tho.

Can Tho to Ho Chi Minh

This morning, return to Ho Chi Minh City by car.

At one of Vietnam's most idyllic seaside resorts, 200 km (124 miles) north of Ho Chi Minh City, the four star Victoria Phan Thiet Beach Resort &amp; Spa is located beside a vast, palm-fringed private white sand beach on the South China Sea. With bungalows set in exotic gardens designed in the style of traditional Vietnamese country houses. The resort is close to Phan Thiet, a charming fishing village with archaeological remnants of the Cham Empire, and the beach is backed by desert-like sand dunes that are home to rare flora and fauna.

Departing your hotel or resort in Mui Ne by jeep to White sand dunes and Lotus Lake which is about 45 km from Phan Thiet city. Let's try to be the first people who conquer the white sand dunes which is also called the tiny desert.

Conquer the highest hills and choose a good place to see the sun rising slowly in the East. Take a short nap at the lotus lake before we continue our itinerary. After your visit continues to the red sand dunes. This place is very famous and brings inspiration for many well-known photographers and photograph products.

Continue to Mui Ne fishing village where you will see hundreds of boats of fishermen that coming back from fishing. Local bustling seafood trade of sales and buy is also taken place here around 5 to 7 in the morning. On the way back to the hotel, using the jeep to explore the dunes before visiting a vantage point with commanding views of the surrounding area as well as the unusual rock formations at Fairy Spring (Suoi Tien) en route back to your hotel or resort. Reaching the spring involves a scenic wade of approximately 30 minutes up river and suitable footwear is advisable.